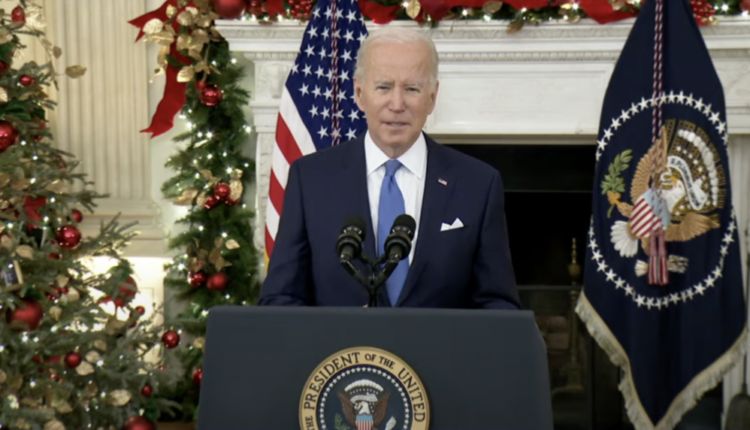 Sure, things seem bad. But there are some reasons to be cheerful in 2022 | Bruce Ledewitz

The phrase “looking forward” can simply mean making predictions about coming events. I do mean to do that in this column. But the phrase can also connote a welcome expectation of positive development.

That is how I mean it here. I believe 2022 will be a very good year for America and the world. I am looking forward to it.

So, this column aims to rebut the feeling of gloom that has unjustifiably dominated the tone of public life. Even if President Joe Biden is no FDR, it is still true that the only thing we have to be pessimistic about is pessimism itself.

The first matter must be the SARS-CoV-2 virus, which, even before the arrival of the omicron variant of COVID-19 disease, continued to spread all over the world. On Friday, Dec. 24, Pennsylvania reported a record 13,286 new covid cases.

Yet, for most fully vaccinated people, the virus has already been medically defeated. Evidence suggests that the omicron variant is less dangerous than earlier forms of the disease. Dr. Anthony Fauci said in an interview that he expects fully boosted people either to be protected from infection or to experience only mild symptoms.

And newly available drugs are now able to treat such mild symptoms. That means for most of us, COVID-19 is now less dangerous than the flu.

I don’t mean to discount the millions of unvaccinated Americans who are going to be exposed to hospitalization and death from COVID-19. But they continue to have access to life-saving vaccines. And, eventually, even in our partisan-addled national life, they will see the positive results and get vaccinated, mandates or not.

The major issue for the rest of us is what you can call the NHL paradox. Just before Christmas, hockey experienced a surge in COVID-19 cases. Because of that, the league took its Christmas break two days early.

But because of the effectiveness of its vaccination protocols, there were actually few or no symptoms in these cases. Calgary Flames head physician Dr. Ian Auld said of the 19 players in COVID-19 protocols, “overwhelmingly, our cases so far have been either asymptomatic or mildly symptomatic,” with players recovering after 36 to 48 hours.

Then why cancel games?

Like hockey, the rest of us have to figure out how to live in a world in which we probably won’t become infected and even if we do, the experience will be no worse than a cold.

In 2022, we will finally have the luxury of figuring out how to flourish in that world. Whatever our adaptation, happier days are on their way.

Well, then, what about the economy, especially inflation, which has so unnerved the American public? Expectations that inflation would quickly subside proved to be wrong in 2021, which saw prices surge at an annual rate of almost 7%, a level not seen in 40 years.

But although the persistence of inflation proved surprising, its source was just what experts said—increasing demand for certain goods that industry was unable to satisfy. Rising prices are supposed to happen in that situation to stimulate more production.

And that is just what is happening. Gas prices, which is what most people first noticed, have stopped rising. U.S. oil and gas production is ramping up, with more active rigs now than at any time since April 2020. The coming year will see much better news on the inflation front.

Aside from inflation, the economic news was not bad in 2021. Forecasts for 2022 anticipate a growth rate of from 3-4%, a modest, but solid rate that will draw idled workers back to jobs without major disruption.

No reason for gloom here.

Nevertheless, the dark national mood, whether objectively justified or not, could well lead to Republican victories in 2022 and, given Joe Biden’s falling poll numbers, complete control of Congress and the presidency by 2024. Former President Donald Trump could even return.

Meanwhile, Biden’s legislative initiative—Build Back Better—is stalled, voter protections are blocked by the filibuster and Roe v. Wade is about to be overturned.

So why not be gloomy?

But even in the realm of government and politics, pessimism is overstated. Yes, the Republicans may retake Congress in 2022. But Republican control is always less attractive to voters than Republican promise. Majority status will remind voters that the deadlock in Washington is not really the result of U.S. Sen. Joe Manchin’s, D-W.Va., recalcitrance, but is primarily caused by Republican determination to block any Biden initiatives.

And there is reason to think that Trump will not make a comeback. Newly elected Virginia Gov. Glenn Youngkin gave the GOP a model of winning without Trump, which the Party may well embrace in the new year.

Overturning Roe will undoubtedly cause hardship to many women. But such a decision will only return abortion to the realm of politics. In many states the right to choose will continue to be the law by statute. Abortion will thus remain available to women living in those states and to women who are able to travel there.

Beyond all the specifics, there is also a general sense that our best days are behind us. Just google “Decline of the West.”

If you do, however, you will be reminded that the decline of the West has been predicted for a long time. Oswald Spengler published his famous work by that title  100 years ago. The definitive two-volume edition appeared in 1923. Our system of limited government, democratic politics, private economy, free trade and the rule of law has proved quite successful and resilient. It has accommodated serious critique and reform. It is the system that gave us our vaccines.

Maybe deficits do matter after all | Bruce Ledewitz

It is hard to be in decline when no one else is in ascendance. The rule of the strongmen—Putin in Russia, Erdogan in Turkey, Modi in India—is not succeeding. Nor does Xi in China offer an attractive model. Party control of the economy helped China achieve world-power status. But that system did the same for the Soviet Union before it faltered. There is plenty of evidence that authoritarian control and a command economy are proving equally unsustainable for China.

What actually happened is not that our system failed but that we lost faith in it. When the challenges came—Trump, Brexit, immigration—we simply surrendered to our fears.

I am looking forward to 2022 as the year we recover from those fears and begin to move into a much more positive and hopeful future.

Opinion contributor Bruce Ledewitz teaches constitutional law at Duquesne University Law School in Pittsburgh. His work appears biweekly on the Capital-Star’s Commentary Page. Listen to his podcast, “Bends Toward Justice” here. His latest book, “The Universe Is On Our Side: Restoring Faith in American Public Life,” is out now. His opinions do not represent the position of Duquesne University Law School.