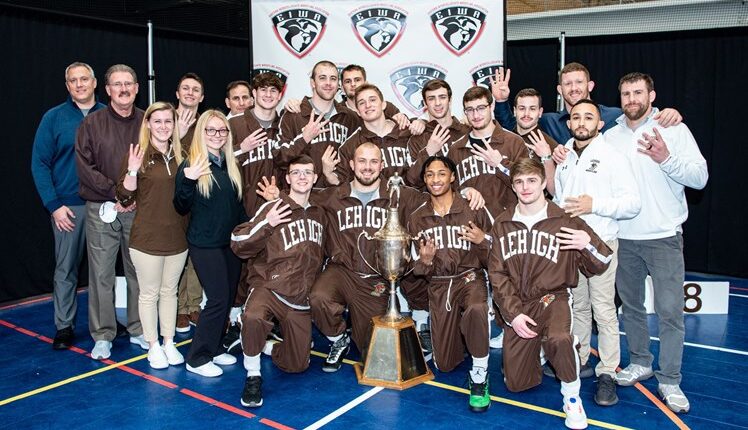 The seven Lehigh grapplers were among the 59 athletes who were honored from the 10 schools that took part in the EIWA championships in 2021. To qualify for the award, a student-athlete must have a cumulative grade point average of 3.20 and have participated in the EIWA Championship or have achieved a cumulative GPA of 3.0 and qualified for the NCAA Championship through EIWA.

Logan owns the top Lehigh Awardee GPA with 3.82 in business. He finished fourth in the EIWA championships and went 1-2 on his first trip to NCAAs.

Ammerman was next with a 3.48 GPA in energy systems engineering. He graduated in mechanical engineering last May. Ammerman made his season debut at the EIWA Championships, qualifying for NCAAs in fifth place at 184. He went 2-0 in his lone career NCAA appearance.

Meyer and Frinzi were NCAA qualifiers for the first time, finishing third and fourth in their respective weights. Meyer finished third with 165 and has a 3.34 in mechanical engineering, while Frinzi was fourth with 157 and has a 3.33 in business.

Lane has a cumulative GPA of 3.10 and is studying Supply Chain Management. He won his first EIWA title with 125 and went 2-2 on his first appearance in the NCAA championship.

Jakobsen finished his final season in brown and white with an EIWA title at 197 and went 2-2 on his third NCAA appearance. He has a 3.00 GPA with an emphasis on health, medicine and society.

Lehigh won his fourth EIWA team title in a row and the 38th overall in February. The Mountain Hawks placed all 10 wrestlers and qualified all 10 entrants for the NCAA championships.