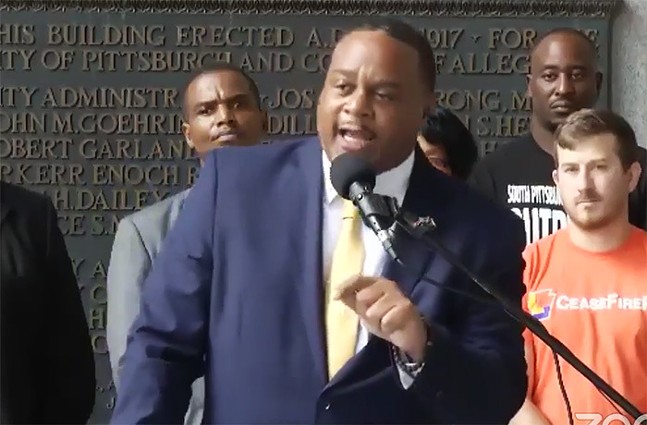 PITTSBURGH — Mayor Ed Gainey signed an executive order on Tuesday directing the city of Pittsburgh’s finance and law departments to review all tax-exempt properties in the city, to ensure their tax-exempt status meets the state’s legal requirements.

“In the City of Pittsburgh, 34 percent of the property is designated as tax-exempt, that is, the owners are not paying any property taxes,” Gainey said in statement. “The only properties that should not be subject to property taxes are those owned by purely public charities — places where people who are down on their luck get the services they need, mostly for free.”

He pointed out the new Second Avenue Commons homeless shelter as an example of a purely public charity, and a “huge help to our community.”

Churches and religious institutions will not be included in the review, Gainey added, and the review won’t affect a charity’s tax-exempt status under federal law.

While the mayor’s order doesn’t name any specific entity, it comes less than a week after a new report, published with state Rep. Sara Innamorato D-Allegheny, and U.S. Rep. Summer Lee, D-12th District, questioned the tax-exempt status of the UPMC hospital network.

In a tweet, Lee praised Gainey for the executive order, saying the people of western Pennsylvania “deserve confidence that their tax dollars are reinvested in our communities — not cheated by entities raking in revenue double the NFL’s.”

During his mayoral campaign in 2021, then-candidate Gainey was an outspoken supporter for getting UPMC to pay what he saw as its fair share in taxes.

“They should pay tax, period,” Gainey told the Capital-Star in 2021. “This is not picking on UPMC; their ability to pay taxes helps everybody.”

He said at the time that he would be willing to take UPMC to court, but questioned whether there was the political appetite in Pittsburgh for taking on that kind of fight. The health system has a total of 92,000 employees across Pennsylvania, Ohio, New York and Maryland, and as of the end of 2021, 53,000 employees in the Pittsburgh area, making it the region’s largest employer.

And Gainey is not the first Pittsburgh mayor to try to get UPMC and other nonprofits to pay taxes to the city.

In 2013, former Mayor Luke Ravenstahl filed suit seeking to strip the healthcare system of its tax-exempt status, but the suit was dropped a year later by his successor, Bill Peduto, who took a different approach.

In 2021, Peduto launched the OnePGH initiative, which sought to gather voluntary multimillion-dollar contributions from the city’s largest nonprofits, including UPMC, Carnegie Mellon University, Highmark Health, and the University of Pittsburgh. Gainey pulled the city out of OnePGH last year.

Under Pennsylvania law, to receive tax-exempt status, an institution “must donate or render gratuitously a substantial portion of its services” to people in need, and “operate entirely free from private profit motive,” as Gainey’s order notes.

Pittsburgh’s finance and law departments will examine all the tax-exempt properties owned by charitable organizations within the city, and will use “judicially approved standards under Pennsylvania law to guide their review,”, taking legal action if the properties are determined to be owned by institutions that don’t meet the purely public charity requirements.

“For years, I’ve advocated that the nonprofits in our state be held to the standard of the statute,” state Rep. Dan Frankel, D-Allegheny, told the Capital-Star. “It’s been clear to me for years that UPMC is the poster child for receiving all the benefits, but does not meet the standard and spirit of being a purely public charity.

“I understand where there is a concern from the mayor to find a way to make large nonprofit  entities … who effectively behave as for-profit entities … to pay their fair share,” Frankel said.

Innamorato, also a candidate for Allegheny County executive, thanked Gainey for the review in a tweet, saying “a county for all requires every person and entity to pay a fair share.”

And state Sen. Jay Costa, D-Allegheny, said in a statement that the city relies on property taxes to deliver public services. “It’s crucial that every public charity [demonstrates]  that it’s holding up its end of the bargain and meeting its charitable organizations to our friends and neighbors.”

The city set up an email address where residents can send information about a property owned by a nonprofit that may not meet the requirements of the law.

“We are asking our residents to help us in this endeavor,” Gainey said. “You are in the neighborhoods and you know what is really going on in your communities. If you think that a charity is getting out from paying taxes when they don’t deserve it, please let us know.”

Office of Transformation and Opportunity aims to be ‘one-stop shop’ for Pa. businesses

Lehigh Looks to Bounce Back Against Holy Cross on Wednesday