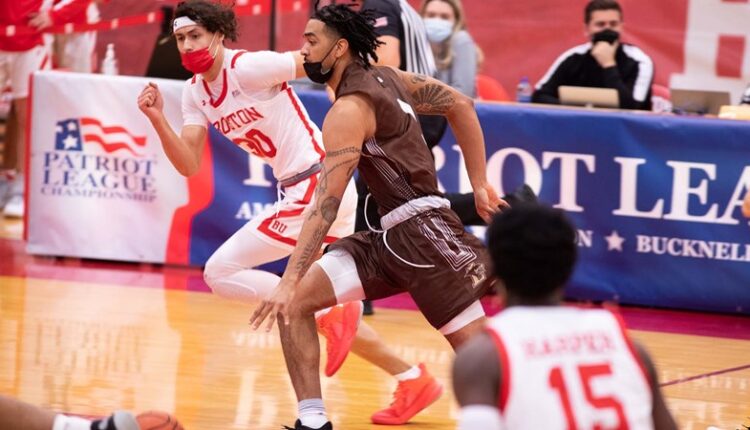 BOSTON – No. 7 Seed Boston University took advantage of a 16-3 run that spanned the end of the first and the beginning of the second half to cause a split when the Lehigh men’s basketball team ended the season on Wednesday evening with a 69: 58- Seeing defeat in the first round of the Patriot League tournament. Less than four minutes behind 60-42, the Mountain Hawks ran a 13-4 run to draw within 64-55 with 1:20 still on the clock, but Jonas Harper responded with a 3-hand on the other end to erase any doubts.

“This was a game that was really hard to get on half the pitch,” said Lehigh’s head coach Brett Reed. “We tried to increase the pace by going through several sides of the floor. When we were able to increase the pace a little in transition we were able to at least get some points on the board, which was vital I give a tip of the cap to our boys because they kept fighting.

Senior Marques Wilson led the Mountain Hawks in the scoring (19 points) and in the rebound (8). Junior Jeameril Wilson hit a season high of 17 points off the bench while second Jakob Alamudun was also a big spark, scoring 10 on 3-of-3 and 4-of-4 from the free throw line.

Lehighs Bank accounted for 32 of the team’s 58 points on the evening.

The Mountain Hawks took an early 4-0 lead, but the Terriers responded immediately with five straights. For almost eight minutes, no team led more than one possession. Boston University made a run in the late first half to take a 25:19 lead with 2:56 on the clock. After Jeameril Wilson scored two field goals (within 27 seconds), the Terriers responded with a 6-0 run and ended half-time with a margin of 31:23.

This and a basket finished the first half of @ jeameril_wilson with eight points. Don’t miss the second half on ESPN + https: //t.co/4xP1Cx06Aq pic.twitter.com/i7bMeZZEr0

Just over a minute in the second half, a 3-pointer from Marques Wilson Lehigh drew in seven at 33-26, but BU immediately scored the next eight to open his biggest lead at 41-26.

“I think we tried to play a few too many singles games during that time and we were frustrated,” said Reed. “You could see it on our boys’ faces and unfortunately we didn’t recover quickly enough. At the start of the second half we had some early sales and some missed opportunities and then unfortunately Boston University just seemed to run away at that point and it happened immediately which was really disappointing.

“Our guys had to be challenged as we went forward and I think they answered that challenge effectively. We just had too many game bags that weren’t effective enough.”

After BU opened its large lead, the Mountain Hawks didn’t go away and retreated several times within nine – 43-34, 45-36, and 47-38 – but couldn’t get any closer. In the middle of the verse, there was a stretch of more than three minutes in which neither team scored a goal.

How about this sly finish from Marques ?! @_M_W_II

However, as the second half of the year went on, Boston University built on its lead, eventually reaching 18 at 60-42. At this point, Lehigh scored 13 of the next 17 points, crowned by a Ben Li Dunk and Marques Wilson’s third 3-pointer to draw within 64-55, with 1:20 remaining.

Not that long ago, the Mountain Hawks are back within nine, with just over a minute over this @benli__ slam, followed by Marques Wilson (@_M_W_II) three.

“That was another year,” said Reed. “Although we didn’t get the result we wanted from a record standpoint, we’ve seen some growth from our team.

“We’re a young team that lost a lot of development opportunities and tried to figure it out without having a runway,” Reed continued. “As we took off, sometimes we didn’t necessarily flee and do so consistently. But there were some elements to build on. Provided these lessons are learned, we’ll go further and continue to show the attitudes that I’m really up to was proud to show our guys for the whole year, then it promotes a promising future. “