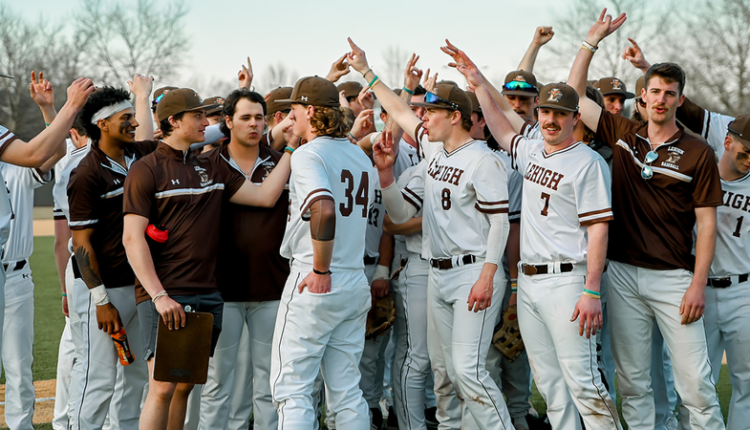 BETHLEHEM, Pa. – With less than 30 days until the Mountain Hawks open their 2023 campaign, the Lehigh baseball team has revealed its 2023 schedule, announced by the Peter E. Bennett ’63 Head Baseball Coach Sean Leary, on Friday afternoon.

The upcoming slate of games features 22 regular-season games at J. David Walker Field at Legacy Park and 25 non-league games starting with a three-game series on the road in Florida.
Lehigh kicks off the 2023 season at Bethune-Cookman Feb. 17-19 before traveling to Charleston, SC on Feb. 24-26 for a three-game series against The Citadel. The Mountain Hawks then head to Princess Anne, Md. for two games against Manhattan College, one game on March 3, the other on March 4, followed by a pair of games against the host, Maryland Eastern Shore, their first game on March 4 , and close out the weekend with one game on March 5.

The Mountain Hawks’ home opener at J. David Walker Field is set for Mar. 8 when they take on Coppin State before taking heading west to begin Spring Break with a four-game series at Utah Valley March 10-12. Once the Mountain Hawks return from Utah, Lehigh will play a home-and-home with Fairleigh Dickinson, at J. David Walker Field on March 14, and then in Teaneck, NJ on March 15.

Lehigh plays his first three-game series at home March 17-19 when the Mountain Hawks host Saint Peter’s, they will follow that up with a single contest with Penn on March 22 before opening Patriot League action that weekend.

Patriot League play begins on March 25 when the squad travels to Annapolis to take on Navy for a pair of games, then travels to Bucknell on March 26 for a doubleheader with the Bison. Lehigh hosts Villanova in a midweek game at Walker Field (March 28) for the first round of the Liberty Bell Classic, followed by four games against rival Lafayette, a single game on March 31, a doubleheader on April 1, capped off with one game on April 2 in The Rivalry presented by Lehigh Valley Orthopedic Institute.

Liberty Bell Classic action returns on April 4 with a second-round matchup against a team to be determined. An eight-game road trip follows, with a three-game series at the defending Patriot League champions, Army West Point on April 8-9. The Brown and White will head down to Baltimore to play one contest with Coppin State before heading up to Worcester to take on Holy Cross April 15-16. The road trip wraps up with the fifth and final game against Lafayette in Easton on April 19.

The Mountain Hawks will host Bucknell in a three-game series on April 22-23 to wrap up the season series before hitting the road for the last time in the season, with a trip to Towson for a midweek tilt on April 25.

Lehigh closes out the season with eight-straight home games, starting with the Midshipmen of Navy in a three-game series on April 29-30. The Mountain Hawks’ final non-league game will be against Division III Cairn on May 2, heading into the final weekend of the regular season with a doubleheader slated with Army West Point on May 6, followed by a twin-bill with Holy Cross to wrap up the year.

With 28 student-athletes returning to the fold from the 2022 iteration of the roster, 14 newcomers bring the roster total to 42 names ahead of the new campaign. Of those 28 returners, five are fifth-years which include two-time reigning Patriot League Player of the Year Casey Rother and two-time All-Patriot League selections Joe Gorla and Luke Rettig.

Latino Teens Are Deputized as Health Educators to Sway the Unvaccinated