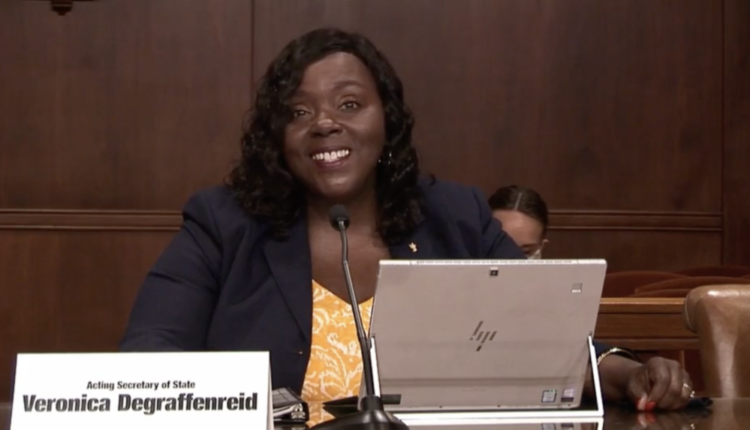 As Senate Republicans coordinate an investigation into Pennsylvania’s two most recent elections, an audit initiative is under review — 10 months after it launched — by an executive branch committee with election oversight.

Acting Secretary of State Veronica Degraffenreid and members of the Department of State’s post-election audit workgroup testified before the Senate State Government Committee on Tuesday to outline the risk-limiting audit, a post-election review piloted during the 2020 general and 2021 primary elections.

All counties are required to conduct a statistical sample of at least 2 percent of the ballots cast or 2,000 ballots following every election.

But 63 out of 67 counties conducted risk-limiting audits, a review developed by the workgroup that examines a random sample of paper ballots, and compares the paper votes to the totals reported by the vote-counting machines to ensure that the winner of the race is valid.

Neither type found evidence of widespread voter fraud or misconduct.

Any post-election review should be “transparent and bipartisan,” Degraffenreid told lawmakers. Although the risk-limiting audit is a pilot, she said the goal is to implement the review as an alternative to the 2 percent statistical sampling.

Lancaster, Greene, Beaver, and Franklin counties did not participate in the pilot.

She added: “What we’re looking to do for the counties, and for voters, is to certainly develop more robust post-election audits that would allow counties, with their limited time and limited resources, to certainly audit the outcome of an election contest, but at the same time, certainly give voters confidence that the outcome is the given outcome.”

Deputy Secretary of Elections and Commissions Jonathan Marks added that the risk-limiting audit is “part of a larger process” to ensure election integrity. The statistical sampling, he added, is also part of that process.

“There are statutory processes that counties have to go through, not only for absentee and mail-in ballots but also Election Day ballots,” Marks said. “And it includes fairly archaic tools, but they are the tools that are available, like checking the numbered list of voters, reconciling it against the poll book.”

Lebanon County Director of Elections Michael Anderson, a workgroup member, supports the risk-limiting audit because it allows the county to hand count a random sampling of ballots.

In 2020, a random ballot sample from different precincts, mail ballots, and absentee ballots “actually came out very close to what our results were,” he testified.

“We believe that the answer is to do a robust post-election audit and not an audit eight months after an election,” Anderson said. “And if we do that, we have those audits in place before certification.”

The majority of the 11-member Senate panel asked questions about the scope of the risk-limiting audit and any challenges counties faced while conducting the review.

Sen. Cris Dush, R-Jefferson, who is now leading the Senate’s investigation into the 2020 general and 2021 primary elections asked if the 2020 election was carried out “precisely as written” within the state’s Election Code.

“Yes, I believe it was,” Marks answered. “I believe the counties conducted the election according to the Election Code. There were certainly court cases where the court interpreted the statute and that is the role. It is a separate, equal branch of government.”

In a campaign led by former President Donald Trump, who lost the 2020 election by 80,555 votes in Pennsylvania, supporters — including some Republican state lawmakers, have made unsubstantiated claims that the election was rigged.

To address these claims, state and local election officials have looked to these audits.

Degraffenreid replied: “Senator, the results are valid. They’ve been certified, and so I think, I would just ask, honestly, that elected official make that clear. Voters, the election of 2020 is done. It’s over.”