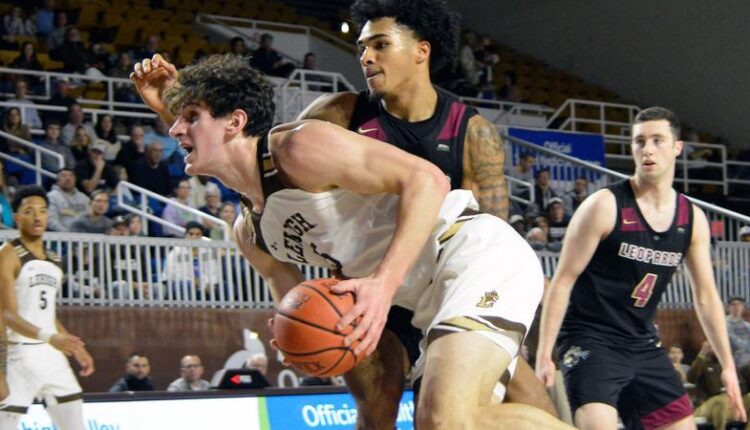 BETHLEHEM, Pa. – The Lehigh men’s basketball team won its sixth-straight Patriot League game with a 61-49 victory over Lafayette in The Rivalry presented by Lehigh Valley Orthopedic Institute on Saturday night at Stabler Arena.

The Mountain Hawks are 11-8 overall and improve their Patriot League record to 6-2 for sole possession of second place in the league standings. Lehigh snapped Lafayette’s four-game win streak to put its record at 6-15 and even its league record at 4-4. The Brown and White won their second straight game against the Leopards and won their first game inside Stabler Arena since an overtime win in January 2021.

Lafayette opened the game by scoring the first five points and went back up by five with 14:40 remaining in the half at 11-6. The Mountain Hawks went on an 8-0 run to take their first lead of the contest, 14-11, and the Leopards tied it up at 16-16 before Lehigh scored 10-straight points to lead 26-16 with 8:32 to play in the first. Lafayette got within six points on three occasions and the Mountain Hawks headed into the locker room with a 33-27 advantage.

The second half began with Lehigh pushing his lead to eight points, 37-29, but the Leopards surged back and tied the contest at 44-44 with 11:46 remaining. Senior Jakob Alamudun drained a three-pointer to put the Mountain Hawks back on top for the remainder of the game. Lafayette got within one point with 6:41 on the clock, but Lehigh continued to extend its lead to as many as 12 points, which was the final score, 61-49.

Junior Dominic Parolin led Lehigh in scoring and was one of four Mountain Hawks to reach double-figures, tying his career-high of 15 points and also grabbing three rebounds. This marks his fifth game scoring at least 10 points this season.

Sinclair reached double-digits for the second time this season with his 10 points, making two three-pointers and had a team-leading four assists, four rebounds and a steal.

Lafayette had three scorers in double-figures, led by TJ Berger, who scored 14 points, followed by 12 points from CJ Fulton and Josh Rivera rounded out the Leopards with 10 points and led the squad with four assists and two blocked shots. Kyle Jenkins had a team-high seven rebounds

Lehigh committed 15 turnovers that Lafayette turned into just two points while the Leopards were forced into eight miscues that the Mountain Hawks turned into six points. The Brown and White out-rebounded Lafayette 46-29 and dominated the Leopards in points in the paint, 32-14.

The Mountain Hawks travel to Worcester on Wednesday, Jan 25 to take on Holy Cross. Tip-off is scheduled for 7 pm and the game will be broadcast on ESPN+.