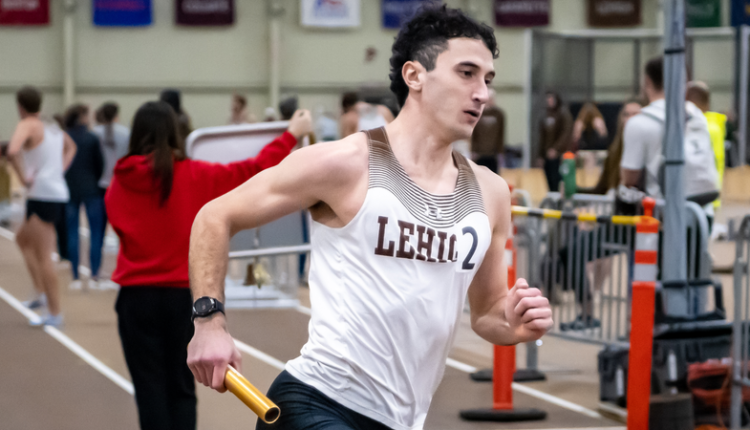 BETHLEHEM, Pa. – Kerem Ayhan claimed his second school record at the Villanova Invitational on Saturday night. The senior broke the 1000m record with a time of 2:24.41 in his sixth-place finish at the Ocean Breeze Complex in Staten Island, NY On top of Ayhan’s school record, the Lehigh men’s track and field team concluded Saturday with some solid performances at both the Villanova Invitational and Moravian Indoor Meet.

Joining Ayhan in the 1000m at the Ocean Breeze Complex were fellow seniors Connor Melko and Jacob Martinez, who both finished the race with new personal bests. Melko (2:25.28) finished seventh overall while Martinez (2:27.86) finished 13th overall.

Following his school record performance in the 1000m, Ayhan went on to capture his second top-ten performance of the night in the 4×400 relay. Seniors Douglas Cooke and Thomas Leitner and sophomore Patrez Thomas joined Ayhan in the relay, finishing seventh overall with a time of 3:24.01.

Thomas put up solid times on the track prior to the 4×400 relay, earning a new personal best in one event and tying his personal best in another. The sophomore finished 12th in the 400m with a PR of 50.64 and tied his PR of 22.95 in his 14th-place finish in the 200m. Lehigh continued to excel in the sprints as junior Daniel Stipanov finished seventh overall in the 60m hurdles with a time of 8.52.

The Mountain Hawks continued to show their strength in the field events, placing nine student-athletes in the top ten at the Villanova Invitational. Sophomore Liam Lovering continued to dominate in the throws events, finishing second in the shot put (16.19m) and ninth in the weight throw (15.89m). Fellow sophomore Alex Clevenger joined Lovering in the top ten of the shot put, finishing ninth with a mark of 14.62m.

Senior Ian Scott found himself in the top ten of both the triple and high jump at the Villanova Invitational on Saturday evening. Scott finished third in the triple jump (14.24m) and fourth in the high jump (1.95m).

While some Mountain Hawks found success in Staten Island, NY, others found success in Rauch Fieldhouse where Moravian hosted its meet. Lehigh once again continued to show its strength in the field events, having seven student-athletes claim top ten finishes.

The Mountain Hawks’ jumpers continued to shine, with three student-athletes finishing in the top five at the Moravian Indoor Meet. In the high jump, seniors Brittann Pierce (1.88m) and Vincent Polignano (1.83m) finished second and fourth, respectively. Sophomore Skyler Mott added a top five performance of his own, finishing second in the triple jump with a mark of 12.87m. Fellow sophomore Gideon Coprivnicar (6.15m) was the final jumper to earn a spot in the top ten with his sixth-place finish in the long jump.

On the track in Rauch Fieldhouse, Lehigh continued to dominate, adding nine more student-athletes in the top ten. First-years Connor Malinger (15:57.99) and Thomas Arnold (4:27.20) earned the first two top ten finishes of the day on the track, both finishing sixth in the 5000m and mile, respectively.

In the final three track events of the day, Lehigh went on to claim three more top five performances. In the 3000m, first-year Max Leffler finished fifth with a time of 8:58.10.

Senior Amondo Lemmon (23.19) continued to put up solid times on the track as he finished second overall in the 200m at the Moravian Indoor Meet. Fellow senior Jack Bush finished sixth overall with a time of 23.94.

Lehigh wrapped up the Moravian Indoor Meet with a second-place finish in the distance medley relay with Wycherley, Kim and Burd running along with senior Riley Williamson.

The Mountain Hawks will return to Bethlehem to host rival Lafayette inside Rauch Fieldhouse on Saturday, January 28 in the Rivalry presented by Lehigh Valley Orthopedic Institute.

Parents had high rates of anxiety and depression during COVID. That affected kids | Opinion