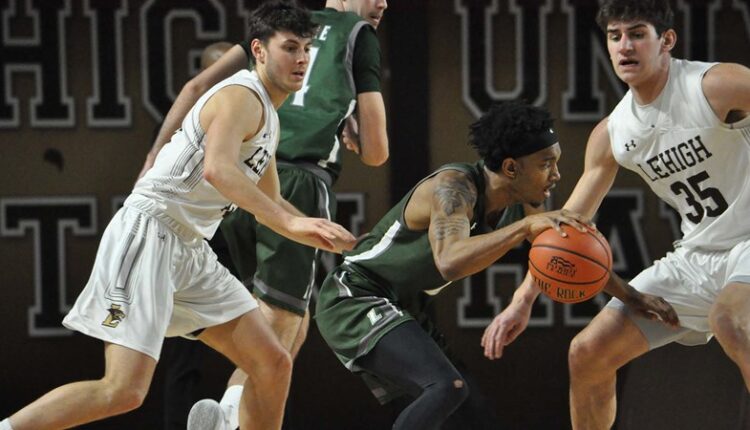 Lehigh Bounces Back in Big Way to Down Loyola, 76-72

BALTIMORE – One day after a home defeat of 28 points to Loyola, the Lehigh men’s basketball team traveled to Baltimore and won a hard-fought, brave win against the same greyhounds (76-72) in the Reitz Arena on Sunday evening. With a balanced team performance, sophomore Reed Fenton led the offensive with 19 points to reach a career high. Newcomer Dominic Parolin was a big spark off the bench, posting career highs in points (15) and rebounds (10) for his double-double in his first career. With the victory, the Mountain Hawks move back in the overall standings before Loyola and reach the eighth and final position of the Patriot League tournament before the last weekend of the regular season.

“I was really proud of our boys who were able to relax like yesterday,” said Lehigh’s head coach Brett Reed. “I think there was an emotional gut check. We came with great energy. We got a major game from Reed Fenton right after the jump but all of our boys played hard and shared the ball. Dominic Parolin came in and gave us some excellent minutes also to help us establish ourselves.

Play it, Dominic Parolin! He does everything. Up to 14 points and six boards so far and one.

“Our boys played a very good kind of basketball and I like the teamwork I saw in the first half and the tremendous energy in defense.”

In a competitive first half, the teams exchanged leadership early on. Fenton had a pair of 3-pointers before the game was four minutes old to set the tone early. A 5-0 rise from Loyola gave the Greyhounds 24-19 lead in the middle of the first half, but the Mountain Hawks had an answer.

Taylor and Parolin took over in a 9-0 run and scored five and four points, respectively. A Parolin Fastbreak Dunk gave Lehigh a 28-24 lead with 6:29 in the first half. The Mountain Hawks would hold the lead from that point on, but they encountered significant Loyola opposition. An Isaiah Hart layup put the greyhounds within 36-33, but Lehigh scored the last five points in the first half to open a 41-33 lead at halftime.

Less than a minute into the second half, a Li-3 pointer gave the Mountain Hawks a double-digit lead with 44:33 for the first time. From there, Loyola continued to claw closer, but Lehigh always seemed to have an answer.

. @ benli__ warmed up to start the second half with six early points. Lehigh 49, Loyola 38 on media timeout for children under 16 years of age.

The greyhounds came within four at 55-51 in the middle of the verse and three at 58-55 at 7:52 on the clock, but Lehigh responded with four straight points (all free throws from Fenton) and seven of the next eight as Jake Betlow 3-pointers brought the Mountain Hawks forward at nine, 65-56, at 6:31.

Lehigh had a lead of several possession in the remaining minutes, but a 3-point game by Santi Aldama pulled the greyhounds within 71-69 by 29 seconds. The Mountain Hawks held on, made enough free throws, and got enough stops in the last few seconds for a 76-72 win.

“I like the fact that our kids tried to make their mark on the game,” said Reed. “They did it with teamwork. They played together and played hard. They did it with energy. They flew all over the field, especially in the first half, and they weathered some storms whether it was the storm that they survived from yesterday, or even some. ” of the defensive pressure Loyola could put on us.

“At the end of the day we got out of here with a win and that’s very impressive. It’s a victory of character.”

Readers React: Families need help caring for those with Alzheimer’s