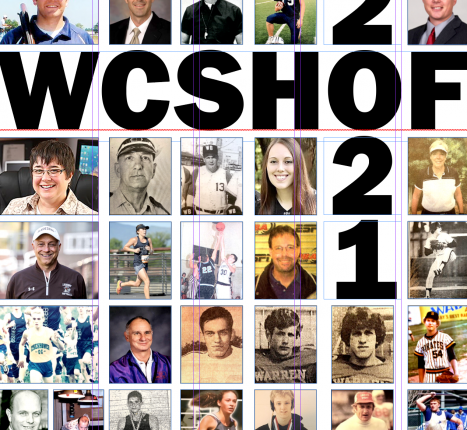 The Warren County Sports Hall of Fame is looking for something they have not done in 11 years — voting members for the upcoming WCSHOF Class of 2021.

Anybody can join — whether you love sports, are trying to help one of the nominees get into the hall, or just want to support a local organization, all it takes is a $10 membership fee and you will be able to vote on the upcoming induction class. The small fee helps fund the ceremony and the awards, as well as any other expenses such as newspaper ads or other ways of advertisement.

Back in the summer of 2020, the WCSHOF received 68 total nominees. The list was narrowed down to 22 living nominees and six deceased.

A membership into the 2021 Hall of Fame organization costs $10 (an amount that has not changed since 1993), is good for one year, and includes full voting rights. There is also a corporate business membership offered for any businesses interested in joining the WCSHOF. There will be three tiers of sponsorship: Platinum ($200, which includes a sponsorship plaque), Gold ($150), Silver ($100) and Bronze ($50). Each level of sponsorship will receive an ad in the membership booklet, as well as one membership ballot.

For anyone interested in becoming a voting member of the WCSHOF, visit the ‘Warren County Sports Hall of Fame’ Facebook page, or contact Nate Sandberg at: [email protected]

¯ Ran track and cross country at Allegheny College, was the captain of both teams, and an individual qualifier for the 1999 NCAA Cross Country Championships.

¯ 1964 Pennsylvania co-Player of the Year in football with Mike Reid (PSU recruit) and was first-team all-state that year for the running back position.

¯ 1964 high school All-American mention, Big 30 Player of the Year, and led the state of Pennsylvania in points scored.

¯ Attended Syracuse University on a full athletic scholarship and was the running back of the 1964 Sheffield Wolverines undefeated football team.

¯ Played tailback and flanker at Syracuse and was in the same starting backfield as NFL Hall of Famers Larry Csonka and Floyd Little.

¯ 1,726 career points at Penn State Behrend during his time there (school record at the time).

¯ Four-time All-AMCC selection, and two-time AMCC Player of the Year at the center position.

¯ AMCC Rookie of the Year as a freshman, and team MVP as a senior.

¯ NABC second-team All-Region in 2004 (Equivalent of All-American for Division III at the time).

¯ Scored 44 points in one high school basketball game and averaged 25 points per game her senior year of high school.

¯ Holds the course record on both golf courses at the Chautauqua Institution (2-under par at the Hill Course, and 6-under par at the Lake Course), as well as Carlisle Barracks (4-under-par 69).

¯ As a swimmer in the early years, held numerous freestyle records at the Warren YMCA (the 50-, 100- and 200-yard events and relays). In ninth grade, won district and regional swimming championships, and placed fourth at the state meet in the 200-yard freestyle.

¯ Named to the Northwest Conference first team as quarterback and was an honorable mention on the all-state team.

¯ Blue-chip prospect — recruited by and played for Penn State University as a linebacker.

¯ Voted the MVP of the 1980 Blue-White game at Penn State University.

¯ Finished high school football career with a 20-1 record as the starting quarterback for the Warren Dragons.

¯ Won the 2003 Naval Academy Athletic Association Sword which is “presented to the midshipman of the graduating class declared by the Association’s Athletic Committee to have personally excelled in athletics during his years of varsity competition.”

¯ Attended Syracuse University on a full-ride athletic scholarship for football (received offers from Vanderbilt and Iowa as well).

¯ Battled injuries but recovered, and closed out his career with the Burlington, Iowa Expos in 1987.

¯ At the team level has coached seven district team champions, one region team champion, and one state team runner-up.

¯ Lettered as a freshman at WAHS, at a time when freshmen did not typically wrestle at the varsity level; four-year letter winner in both cross country and wrestling.

¯ Signed with the Cleveland Indians organization in 1957 — the same day he threw a no-hitter for the Warren Elks.

¯ Played basketball from 1959-60 for the House of David traveling basketball team — an organization known for their long hair and beards — that traveled the country playing basketball.

¯ Played baseball for the Warren Bombers (formerly known as the Jamestown Bombers) at age 15 for two years. (Teammate of Ernie Banks).

¯ Struck out 20 of 21 batters to lead the Western Auto Team to a league championship.

¯ Umpire at the Canadian Cup in Toronto, the Pam Berry Memorial Tournament in Morgantown, West Virginia, and the Senior Olympics in Pittsburgh.

¯ Named D-III All-Conference, All-Region, and an All-American nominee for softball.

¯ Over 65 championships and more than 45 other wins at the state (PA, MD, NY, OH, ON, VA, WV) and regional trapshooting throughout the United States and Canada.

¯ Played three seasons for Tidioute in the Warren County American Legion baseball league and was named to the all-star team each season: advanced to the Western, Pennsylvania all-star team during final season.

¯ Recruited by Penn State University and played baseball for three seasons. Was a two-time letter winner.

¯ Drafted by the Pittsburgh Pirates in the 35th round of the 1979 MLB Draft.

¯ Inducted into the Tidioute Basketball Hall of Fame in 2001.

¯ Warren Area High School Javelin record holder with a throw of 197 feet, 10 inches (seventh-best throw in the nation for the year)

¯ Attended Division I Akron University on a scholarship and won the Mid-American Conference javelin championship with a throw of 221 feet, 11 inches (second-best javelin throw in Akron history).

¯ Three-time MAC champion and placed ninth in the javelin at the NCAA Mideast Regional during sophomore year.

¯ As a senior, was a first-team All-MAC honoree, and placed 18th at the NCAA preliminaries.

¯ 11 consecutive regular season Patriot League crowns from 1999-2009 and has won nine of the last 16 tournament titles.

¯ As head coach, he has produced 44 All-Region performers. He has coached four Academic All-Americans and 153 All-Patriot League selections.

¯ Represented the United States during the 2003 World Cross Country Championships in Lausanne, Switzerland, competed against strong running countries such as Kenya, Uganda and Ethiopia, and finished 45th place out of 121 runners

¯ In 2003, earned All-American status at Division I Northern Arizona University with a 43rd place finish during the 2003 NCAA Division I Championships.

¯ At Northern Arizona, helped the Lumberjacks to a 2002 NCAA Mountain Region Title, a seventh-place NCAA finish, and a 2003 Big Sky Conference title for indoor track and field.

¯ Won a state championship in cross country in 2002 as a senior at Eisenhower High School. Led the Knights to second in the state.

¯ Qualified for states in cross country all four years, including winning District 10 Class AA individual championship as a senior, and the AAA title in the 3,200-meter run for Warren as a sophomore.

¯ Also, as a senior, qualified to run in the Mid-East Conference National high school XC race (a race between PA, OH, MI, IN, IL’s finest) and placed 13th.

¯ Was a Division II All American cross country runner at Edinboro University, and earned 10 varsity letters in four years in basketball, cross country and track for Eisenhower, and one year for Warren.

¯ Continues to run distance races from 5k to marathon at 36 years of age, most recently winning the Nyla Luvison 5k in Sugar Grove in July.

¯ Featured as the tournament leader in the national televised ABC-TV finals of the Greater Detroit Open in 1996 losing the title to Doug Kent.

¯ Has rolled 14 perfect games on the PBA Tour.

¯ Nicknamed “The Multi-Man” due to his ability to play multiple positions on the football field.

¯ During his senior year of football, he rushed for 1,645 yards, averaging over 7 yards per carry, and scored 12 touchdowns on the 10-1 team.

¯ Qualified for the state track and field championships in the 120-yard high-hurdles and the 330-yard intermediate high hurdles in 1978.

¯ Played running back, slotback, wide receiver, defensive back and even punt returner.

¯ Named to the Northwest Conference first team as a running back, received honorable mention on the all-state team, and received a Pennsylvania Big 33 nomination as well.

¯ Coached the Youngsville team that ended Ridgeway’s 34-game winning streak, which was the longest winning streak in the state at the time

¯ Possessed great love and enthusiasm for Youngsville and all sports, as well as a positive motivator.

¯ Coached Youngsville varsity baseball for four years and led the team to its first only playoff win in school history.

¯ Coached Sheffield’s first undefeated/untied season in 1960 (8-0), and another one in 1964 and was the Allegheny Mountain League Big 30 Coach of the Year for both years.

¯ Most wins in a nine-year span in Sheffield Area High School history, as well as the best winning record in school history (44-20-1).

¯ In 2011, became 17th internationally in 8-ball at Las Vegas out of 1579 total entrants- while In Vegas, shot exhibitions against the famous Jeanette Lee and Allison Fisher.

¯ Participated in many national events including playing in Las Vegas and other large venues and has pocketed 387 balls in a freelance run and 106 balls in a straight pool run.

¯ Founder of the Kinzua Classic pool tournament which brought in over 300 pool players from the tri-state area held at the Holiday Inn.

¯ 28-year police officer in the borough of Warren, but served his community in many other ways, including starting the Warren Hot Stove League in 1949, and later transitioning to Little League.

¯ Remembered as a ball player and founder of youth baseball in Warren County with Musante Field dedicated in his honor currently at Betts Park.

¯ Served as the local Hot Stove League president for many years after its founding, with an organization that built 13 brand new ball fields to help field the inaugural 29 teams.