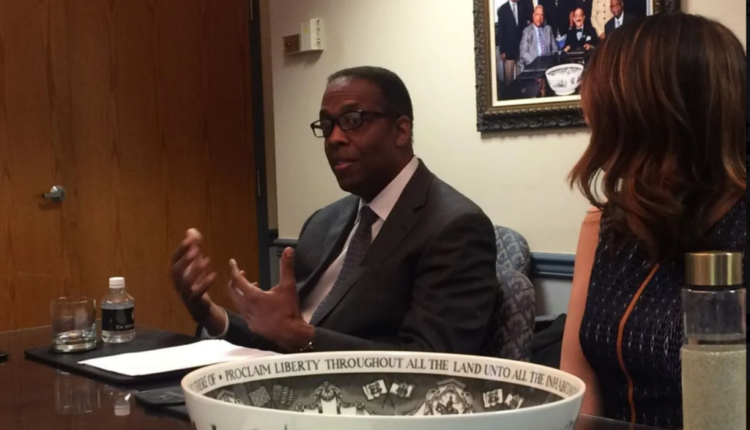 This spring Jones is opening the Fourth District Container Village. This will be fa flea market utilizing recycled and refurbished shipping containers will open in West Philadelphia in the Parkside neighborhood, allowing vendors to sell merchandise.

Councilmember at-Large Isaiah Thomas is looking forward to fulfilling his promise to prioritize youth in 2022.

“The priority that I campaigned on, and will always be my top priority, is quality of life of Philadelphia’s youth,” Thomas said in a statement. “From our schools to out-of-school time and overall wellness — we need to raise the bar for our youth people constantly.”

Thomas said he wants to continue the work on the bills that he had passed in 2021. For example, his Keep It Local Bill (procurement reform) encouraged driving the local economy by using and advocating for local business use. And his Driving Equality (police-community relations improvement) legislation which was signed to limit what is considered a primary reason to stop a vehicle and what should be regarded as secondary, was landmark legislation and the first of its kind.

“I also look forward to working to make Philadelphia a more business-friendly city for every neighborhood; this will be our best way to attract new residents and tourists,” Thomas said.

Councilmember at-Large Allan Domb said in 2022, leaders must be dedicated to stopping violence in Philadelphia.

“We must remain committed to solving the violence epidemic — there’s nothing more important than reducing and preventing gun violence across our city,” Domb said in a statement.

He said that city officials need to think outside the box and utilize every tool available.

“This includes utilizing our academic experts to help us evaluate our efforts, deploying tech surveillance and being smarter than those causing issues, and examining innovative DNA analyses to help solve crimes and assist prosecutors,” Domb said.

He is also pursuing legislation that reduces Philadelphia’s tax burden to help the job market.

“Additionally, we must continue our work to bring quality services to all Philadelphians, including much-needed support for creating 21st-century schools that will help our city compete for residents regionally, exploring innovative waste collection systems, and expanding outdoor dining options. That is equal and fair for everyone,” Domb said.

“Our $400 million Neighborhood Preservation Initiative is underway, and it will provide more affordable housing, support for first-time homebuyers, job opportunities, neighborhood revitalization, and eviction protections — the largest single city investment in neighborhoods in Philadelphia history,” Clarke said. “And we need everyone on the same page — the mayor, Philadelphia police, the District Attorney, the courts and City Council — working together to reduce gun violence and make our city safer for everyone.”

Councilmember Mark Squilla, D-1st District, said he wants to concentrate on crime and illegal drug use in 2022.

In 2021, drug overdoses in Philadelphia rose 10%. Squilla said he intends to pursue innovative programs to help those suffering from homelessness and drug addiction. He is a big proponent of reinstating drug courts and community courts and has worked with all stakeholders trying to do so.

Councilmember at-Large Derek Green said that he is concentrating on making sure 2022 is not a repeat of 2021. Green stated that all public agencies need to be on the same page this year for a substantial decrease in gun violence.

Beyond addressing gun violence overall, Green said he would continue to hold hearings on the connection between poverty and gun violence.

Additionally, Green said he hopes to move past COVID-19 and return to in-person meetings.

“Well, what I’m looking forward to the most in addition to having a safer city, a city where we can hopefully come together beyond the two dimensions of Zoom and Skype and WebEx, but be much more in person,” Green said. “Hopefully, as we go through the first quarter of next year, you know more about the omicron variant will have some waning effects. And hopefully, we don’t have a new variant in 2022 that causes challenges and that we add more and more people getting vaccinated so we can try to get back to the life that we had pre-pandemic.”

Councilmember Jamie Gauthier, D-3rd District, had some legislation passed to help Philadelphians with access to affordable housing in her area of jurisdiction in West Philadelphia in 2021.

She said that her goals and points of emphasis in the new year are to ensure that the city is successfully prepared for that legislation to start within six months.

“First and foremost, my office will be using the next six months to ensure that the city is prepared for successful implementation of the Mixed-Income Neighborhoods Overlay and that it can be implemented with integrity,” Gauthier said.

She said that she is looking forward to a hearing about expiring affordable housing contracts throughout the citiy’s housing developments.

“We hope that the hearing will result in some tangible next steps in terms of interventions that can be taken at all levels of government to address this urgent concern,” Gauthier said. “Additionally, we will work to get our community land trust legislation — which would give grassroots community groups a leg-up in the competition to acquire city-owned land for community-serving purposes, such as affordable housing or community gardens — across the finish line.”

Gauthier will also focus on the Neighborhood Preservation Initiative, a $400 million investment by Council that will support affordable housing, prevent evictions, and more.

City Councilmember Kenyatta Johnson, D-2nd District as chairman of the Special Committee on Gun Violence Prevention, said he is looking to develop the Office for Victim Advocates.

In December, Johnson’s legislation to hold a hearing to look at the connection between domestic violence and gun violence was approved. Domestic violence-motivated shootings increased in 2021.

Towards the end of the year, a report from the U.S. Surgeon General released an advisory about trauma and mental health issues among youth. Johnson said he wants to hold hearings examining the trauma of young people and the link to violence.

“I don’t believe that a young person is born with the mentality to shoot and murder another individual. So we want to take a deeper dive and look at the behavioral and mental health issues that impact young people and and and how it correlates to the significant gun violence that we see here in the city of Philadelphia,” Johnson said.

On top of that, Johnson will be hosting hearings to address diversity regarding government contracts in Philadelphia.

“Currently, less than 20% of city contracts were awarded to minority firms, but separate from minority firms, particularly African Americans receive less than nine percent of those contracts,” Johnson said. “And so we want to make sure that we’re supporting Black and brown businesses here in Philadelphia, making sure that they have a seat at the table when it comes to the contracts that are being doled out.”

Brian Saunders is a reporter for the Philadelphia Tribune, where this story first appeared.