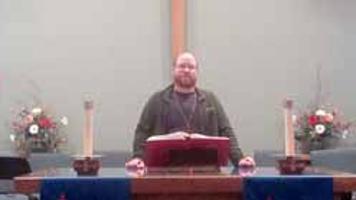 From Bethlehem to Bethesda | to trust

“[The congregation] loves the idea that my name is “Muskie,” joked Pastor James Muske. “… I expect a lot of fish stuff over time. I’ve already been invited to muskie fishing. “

Muske previously preached in Bethlehem, Pennsylvania and is the new pastor of Bethesda Lutheran Church in Malmo. His career to date has taken him across the Midwest, including a seminar in the Twin Cities and an internship at the Pine Ridge Indian Reservation in South Dakota. He brings humor to his new position, but also wants to get to know the local community and emphasizes the importance of change.

Way to the cloth

Muske is no stranger to the Midwest having raised in Spencer, Iowa. As a student he attended Cornell University. Initially, he expected to get into astronomy, engineering, or science and would eventually graduate with a degree in history.

After college, he considered a number of options including an international degree and a law degree. “There was a law school with a dual law degree and Masters of Divinity,” Muske explained. “… I thought about ‘I really want to be a lawyer’ and the pastor thing got more and more interesting.”

He worked with Lutheran Summer Music in the Twin Cities for a while before attending the Luther Seminary in St. Paul.

As part of his seminar, Muske completed an internship at the Pine Ridge Retreat Center on the South Dakota reservation of the same name. Although the community faced poverty and unemployment, Muske also experienced a lot of culture while on the reservation. “There are a lot of stereotypes about locals,” he said, “but I met some great people while I was out there.”

Church groups came to the retreat center and there were always local artists present. Muske quoted a woman who made cross ornaments from porcupine quills and a drum maker who also spoke about the history of the Wounded Knee massacre.

“We didn’t want to just go there, do a project and go home without really understanding people,” said Muske.

Muske hopes to visit the Pine Ridge community again one day. He also has a desire to learn more about the Mille Lacs Indian community.

“There’s a lot of complicated history,” he said, “but this is her home. It is good for us to understand the people who call this area home and to build relationships with them. “

Muske’s first calling after seminary was to St. Matthew’s Lutheran Church in Bethlehem, Pennsylvania, where he served for five years. After his ordination, Muske filled out paperwork and stated that he was interested in “going somewhere”. He laughed: “So Bethlehem was ‘everywhere’.”

Muske had learned a lot about Bethlehem’s history as the “old steel city”. Muske was impressed with how the community managed to survive after the community’s steel industry collapsed. He felt this had affected the community’s nervousness about change, but also praised their willingness to try new things.

The Bethesda Lutheran Church is Muske’s second calling after the seminary. After five years in Pennsylvania, he began looking for a community in the Midwest that was closer to his family. In his search in Iowa and the surrounding states, he found that the Synodal Offices in northeast Minnesota were incredibly accessible.

“Elsewhere, you had to argue body and soul to get information about what was going on in the churches,” he said. “The offices in the northeast were some of the friendliest.”

Being from the Midwest, the cold weather hadn’t been too much of a shock to Muske, although he was used to a more urban environment. In particular, he said he would miss the ethnic restaurants. However, he looks forward to hiking on site and suspects that his family would visit the rectory to see the lake.

The role of a pastor

Muske addressed the dynamic role pastors often play in their churches. While they are there for the good times, get invitations to go fishing and the like, they have to be there for the hard times too – family struggles, illness, death, grief.

“Not that you’re the one to solve these problems,” he said, “but you walk next to people everywhere.”

Muske added that he has started socializing and having good relationships with other local pastors.

One thing Muske wants to implement in the church is more online content such as podcasts or vodcasts (i.e. online audio or video streaming). Since the local community has a number of snowbirds, he thought such material could keep the community connected throughout the winter.

He explained that young and old people treat the Church differently these days. He noted that smartphones were a fairly common commodity throughout the congregation.

“You have to be creative, keep people connected,” he said. From what he’s seen of Bethesda so far, he believes they have a “free and open mind” to change.

Above all, Muske felt that getting to know the community was important and would definitely like to do so. He added that there was no point in bringing new ideas if they didn’t fit into the community.

“So far, I have been blessed with the warm welcome I have received,” he concluded.