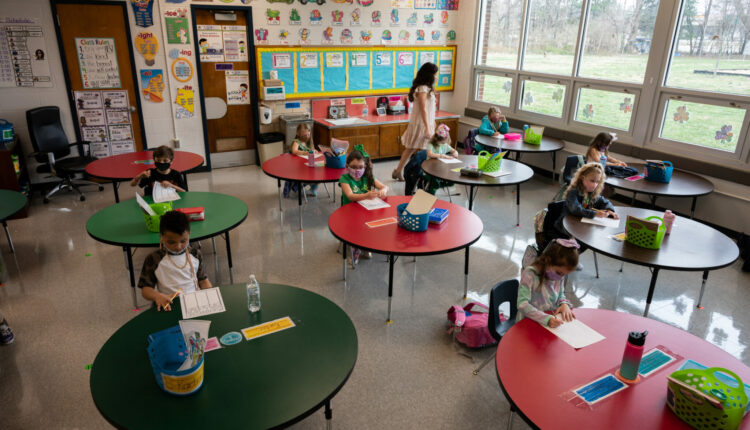 With states around the country in the grip of the Delta variant, a majority of Americans say they support the vaccine mandates that President Joe Biden announced last week, according to a new Monmouth University poll.

A majority similarly supports guidelines for masking and social distancing in their home states, as well requiring people to show proof of vaccination to do such things as board an airplane or go to work, the poll found.

The poll’s release comes as COVID-19 cases continue an unsettling upward climb in Pennsylvania that’s seen an increase in hospitalizations and fatalities.

It also comes as the Republican-controlled General Assembly and Democratic Wolf administration have engaged in pitched battles over a mask mandate for K-12 students and staff, and children and staff in child care centers that took effect on Sept. 7.

Earlier this week, a Republican-controlled House panel voted to ask an obscure regulatory body for a ruling on the order signed by acting Health Secretary Alison Beam. On the other side of the Capitol, Senate President Pro Tempore Jake Corman, R-Centre, is leading a lawsuit challenging the mandate.

More than two-thirds of respondents (66 percent) said they supported requiring students, teachers, and staff to wear face masks. That included majorities of blue state (68 percent) and red state (63 percent) residents, according to the poll.

“The current poll shows majorities of residents in both red states and blue states support some type of COVID control measures, and that includes many of the mandates proposed by the president last week,” Monmouth University Polling Institute Director Patrick Murray said in a statement.

Sixty-three percent of respondents said they supported mandatory vaccinations for health care workers; 58 percent favored mandatory vaccines for federal employees, as well as for private contractors who work for the federal government (55 percent).

The Monmouth University poll was conducted nationwide from Sept. 9 to to Sept. 13. The poll includes the opinions of 802 adults, with a margin of error of 3.5 percent.

Right on schedule, a Republican-controlled Senate panel approved subpoenas for a broad swath of records — including the last four digits of voters’ social security numbers — as it launches a partisan probe of the 2020 election. Stephen Caruso has the details.

State officials, including Department of Human Services Secretary Meg Snead and Pennsylvania First Lady Frances Wolf gathered at the Capitol Wednesday to recognize Hunger Action Month, those struggling with food insecurity, and to offer their support to the commonwealth’s food banks. Cassie Miller has what you need to know.

New research shows that half of LGBTQ workers nationwide have faced job discrimination, our partners at the Philadelphia Gay News report.

On our Commentary Page this morning, opinion regular Bruce Ledewitz wonders whether state Supreme Court Justice David Wecht heralded the death of God in a recent opinion. And this Pa. activist group is putting people first. Opinion regular Frank Pizzoli explains how you can help.

Nearly all the COVID-19 hospitalizations and deaths in Philadelphia were among the unvaccinated, city officials said Wednesday. The Inquirer has the story.

Federal officials seized two shipments of fake vax cards in Pittsburgh, the Tribune-Review reports. The price of the vaccine? Free. This kind of stupidity? Priceless.

A Pennsylvania State Police trooper was arrested by his fellow troopers on Wednesday and charged with forgery and records tampering, PennLive reports.

Bethlehem’s efforts to become a world heritage site have moved one step closer to reality, the Morning Call reports.

WPSU-FM takes a look at how Pennsylvania school districts are enforcing the Wolf administration’s mask mandate.

What Goes On (Nakedly Political Edition)
The Senate Republican Campaign Committee holds an 11:30 a.m. golf outing at Laurel Valley Golf Club in Ligonier, Pa. Admission runs from a mildly offensive $2,500 all the way up to an utterly obscene $20,000.

You Say It’s Your Birthday Dept.
Best wishes go out this morning to Antoinette Kraus at the Pennsylvania Health Access Network; John Neurohr at Shelly, Lyons Communications, and reader and friend, Gail Bumsted, all of whom celebrate today. Congratulations and enjoy your day, folks.

Heavy Rotation
We all could do with some better days. So here’s ‘Better Days,’ from singer/songwriter Dermot Kennedy.

Thursday’s Gratuitous Soccer Link
This one is absolutely for the trainspotters among you. From Four Four Two, it’s the list of 20 highest-ever Champions League scorers that you didn’t know you needed.