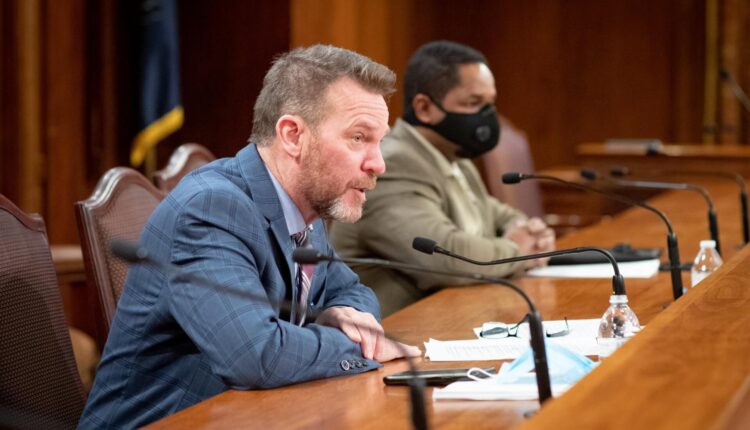 The first Republican in the GOP-controlled state Senate to speak out against the proposed “forensic investigation” into Pennsylvania’s two most recent elections has a message to colleagues on both sides of the aisle: “We have real work to do in the Capitol.”

In an op-Ed sent to news organizations around the state, Sen. Daniel Laughlin, R-Erie, who’s exploring a run for governor, denounced attempts to review the 2020 general and 2021 elections, making him the first and so far the only member of his party to voice opposition.

“For the first time in 60 years, Pennsylvanians elected Republicans to the post of state treasurer and auditor general and came within reach of ousting a Democratic attorney general,” Laughlin wrote. “That’s not a sign of a stolen election.”

Former President Donald Trump lost the 2020 election by 80,555 votes in Pennsylvania. And despite a months-long campaign from Republicans and Trump allies to discredit the results, there’s been no evidence to prove their claims.

As required by law, all 67 Pennsylvania counties conducted post-election audits of a statistical sampling after the 2020 general election. Sixty-three counties conducted “risk-limiting” audits. Neither review found evidence of voter fraud or election misconduct.

Voters opted to maintain the Republican majority in the House and Senate; those victories reflect better messaging, Laughlin said.

“What message will people take from someone trying to pry open voting machines and rummage through already counted ballots while employing statistical tricks to argue that the 2020 election was a fraud?” he asked.

Laughlin has served in the Legislature since 2016. Winning reelection in 2020, he was not one of the 21 Republican state senators who signed a letter asking Congress to delay the certification of Pennsylvania’s electoral votes. He does not sit on the Senate Intergovernmental Operations Committee, the panel that’s spearheading the proposed investigation but serves on the Senate State Government Committee, which traditionally oversees election matters.

Laughlin didn’t mention Sen. Doug Mastriano, R-Franklin, another potential gubernatorial candidate, by name. However, he discredited the GOP-backed election investigation in Arizona, which has served as a model for what Mastriano is pursuing in Pennsylvania.

“In Arizona, an outside vendor with a preconceived position was asked to ‘audit’ the ballots and equipment,” Laughlin wrote. “The only credible result has been an undermined public trust in democracy and a cost of millions of dollars to taxpayers who must now replace voting machines that were decertified because a third-party had tinkered with them.”

Gov. Tom Wolf, Attorney General Josh Shapiro, and their Democratic colleagues in the upper chamber have ridiculed the proposed investigation, vowing the challenge it at every opportunity. In response to a letter Mastriano sent to Tioga, York, and Philadelphia counties to ask for election equipment and voting information, the Department of State issued a directive that prohibits third-party access for reviews.

The back-and-forth and indirect dialogue between parties have distracted lawmakers from governing, Laughlin said, adding that the Legislature should focus on economic recovery, roadway improvements, school fundings, and establishing a living wage.

“If two sides want to fight over a year-old election, I advise them to take it outside,” he said.

Starting this year school year, all Philly public schools to have gender-neutral bathrooms