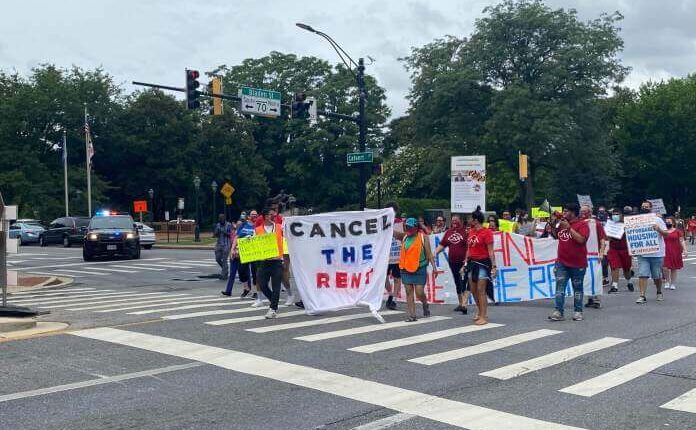 WASHINGTON — Ten states that struggled to pay the mounting costs of rising unemployment compensation claims during the COVID-19 pandemic will face yet another challenge starting this week: interest accruing on federal loans they relied on to cover payments to the unemployed.

Collectively, those states — which include Colorado, Minnesota, New Jersey and Pennsylvania — owe the federal government more than $52 billion, according to data from the U.S. Treasury.

So far, the loans to state unemployment compensation trust funds have been interest-free, but starting on Sept. 6, a 2.3% interest rate will kick in on the remaining sums.

“By repaying this loan in full, we ensure that Ohio businesses won’t see increases in their federal unemployment payroll taxes,” Ohio Gov. Mike DeWine said in a news release Wednesday announcing a payment to the U.S. Treasury of nearly $1.5 billion. “Without this added tax burden, our employers can invest more money into their businesses and hire more staff.”

Both Ohio and Nevada tapped federal dollars from the American Rescue Plan to pay off their loans, which are known as Title XII advances.

“Paying off the loan puts Nevada in a good position,” said Heidi Saucedo, a spokeswoman with Nevada’s Employment Security Division. “We can begin to build up our trust fund to prepare for the future while keeping rates manageable for employers.”

The interest payments on those federal loans are kicking in at the same time that the additional unemployment benefits paid for by the federal government also are coming to an end in many states.

Those benefits included a $300 weekly supplement on top of benefits paid by states, as well as additional weeks of payments for the long-term unemployed and a program to aid gig workers who typically have not qualified for unemployment benefits. Some Republican-controlled states ended those additional payments earlier than the September deadline.

But while the federal government had supplemented traditional unemployment support, the scale of the pandemic-driven unemployment rolls strained some states where the unemployment trust funds could not keep up with the sudden demand from laid-off residents.

During 2020, 22 states borrowed from the federal government to keep those unemployment checks flowing, according to the U.S. Department of Labor.

That included some states like Minnesota, which had to borrow even though its trust fund was in a strong position prior to last year’s economic crisis.

Before the pandemic, Minnesota’s trust fund had 94% of the estimated amount needed to cover a year of benefits, according to reporting from the Minnesota Reformer. But those reserves were burned through in the first six months of the pandemic, according to the Federal Reserve Bank of Minneapolis.

Minnesota has not tapped its federal stimulus funds to help pay off a $1.1 billion federal loan. Instead, payroll taxes are set to rise dramatically next year.

Asked about the state’s plans for paying off that loan, a spokeswoman with Minnesota’s Department of Employment and Economic Development said doing so may take several years, and said Congress “should do more to reduce the burden on employers” to refill those trust funds.

“At a bare minimum, the interest waiver should continue,” DEED spokeswoman Jen Gates said. “Beyond that, Congress should seriously consider forgiving all or most of the amount borrowed; especially for states like Minnesota, whose trust funds were solvent prior to the start of the pandemic.”

The U.S. Chamber of Commerce and the National Association of State Workforce Agencies have made similar requests to Congress to waive interest payments on the federal loans. But lawmakers on Capitol Hill did not take action ahead of Monday’s expiration of that interest-free period.

But unlike after the Great Recession, when a number of states also had to borrow to cover unemployment payments, the stimulus dollars passed this year may help many states to dig back out of that financial hole.

Pandemic unemployment benefits are ending. Here’s how to get help in Pa. | Tuesday Morning Coffee

New Mexico, which had owed $206 million at the beginning of 2021, tapped federal recovery dollars earlier this summer to not only pay back its federal loan but also to fully restore its unemployment compensation trust fund back to the $460 million available prior to the pandemic.

Federal officials have explicitly encouraged states to use federal stimulus dollars for both uses, creating a potential “do-over” for their unemployment compensation reserves.

“The federal government is providing states a mulligan that they’ve never had before,” said Jared Walczak of the Tax Foundation, a D.C.-based conservative-leaning nonprofit focused on tax policy.

He added that for states refilling their UC trust funds with the federal stimulus dollars, “it will be almost as if, for purposes of the trust fund, that the pandemic never happened, that the benefits never went out.”

Slavery was a labor distortion. Empowering workers today is a form of reparations | Opinion