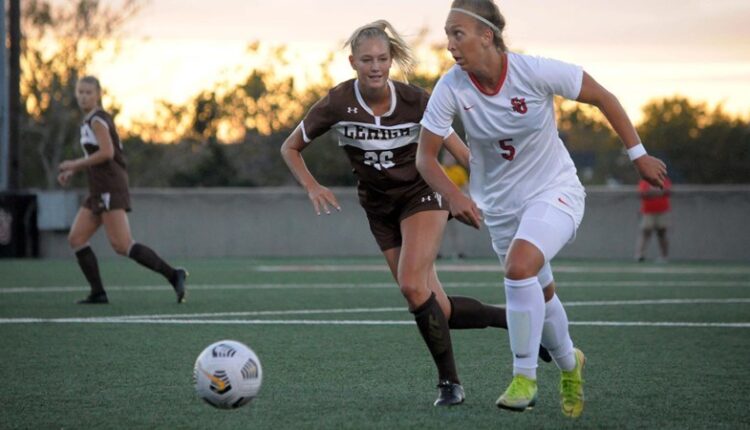 St. John’s Pulls Away in Win Over Mountain Hawks

QUEENS, NY – The Lehigh women’s soccer team held the nation’s top scorer who entered the day without a shot, but four Red Storm players scored their first goals of the season to beat the Mountain Hawks 4-0 on Thursday night. Lehigh recorded the first two shots of the game and four of the first seven, but St. John’s opened the goal in the 37th minute and refused to look back.

“There have been a lot of really good moments,” said Lehigh head coach Eric Lambinus. “We controlled the pace of the game, especially in the first half. We gave up four goals, but the goals are just mistakes. They are individual mistakes. They are man-marked. Those are things that we can absolutely fix.”

“With a young team playing against a really experienced team, they took advantage of some of our mistakes.”

Lehigh quickly opened the game with third and fourth minute shots from newcomer Hope Flanegin and Senior Courtney Supp, respectively. The Mountain Hawks held up well for most of the first half, leading to their best scoring opportunities in the 35th minute. After a corner kick, a header from Junior Julianna Bonner looked like a ticket to the far post at close range, but was saved. The follow-up chance of classmate Ryelle Shuey a few seconds later was also stopped.

St. John’s took advantage of the momentum of his defensive stance and turned it into the first goal of the game just 2:16 later. It ended with Michelle Money Lehigh’s second goalkeeper defeating Violette Bonvallet just at the far post.

The Red Storm started the second half with five shots in a row, including a goal on his first chance in the 51st minute.

It was 2-0 until the 86th minute when Shuey fired a corner kick that was blocked by St. John’s goalkeeper Naya Lipkens. Less than a minute later, the Red Storm converted a rebound to 3-0 in the 87th minute and then added a fourth in the 90th minute.

The final shots were 13-5 in St. John’s favor, while the Mountain Hawks held a 3-2 lead on corner kicks. Bonvallet finished with two saves against Lipkens, who made three.

Preseason Big East Offensive Player of the Year Zsani Kajan, who led the nation by seven goals in three goals (behind three multi-goal games), was only saved on three shots, none on goal.

“Are we upset that we were beaten by a pretty high result? Yes, but there have been a lot of really good things again, especially in the first half,” said Lambinus. “An away game, we came out and we controlled it. We only scored one goal at the end of half that may have discouraged us and they came out with a lot more energy.”

“They’re small mistakes. So it’s about having those mistakes and focusing on what we do in training to fix them on a regular basis. This is how young teams mature.”

The Mountain Hawks will be back in action next Thursday when they host Wagner at 6 p.m. on ESPN +.