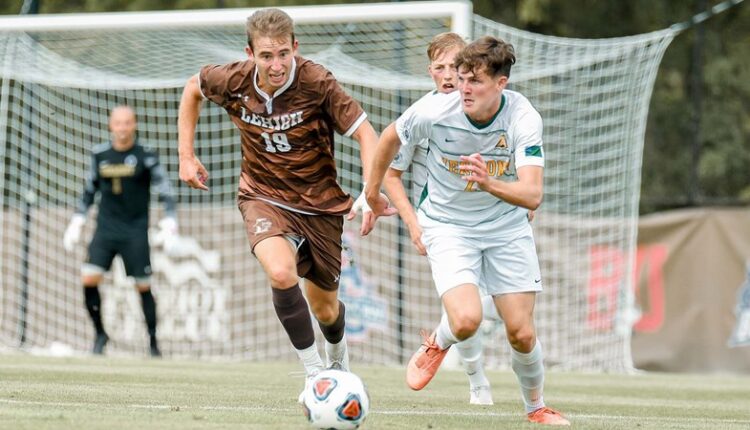 NEW BRUNSWICK, NJ – The Lehigh men’s soccer team turned a 1-0 halftime deficit into a 2-1 lead, but Rutgers responded with the final two goals of the game, beating the Mountain Hawks 3-2 on Friday night. Senior Josh Luchini scored his first goal of the season in the defeat, while fifth grader Stevo Bednarsky’s middle pass resulted in an own goal later at halftime. Blake Koski finished with seven saves.

“I think it’s a similar story to some of our games where we just couldn’t start with the intensity of bringing our forefoot forward,” said head coach Dean Koski. “It could be how we set them up and how we play. We haven’t found a style that suits our needs.

“The bottom line is that you give up three goals in a football game, it’s really hard to win,” continued Koski. “I’m really proud of the way we fought our way back after coming back one goal but we just can’t get stuck and lock it up in the back. We have to find out. I’m sure it is the same for the players frustrating as for us. “

After Trevor Koski fired the first shot of the game in the 11th minute, Rutgers reeled off the next five, three of which were saved by Blake Koski, including a penalty. Luchini had a golden opportunity in the 37th minute, but it only hit the post.

Less than three minutes later, the Scarlet Knights opened the scoring. Pablo Avila shot a shot from several meters outside the box that was perfectly placed in the right side of the gate past Koski.

Rutgers held their 1-0 lead until the 49th minute when Junior Euan Forrest headed a free kick from Senior Michael Tahiru to Trevor Koski, who headed it to Luchini, who headed him with a ball into the net.

“We’ve talked about where we want to serve the ball in the penalty area and try to be more dangerous when we have an opportunity like this,” said Dean Koski. “I thought they did it the way we’d hoped. We had guys in the right position who were winning headers and Josh was on target. This is a moment we want to enjoy and celebrate, but we just have to keep playing and we can’t let our guard down defensively. I have to find out. “

The 1-1 lasted until the 64th minute when Bednarsky looked for Junior Dominic Flowers from the end line, but a Rutgers defender distracted him into the net to give Lehigh a 2-1 lead.

Not long after that in the 69th minute, Ritchie Berry of the Scarlet Knights hit a long flank with one foot, past Koski to a 2-2 deadlock. In the 81st minute, Rutgers took the final lead when Vincent Borden headed a cross that was just out of reach of Blake Koski.

Lehigh had just one shot at Trevor Koski’s foot the rest of the way, but he sailed far.

The final shots were 22-7 in favor of Rutgers, while the Scarlet Knights had a 9-2 edge on corner kicks.

Lehigh is now looking forward to a matchup on Tuesday at FDU (7 p.m.), his last vote before the Patriot League game next Saturday against Loyola.

“We won’t overlook the FDU because it’s an important game outside of the league,” said Dean Koski. “You have a good year and a good start. We certainly planned a tough start to the season, but we want these challenges.

“We are a bit unsure where we are now and how we want to play,” continued Koski. “It’s frustrating in some ways and exciting in another because we’re not limited to one player, one position, one system. We may just have to be a team figuring out how to work out games a good place. We will find our way out. I don’t want us to focus on anything other than the next game. Our goal is to make sure we look to the next game and try to improve. “