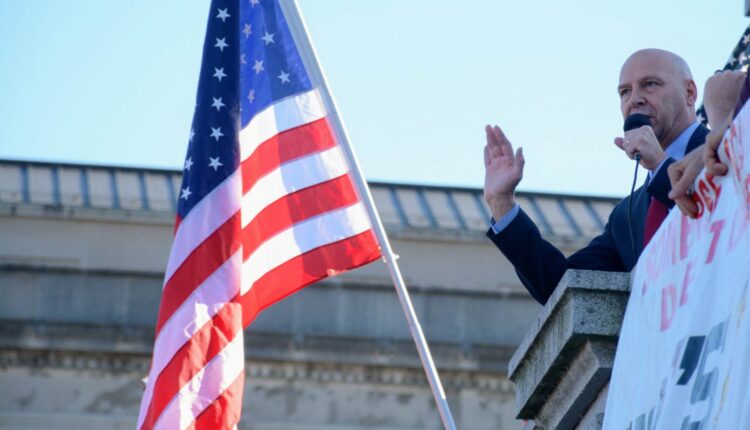 Even though he’s still waiting on Philadelphia County to respond to a sweeping request for equipment used in the 2020 and 2021 primary elections, the Republican state lawmaker who’s backing a “forensic investigation” of the results said it’s not a question of if his Senate committee will subpoena information — but when.

“It really doesn’t matter. The subpoenas are going to have to go forth,” Sen. Doug Mastriano, R-Franklin, told Chambersburg-based News Talk radio host Pat Ryan on Wednesday. “Even Republican counties rightly want to have a subpoena for legal protection.”

The subpoenas, which are likely to be challenged in court, give added protection to counties, Mastriano said — referencing a July 8 directive from the Department of State prohibiting third-party access to election systems.

So far, York and Tioga counties, historically Republican areas, have declined to comply with Mastriano’s investigation ahead of the July 31 deadline, citing the costly consequence of having to replace election equipment if they submit to the review. Philadelphia Commissioner Al Schmidt, a Republican, told the Capital-Star that the county is still reviewing the request.

Mastriano, who chairs the Senate Intergovernmental Operations Committee, a seldom-used committee that typically does not oversee election issues, said the 10-member panel could meet as soon as next week to vote on issuing subpoenas.

“As long as I get six votes out of the 10 members, then I have the power,” Mastriano told Ryan. “I am authorized to issue subpoenas. This is a legislative action. I can’t do it alone.”

He added: “I feel great about it. It’s just finding a date on the calendar that works. That’s all.”

Mastriano has not responded to repeated requests for comment.

Senate Democrats oppose the proposed investigation, saying that Mastriano — who has repeated baseless claims of a fraudulent 2020 election — is only furthering attempts to cast doubt on election integrity.

Another GOP lawmaker, Sen. Judy Ward, R-Blair, has said that attempts to “intimidate” counties into not complying with third-party reviews prevent them from demonstrating that elections are “fair and accurate.”

Sen. Scott Hutchinson, R-Venango, who also sits on the committee, has not responded to requests for comment about the investigation. A spokesperson for Senate President Pro Tempore Jake Corman, R-Centre, declined to comment on Wednesday.

Corman, however, has criticized the Department of State for decertifying Fulton County’s voting machines after it complied with a Mastriano-backed election review earlier this year.

“These examinations, sometimes referred to as ‘audits,’ are governed, in the first instance, by state law,” the department wrote. “In some circumstances, the proposed examinations may comply with state law; in others, they will not. But regardless of the relevant state law, federal law imposes additional constraints with which every jurisdiction must comply.”

As required by law, Pennsylvania counties conducted post-election audits of a sampling of ballots. Sixty-three out of 67 counties conducted “risk-limiting” audits. And even after a months-long campaign led by former President Donald Trump, there has been no evidence of widespread voter fraud or election misconduct.