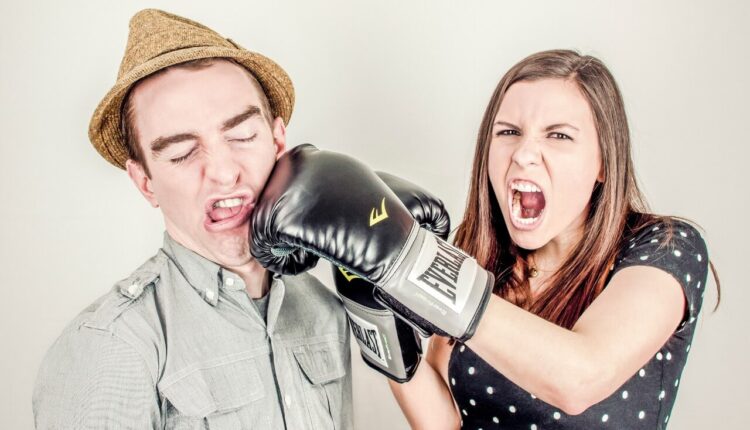 One nation under who? Inside the trust gap that’s splitting the nation | Friday Morning Coffee

About halfway through the 1989 reimagining of “Batman” that saw Pittsburgh’s own Michael Keaton don the cape and cowl, there’s a scene that finds Jack Nicholson, playing the Dark Knight’s eternal enemy, The Joker, ask a room (not entirely rhetorically): “Who do you trust?”

Some new Gallup polling out this week points the way toward an answer: Trust in big institutions has plummeted, and there are vast, partisan gaps in those institutions that Americans say they do trust.

The bottom line: Barely a third of Americans (33 percent) expressed trust in 14 major institutions, such as the U.S. Supreme Court and the criminal justice system, down from 36 percent in 2020, according to Gallup.

Sadly and unsurprisingly, after a year of pandemic-inspired lockdowns, trust in public schools and the nation’s medical system also are down after notching double-digit increases in 2020. And Americans say they have the most confidence in the military and small business, and the least in Congress.

“Last year’s confidence reading for the police, which was taken in the aftermath of George Floyd’s killing and the related nationwide protests, was the lowest on record and the first time it was below majority level,” Gallup’s pollsters noted. “While the latest three-point uptick is not statistically significant, the measure remains shy of its 2019 level.” 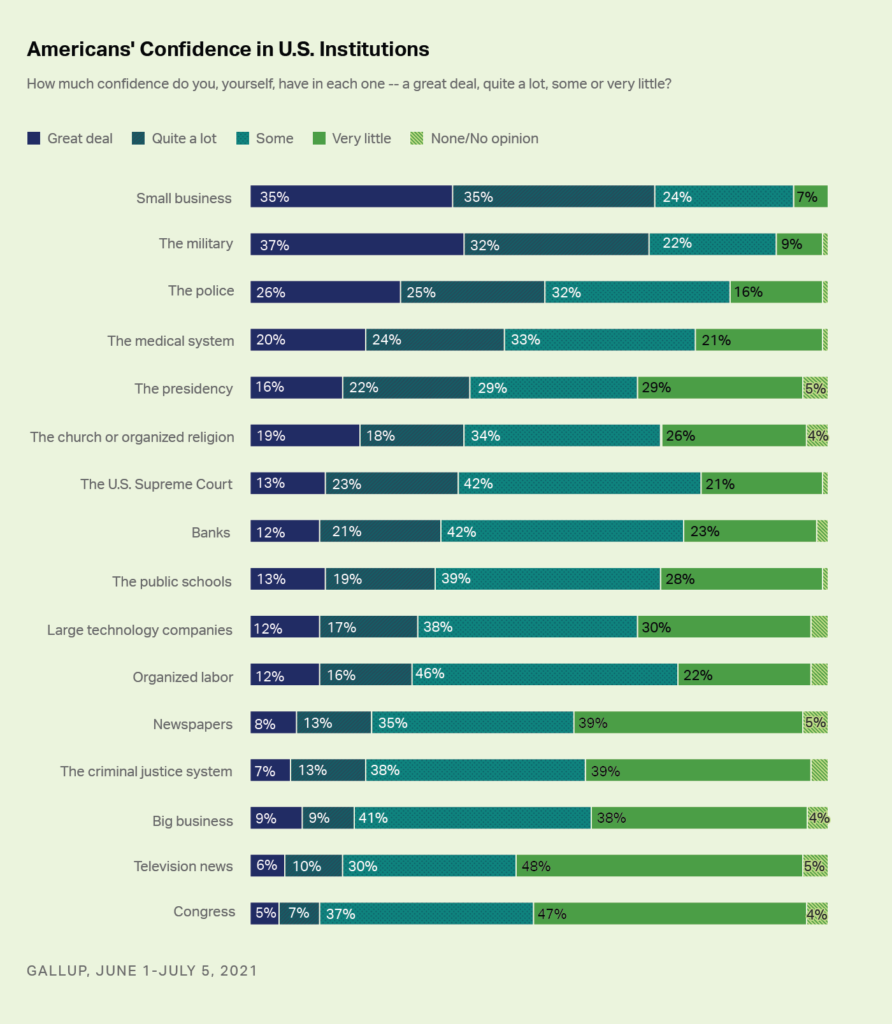 But Gallup found vast partisan differences with those trust numbers.

But “the largest partisan gap in confidence for any institution is for the presidency, with 49 points separating Democrats’ and Republicans’ ratings,” Gallup’s pollsters noted. 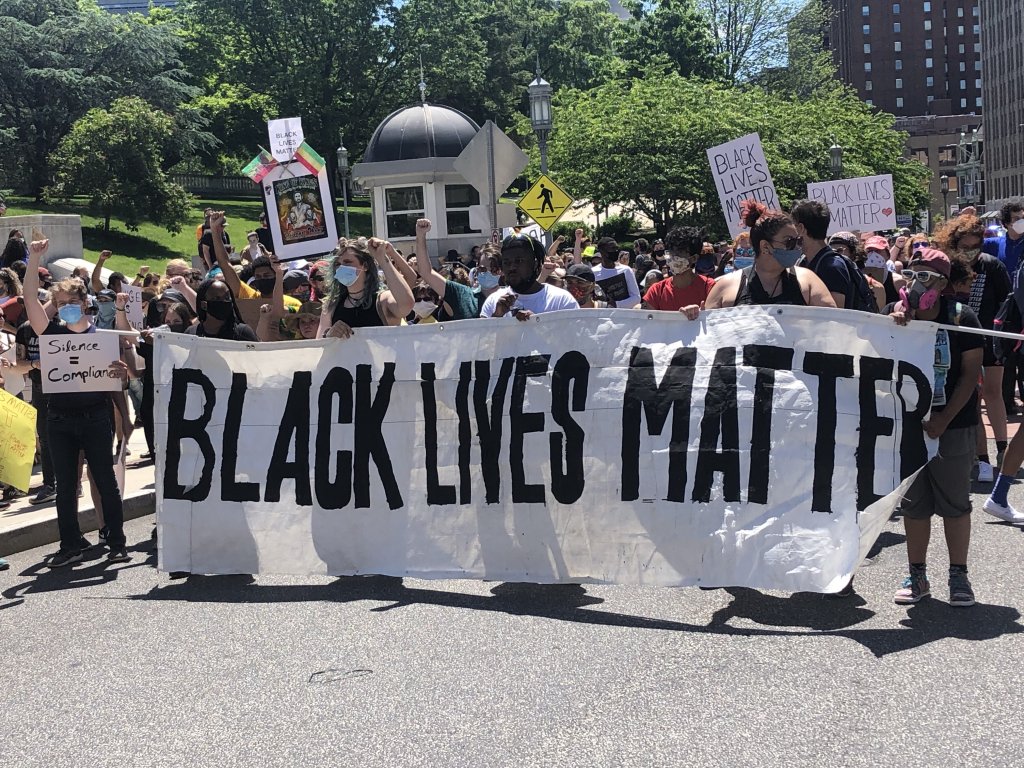 The poll also found pronounced differences in the way Black and white Americans view the police. A little more than a quarter of Black respondents (27 percent) said they had confidence in the police, up from 19 percent in 2020, the poll found.

Overall, 51 percent of all U.S. adults said they have confidence in the police, after it dropped to a low of 48 percent in 2020 last year.

Public confidence is still slightly below 53 percent level notched in 2019, prior to the death of George Floyd and other Black people at the hands of police officers nationwide in 2020.

The poll oversampled Black and Hispanic adults to to allow for reliable reporting on those demographic groups, according to Gallup those subgroups.

“Forty-nine percent of Hispanic Americans are confident in the police, significantly higher than the 27 percent among Black Americans but lower than the 56 percent among white Americans,” the poll found. “The 2020 Confidence in Institutions survey did not include an oversample of Hispanic adults; however, the available data suggests their confidence in police also fell last year but has rebounded this year.”

The Pa. State System of Higher Education has $75 million in one-time funds at its disposal. On Thursday, it laid out how it will spend the money, Marley Parish reports.

The U.S. House is set to vote next week on expanding the regulation of the “forever chemicals” known as PFAS, which have impacted water supplies in Pennsylvania and other states, Capital-Star Washington Reporter Ariana Figueroa writes.

On our Commentary Page this morning, two social scientists explain the phenomenon known as ‘child care insecurity,’ and how to address it. And columnist Josh Kurtz, of our sibling site Maryland Matters, examines the Democratic ‘identity crisis’ on policing. 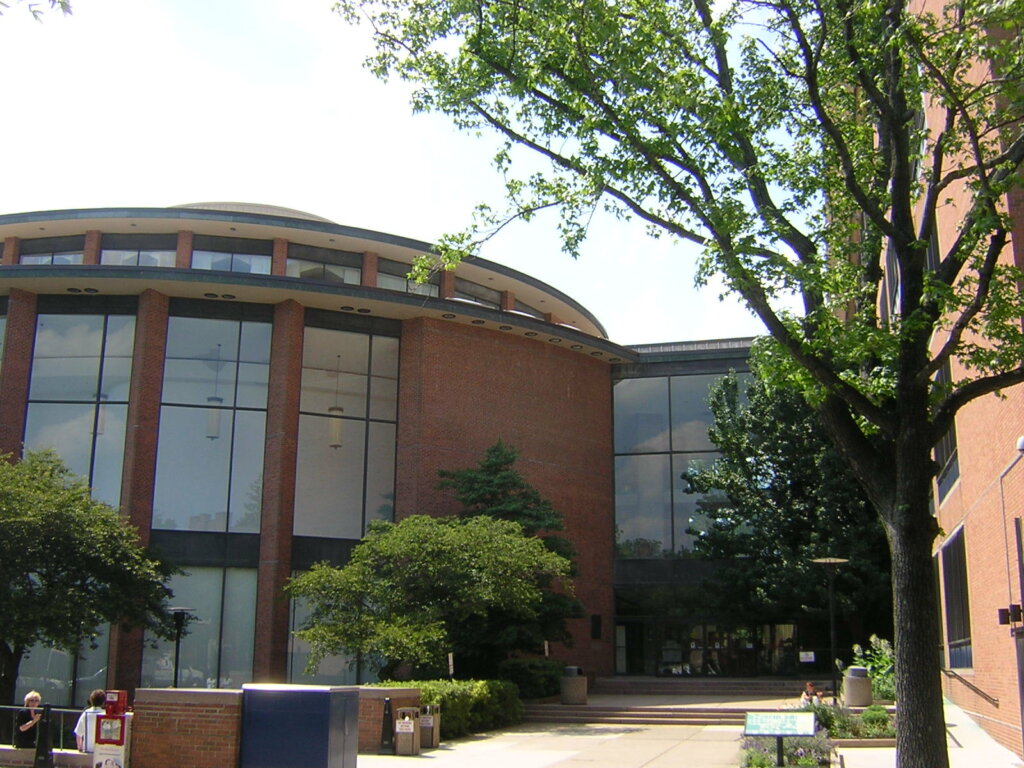 Elsewhere.
From Real Clear Politics, some food for thought: Which party is sane enough to win the Philadelphia suburbs?

The Post-Gazette takes stock of the 2022 U.S. Senate race in Pennsylvania.

PennLive talks to central Pennsylvania families about the new child tax credit, and how it will benefit them.

The Morning Call takes a look at an under-discussed part of the fight to raise the minimum wage: Raising the tipped wage for servers and other hospitality workers.

After a shooting, a southwest Philly grandmother has reopened her block as a safe space for play, WHYY-FM reports.

Former President Donald Trump is berating JCOS boss Mark Milley for his remarks about the possibility of a coup as Trump was leaving office earlier this year, New York Mag’s Intelligencer reports.

Stateline.org looks at how the shortage of federal firefighters is impacting such fire-prone states as California.

The U.S. House is set to take up the seven bills that make up the 2022 fiscal package. The Senate has yet to hold mark-up sessions, Roll Call reports.

You Say It’s Your Birthday Dept.
Best wishes go out in advance this morning to Jill Helsel Gingrich at La Torre Communications in Harrisburg, and to David DeKok, of Reuters, both of whom celebrate on Saturday. Additional advance best wishes to Kurt Knaus of Ceisler Media and Issue Advocacy, who celebrates on Sunday. Have a good weekend, friends.

Heavy Rotation
We’ll go out this week with one from English singer-songwriter George Ezra that keeps the summer-y vibe alive. It’s ‘Shotgun.’  May you spend your weekend riding under the hot sun. Lager tops entirely are optional, but entirely appropriate.

Friday’s Gratuitous Soccer Link
In the U.K., football clubs are the beating heart of the community. So when one collapses, it can be a body blow. The Guardian takes a look at the chaos afflicting Swindon Town, a League Two Club that finds itself without a manager and a shortage of players, just three weeks before the start of a new season.

Fútbol, Flags and Fun: Getting Creative to Reach Unvaccinated Latinos in Colorado