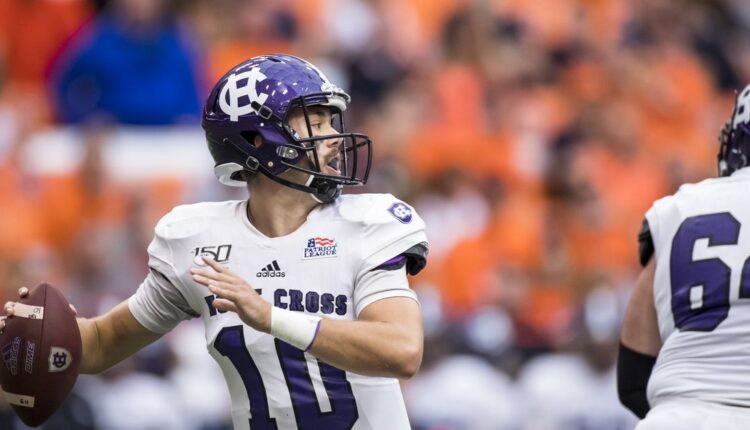 How did we get here?

For those of you who missed the announcement last week, One Foot Down “adopted” The Holy Cross Crusaders as our FCS team to follow suit this spring. This is 10000% out of bias as I played there for 4 years. HOWEEEEVAAAA, Holy Cross has a loyal following and a storied Catholic history so the fan bases can definitely coexist. We invite you to join in every week and prepare for some good old-fashioned spring football!

Holy Cross Crusaders are back

We did it guys. The moment you’ve all been waiting for … The College of the Holy Cross Crusaders FINALLY takes on its famous rival, Lehigh University Mountain Hawks, this Saturday. This is the first action for both teams this year as FCS scrapped the fall season in favor of spring this year. Holy Cross kicks off at 11 a.m. CST on ESPN +, which will air all of the Patriot League games this year. This is a highly anticipated matchup as a cut season makes every game so important. And now for the preview between the Crusaders and the Mountain Hawks.

The Mountain Hawks are led by a legendary beefcake (a term of endearment) from human head coach Tom Gilmore. Coach Gilmore is the toughest man I have ever met when he trained me at Holy Cross for 4 years. He’s a die-hard, old school defensive coach who always ends up in close matches. He fought 4-7 in his debut 2019 season, but the defeats were very close.

Lehigh was voted 4th in the preseason poll but is bringing back some talent at WR and TE, with two players receiving All Conference Honors in the preseason (Jorge Portorreal at WR and Alex Snyder at TE). You have a group of 6 battling for the quarterback starting job so we’ll have to wait and see how that plays out this weekend. One problem area is definitely their offensive line, which may struggle to keep up with the athletic defensive line and linebacking core of the Crusaders. You will give a physicality to the defense, but the offensive firepower of the Holy Cross should keep it honest. This is definitely a build year for Lehigh, but look for them to showcase a die-hard style of Tom Gilmore football.

Holy Cross is led by a rising star in the coaching world in Bob Chesney. He’s young, energetic, and has brought some recruits to Holy Cross that the Crusaders have never seen. He led her to her first Patriot championship title in ten years in 2019 and will try to build on this momentum in the shortened spring 2021 season. 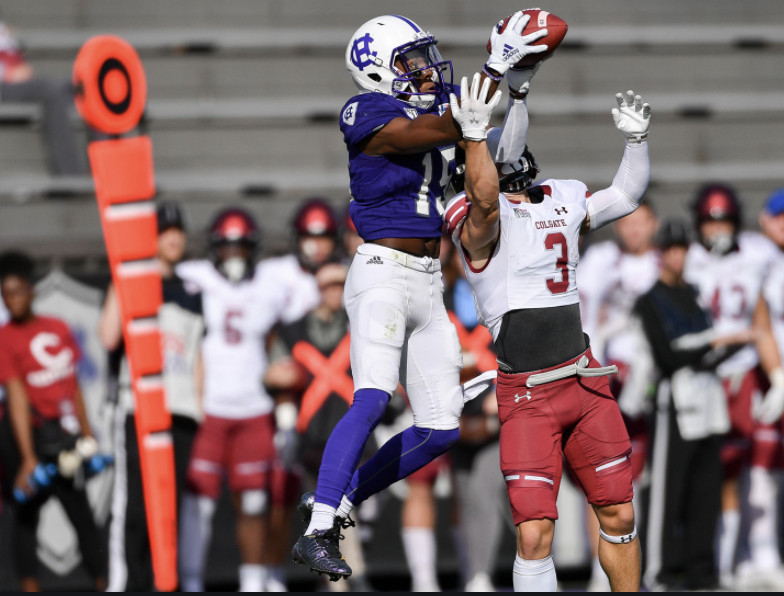 On the offensive, the crusaders are led by reigning starting quarterback Connor Degenhardt, who is put under pressure by Senior Matt Considine, a Wake Forest Transfer. Degenhardt had an up and down year in 2019, but will focus on getting his playmakers the ball and letting them run wild. These playmakers include WRs Ayir Asante, Tenio Ayeni, Spencer Gilliam and RB Peter Oliver. They also stand behind a STOUT and beefy offensive line led by future Duke Blue Devil Brian Foley (he will graduate after the season). Defense will also be a strength, with all the Patriot League picks in the preseason in DE Benton Whitley, LB Jacob Dobbs and Safety Joe Lang. Also make sure that CB John Smith has a dominant year as a shutdown corner. This is a veteran team hungry to repeat themselves as Patriot League champions.

Free time will inevitably add to a slow start on both sides. I think Holy Cross settled in with some explosive offensive play and strong defense. Look for a 7 point game at halftime followed by a comfortable win for the Crusaders, who will retire in the second half. Ayir Asante will exceed 150 APY and Peter Oliver will have 2 points. The score I get myself into is 31-17 with Holy Cross in the best position to take FCS by storm.

Join in and share your point predictions below. Similar to hot / cold takes, I’ll share the most accurate, “wildly inaccurate” and most interesting ones. I know we say GO IRISH but let’s ring the doorbell for the week with HERE WE GO CROSSSSS !!