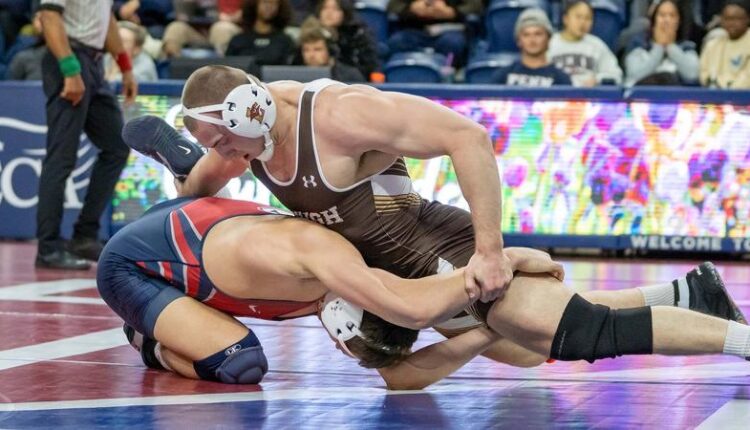 ANNAPOLIS, Md.—No. 19 Lehigh won five of the first seven bouts on the way to a 21-16 victory over Navy Saturday night at Alumni Hall. Sophomore Malyke Hines set the tone early with a win over nationally-ranked Josh Koderhandt and after the Mids came back within 17-10, first-year Carter Bailey clinched the victory with a major decision at 125.

Lehigh improves to 6-7 on the dual season, while Navy falls to 1-5.

Hines took the mat first and led 6-1 after the first period behind two takedowns and a two point near fall. He added a second period reversal, a third period escape and riding time to pick up the victory, improving to 4-0 in duals in the new year.

Malyke Hines with the toss for 2+2!

Sophomore Manzona Bryant IV followed at 149 and put Lehigh up 6-0 with a 6-2 decision over Kaemen Smith. Bryant scored takedowns in each of the first two periods.

Navy captured the next two bouts to tie the dual at 6-6. Max Brignola bumped up to 157 but fell 4-1 to Andrew Cerniglia and at 165 Luca Frinzi dropped a 6-0 decision to Val Park.

Sophomore Jake Logan put the Mountain Hawks in front for good, gutting out a 6-4 win over Sammy Starr at 174. Logan had the only three takedowns in the bout but needed the last one in the final seconds of regulation to break a 4- 4 ties

The match winner for Jake Logan!

Graduate student Tate Samuelson followed with an 8-2 decision over David Key at 184, scoring a takedown in each period.

Sophomore Michael Beard followed Samuelson with Lehigh’s first bonus win of the night, a 21-6 technical fall over Jacob Koser. Beard totaled eight takedowns, including five in the third period, and had a four point near fall in the first to pick up his second technical fall of the weekend.

In a matchup of ranked heavyweights, Navy’s Grady Greiss broke open a 3-1 match with a late cradle for six points to post a 9-1 major decision over first-year Nathan Taylor.

Bailey needed an injury timeout in the first period and trailed 3-0 after one, but rallied in the second period to tie his match with Grant Treaster at 3-3. Treaster chose down in the third period and Bailey rode out, scoring a trio of four point near falls to post a 16-3 major decision, clinching the win for the Mountain Hawks.

Malyke Hines set the tone tonight against Navy with an early win over a ranked opponent. pic.twitter.com/uS3FzNAwZf

The Mountain Hawks will wrestle another two-dual slate next weekend. On Friday, Lehigh travels to Columbia for a 7 pm match that will be broadcast on ESPN+ with audio coverage on Fox Sports Radio 94.7 FM and 1230 AM. On Saturday, Lehigh welcomes No. 10 Arizona State to Leeman-Turner Arena at Grace Hall for a 6 pm match. Tickets are going fast for the Arizona State dual, which will be a White Out featuring a rally towel giveaway for fans in attendance. Tickets can be purchased at LehighTickets.com or by calling 610-7LU-GAME during business hours.

Abortion Debate Ramps Up in States as Congress Deadlocks