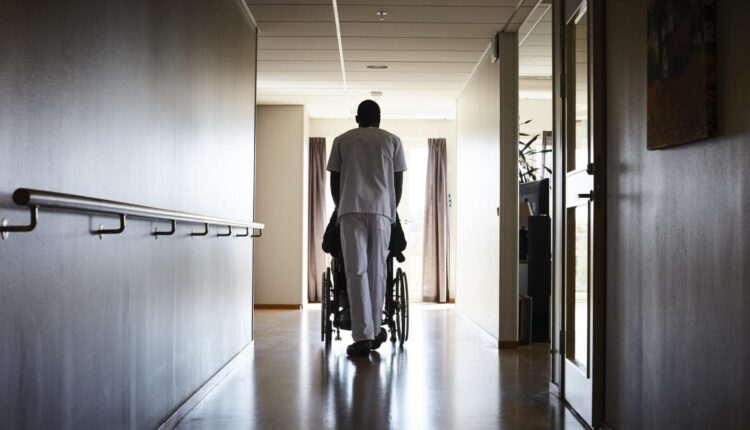 Among the hard truths about the COVID-19 pandemic — and there were many — was the glaring reality that Black and Brown Pennsylvanians were disproportionately impacted by the worst public health crisis in a century.

A newly released report details the pandemic’s impact among the Black and Brown residents of Pennsylvania’s nursing homes.

The top-line takeaway: “Systemic race-based inequity has created a crisis within a crisis for Black and Hispanic nursing home residents,” the report, by a coalition of advocacy organizations concludes.

“There is a longstanding history of racially segregated and unequal quality of care for Black and Hispanic nursing home residents. This inequality has existed since before Harriet Tubman opened aging facilities for Black Americans with the help of the African Methodist Church,” said Kee Tobar, the director of Race Equity & Inclusion at Community Legal Services of Philadelphia, which was among one of the report’s authors.

Pointing to a Kaiser Health Network study of Centers for Disease Control & Prevention data, the new report drives home the vast racial disparities of the pandemic among all Americans, noting that “African Americans ages 65 to 74 died of COVID-19 five times as often as White individuals.”

The situation in nursing homes was even more dire.

“Sadly, we have seen the evidence in the significant loss of black lives during the pandemic. The only way forward is for Pennsylvania to act – equity is the only acceptable outcome,” Jessica Hartfield, the ombudsman supervisor at the Center for Advocacy for the Rights & Interests of the Elderly, said in a statement.

The report makes a number of recommendations for reform, some of which are detailed below. 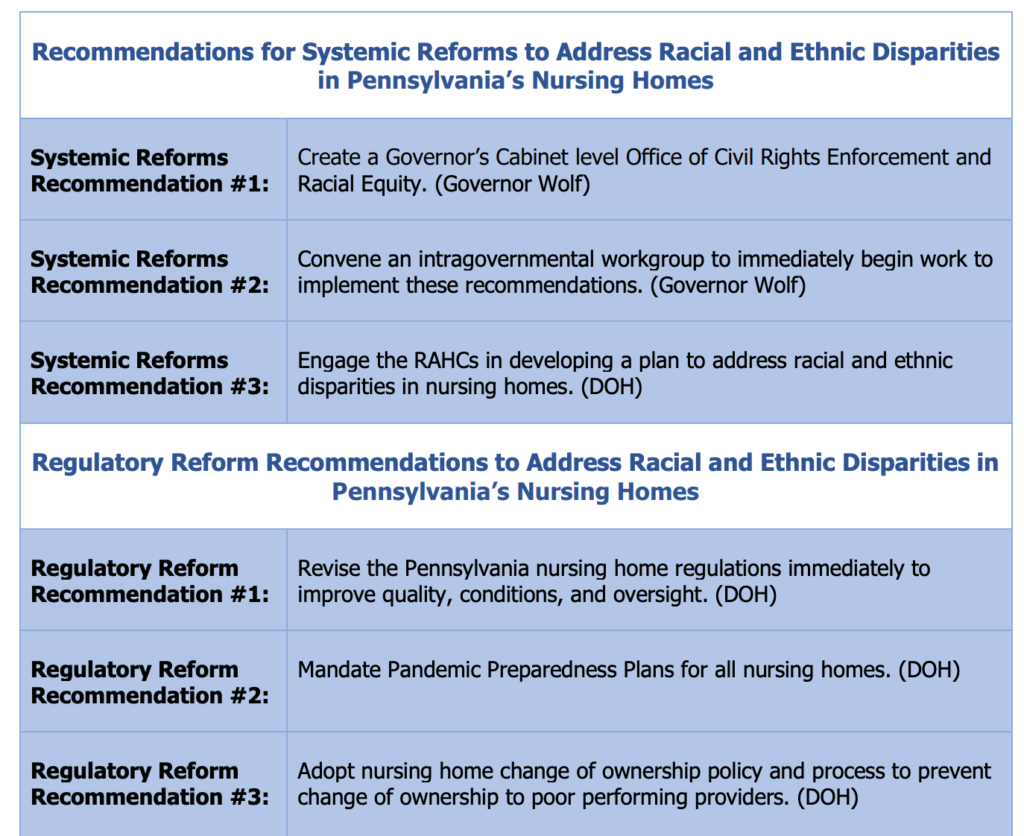 And because “nursing homes with primarily Black and/or Hispanic residents are disproportionally understaffed, enacting this proposed regulation would address racial and ethnic disparities in addition to enhancing quality of care for nursing home residents,” the report notes.

Our Stuff.
Gov. Tom Wolf has ordered thousands of nurses, prison guards, and other staffers in state-run facilities to either get vaccinated or be tested weekly for COVID-19, Stephen Caruso reports.

The U.S. Senate voted 69-30 on Tuesday to approve a sweeping bipartisan $1.2 trillion infrastructure package, a milestone for one of President Joe Biden’s priorities after months of negotiation. Pennsylvania’s two senators, Democrat Bob Casey and Republican Pat Toomey split on their votes, Capital-Star National Correspondent Jacob Fischsler writes, with an assist from me.

Officials in Republican-controlled Tioga County have called for an end to the “unnecessary chaos” caused by a proposed forensic investigation into the 2020 general and 2021 primary elections, Marley Parish reports.

A Philadelphia Municipal Court judge has expanded the eviction moratorium to halt “lockouts” for certain tenants but the order won’t go into effect until Saturday, leaving many still at risk of eviction, our partners at the Philadelphia Tribune report.

On our Commentary Page this morning, Marc Stier and Eugene Henninger-Voss of the Pennsylvania Budget & Policy Center, say conservative critics of a landmark school funding lawsuit have it wrong: New state funding doesn’t necessarily go to the school districts that need it the most. And columnist Frank A. DeFilippo of our sibling site, Maryland Matters, says it may take being totally ostracized to convince COVID skeptics to get vaccinated and wear a mask.

Elsewhere.
Philadelphia City Council has become the first branch of city government to require vaccinations for its employees, the Inquirer reports.

The Post-Gazette profiles the independent candidates for Pittsburgh mayor.

A Luzerne County restaurant owner is rewarding patrons for getting vaccinated, the Citizens’ Voice reports.

Fayette County has moved back to a substantial level of virus spread, the Observer-Reporter reports.

City & State PA. is taking nominations for its 50 Over 50 honors.

Counties in southeastern Pennsylvania are taking the lead in a ‘maddening’ lapse in eviction protections, WHYY-FM reports.

Democrats in the U.S. Senate pushed through a sweeping, $3.5 trillion budget resolution using the process known as reconciliation during the small hours of Wednesday morning. The Washington Post has the details.

What Goes On
The House and Senate Agriculture & Rural Affairs committees meet in joint session at 10 a.m. at the Red Barn Annex at the Russell E. Larson Agricultural Research Center, in Pennsylvania Furnace, Pa.

You Say It’s Your Birthday Dept
Best wishes go out this morning to Dickinson College journalism prof and veteran reporter, Amy Worden, who celebrates today. Congrats and enjoy the day.

Heavy Rotation
Here’s a classic from The XX to get your Wednesday morning rolling. It’s ‘On Hold.’

Wednesday’s Gratuitous Soccer Link
With the start of a new Premier League campaign almost upon us, The Guardian is doing its annual preview of each club. This morning, it’s newly promoted Norwich City – and the big question: Will the Canaries survive the season?

It’s not a tough choice: Submit to the vax and the mask or become a pariah | Opinion