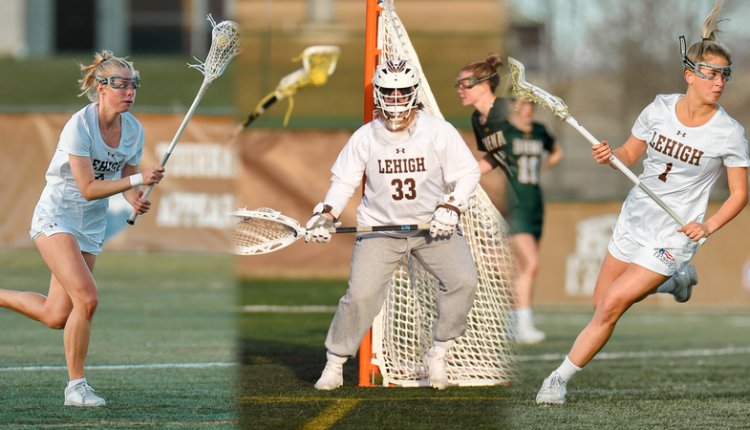 BETHLEHEM, Pa. – With the season less than three weeks away, the Lehigh women’s lacrosse team was predicted to finish fourth in the Patriot League preseason poll announced Tuesday morning. In addition to the team’s preseason ranking, junior Hayley Hunt was named the league’s preseason Goalkeeper of the Year. Hunt was joined on the preseason all-league team by seniors Gabby Schneider and Emma Eberhardt.

Loyola Maryland finished first in the poll with 166 points and 18 first-place votes while Army West Point (152) and Navy (136) followed in the second and third positions. Colgate finished fifth behind Lehigh with 90 points followed by American (77), Bucknell (59), Boston University (49), Holy Cross (45) and Lafayette (18).

Hunt, who was recently named USA Lacrosse Magazine preseason All-American, led Lehigh’s individual honors. The Philadelphia native made her first year at Lehigh count, ending the 2022 season by leading the nation in saves (216) and save percentage (.543). Hunt ended the season with the highest save percentage in the league since 2009 while ranking third in the league and 25th in NCAA DI with 10.87 goals-against average.

During the season, Hunt received Patriot League Goalkeeper of the Week and IWLCA National Co-Defensive Player of the Week after stopping 30-of-40 shots against Lafayette and Holy Cross. The junior goalkeeper garnered second team All-Patriot League honors and honorable mention All-American from both USA Lacrosse Magazine and ILWomen following last season.

The senior finished eighth in the Patriot League in goals per game (2.50) and points per game (3.72). Eberhardt had 14 multi-goal games and eight hat tricks for Lehigh, recording multiple points in all 18 contests.

The Mountain Hawks will open up the season on Friday, Feb. 10 against Delaware in Newark, Del.

Asian in the ′80s: A glorious time of innocence, a time of great ignorance | Opinion