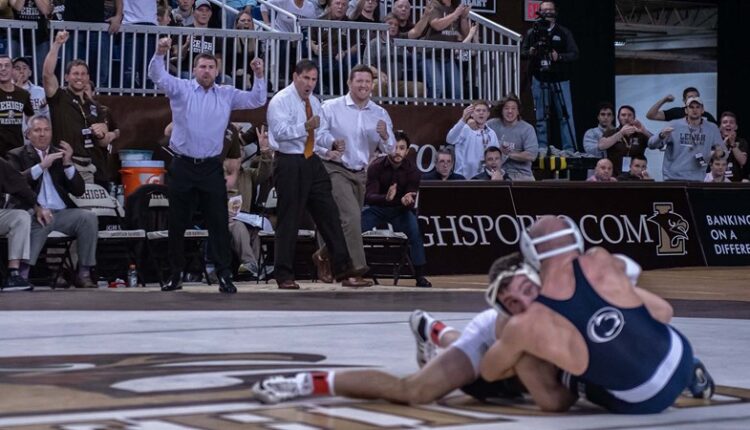 BETHLEHEM, Pennsylvania – Lehigh head coach Pat Santoro has announced the addition of nine student-athletes to join the Mountain Hawks’ wrestling program. The four-time defending champion of EIWA has added eight newcomers and one student athlete. As a group, the incoming class has won four state championships and won 19 medals at state tournaments.

“We put together a really nice class,” said Santoro. “There’s a lot of talent in this group. These guys have a great work ethic. I’m excited to see what this course brings to our program.

“We’re trying to get ‘Saturday wrestlers’,” added Santoro, referring to wrestlers competing on the final day of the NCAA championships. “That has been our goal in recent years. You have to fill the weight classes, of course, but we’re looking for guys who will still be wrestling at the NCAA tournament last Saturday.”

Information on the nine new additions can be found below. The newcomers will join a core of returnees that includes 10 NCAA qualifiers, four former EIWA champions and three NWCA All-Americans.

Four-time state qualifier and two-time place winner, Max Brignola comes from Rumson-Fair Haven High School in New Jersey. Brignola finished fourth with 152 last season after finishing eighth in 2020 with 145. As a three-year team captain, Brignola is a four-time regional place winner (and 2021 champion) and three-time district placement winner (and two-time champion). Brignola set a career record of 124:21 and was freestyle state champion in 2019.

Todd DeGroat, one of two predicted heavyweights in the incoming class, is from Vestal, NY. He is a three-time NHSCA All-American and won a second-year title with six falls in his tournament in 2019. DeGroat ranked fifth in New York State for its sophomore year. He also played soccer at Vestal Central and despite injuries, set a career record of 92:22 on the mats with 65 falls in his last two years.

Patrick Edmondson is from the same high school program that created the Kent and Jaret Lane brothers and is one of two Southern Columbia graduates in the new class. Edmondson racked up 135 career wins and was a two-time PIAA AA place winner, finishing sixth in 2018 with 113 and third last season with 145. A two-time district champion and 2020 regional champion, Edmondson recorded 67 falls in his high school career.

The other Southern Columbia alumnus in the new class is Gaige Garcia, who is moving to Lehigh after attending the University of Michigan in 2020-21. With 195 title wins in 2019 and 2020, Garcia was two-time PIAA champion and four-time place winner with third (2018) and fifth (2017) places. He went 163-6 in his high school career with 103 falls and went 48-0 as a senior. Garcia was FloWrestling in 22nd place overall and second in his weight class. He also wrote in soccer and track and field for Southern Columbia and was a four-time all-state team first-team run in soccer. Garcia will compete in both wrestling and soccer in Lehigh.

Four-time PIAA state qualifier and two-time place winner Zac Martin is coming to Lehigh from Neshaminy High School. Martin finished sixth at 132 in 2020 and rose to 152 in 2021, where he finished eighth. He is a four-time Southeast regional course winner and two-time champion, as well as a four-time district course winner and two-time champion. The two-year team captain scored 119 victories and was named to the District One Academic All-League Team and the PWCA Academic All-State Team.

Successful pinner Matt Rodriquez comes to Lehigh from Ridgeview High School in Florida. Rodriquez, a four-time Florida medalist and 2021 state champion, went 258-8 for his high school career with a national NFHS record of 207 falls. In his senior season, Rodriquez went 57-0 with a streak of 52 consecutive pins. He finished third in the state in 2018 and finished second in the state in 2019 and 2020 before breaking through his undefeated senior season in which he did not allow a point. Rodriquez is a four-time district and regional champion who was named Florida Times Union Wrestler of the Year in 2021. He is a three-time NHSCA Academic All-American. Rodriquez won titles at MidWest, Big Buck, and Aztec Nationals and received All-America Honors from Tulsa Nationals and NHSCAs.

Nathan Taylor, a 2021 PIAA champion from Brookville, is the second heavyweight in the incoming class. Taylor went 31-1 as a senior with 20 falls. Taylor, two-time district and regional champion, also placed at the state tournament in 2020 and finished fourth. He set a career record of 87-24 with 46 falls. Well known in soccer, Taylor will become the fifth heavyweight in Lehigh history to win a state championship in Pennsylvania.

Rounding out the incoming class is Jack Wilt, overweight from Seton Hall Prep in New Jersey. Wilt finished third at the 2021 state tournament in New Jersey with 195 and is a three-time district finalist who won two titles and a two-time regional finalist with a championship. He also won two Super Essex Conference championships and was named Super Essex Boys Wrestler of the Year in 2021. Due to the COVID-19 pandemic, there was no conference or district tournament in 2021. Wilt also won the Outstanding Senior Athlete Award from Seton Hall Prep.