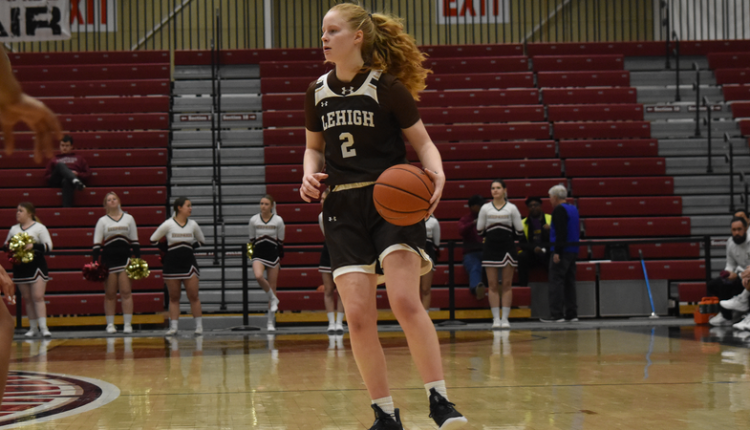 Lehigh got off to a fast start. The Mountain Hawks had a 14-point lead with 2:02 to play in the first quarter and finished the first frame shooting 8-of-16 from the field.

Abby Antognoli had 14 points in the first half to lead Lafayette. The Lehigh defense stepped up big, holding her scoreless in the third period. She finished the day with 16 points and eight assists.

“We switched a little bit trying to keep her in front, but the only thing is she made others better with eight assists in the second half, and that’s what good players do,” said head coach Addie Micir.

Frannie Hottinger led the way for Lehigh. She recorded her 11th double-double of the season and scored a team-high 21 points to go along with 14 rebounds. Jamie Behar was the only other Lehigh player to record double digits. The junior had 13 points. Mackenzie Kramer was close, finishing with eight. Kramer also dished out a game-high nine assists.

The second half would once again be a back and forth battle. Lehigh held a 15-8 advantage in the third quarter, but the fourth quarter would be the difference in Saturday’s game. Lafayette outscored Lehigh 20-13 in the final frame.

Jamie Behar knocked a three-pointer down with 5:37 left in the game to give Lehigh a 51-50 lead, but Kylie Favors hit a three-pointer with 4:35 left to put Lafayette up by two. After Favors made that three, Lafayette would hold a lead for the remainder of the game. Lehigh tried to come back, but Lafayette had an answer every time.

Lehigh called a timeout and had the ball for a game-tying three with five seconds left, but ultimately couldn’t find the equalizer before the game ended. Andrews had a team-high 21 points for Lafayette.

One of the main differences in Saturday’s game was turnovers. Lehigh had 15 of them, and Lafayette had 10. Lafayette ended up finishing the game 23-of-66 from the field, while Lehigh was 23-of-60.

The Mountain Hawks held a 44-35 advantage on the glass on Saturday.

The Mountain Hawks will look to rebound on Wednesday at home against Holy Cross. Tip off is scheduled for 6 pm