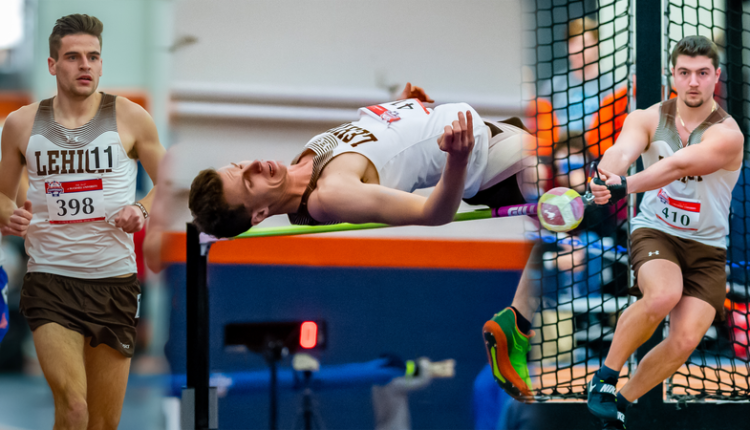 BETHLEHEM, Pa. – The Lehigh men’s track and field team will return to action this weekend following its 54-32 victory over Sacred Heart at the Angry Birds Invitational last Saturday. The Mountain Hawks will compete at two meets this weekend, with some members traveling to the OceanBreeze Complex in Staten Island, NY for the Villanova Invitational. Other members of the team will remain in Bethlehem for the Moravian Indoor Meet, which will be hosted by Moravian inside Rauch Fieldhouse.

Lehigh secured his victory over Sacred Heart last weekend by claiming 13 first-place finishes, eight of which took place on the track.

In the first track event of the day, first-year Carter LoPresti claimed the win for Lehigh, finishing with a time of 16:06.45. LoPresti, who finished third overall, earned the victory as the top two finishers were unattached runners. Sophomore Aidan Lynch grabbed the Mountain Hawks’ second first-place finish of the weekend, winning the mile with a time of 4:20.26.

Following the Mountain Hawks’ fourth victory on the track, first-year Nikolas Cruz went on to earn his first collegiate win in the 60m with a time of 7.12. Lehigh’s middle distance and distance runners continued to extend the Mountain Hawks’ winning streak with senior Connor Melko (1:56.81) earning a victory in the 800m and sophomore Kevin Harvey (8:54.66) finishing first in the 3000m.

Lehigh claimed its final victory on the track in the 4×400 relay with Melko, sophomores Ethan Hood and Ryan Wycherley and first-year Noah Kim finishing the race with a time of 3:24.99.

While the Mountain Hawks dominated on the track, they were able to bring the same energy into the field events, winning five more events. In the throws, sophomore Liam Lovering claimed first-place finishes in both the weight throw (16.31m) and shot put (15.62m).

Junior Conor Reilly claimed his second consecutive win of the season in the pole vault, winning the event with a mark of 4.71m. Sophomore Mulenga Malama and first-year Daniel Givens earned two more first-place finishes for Lehigh in the jumps. Malama won the long jump with a mark of 6.53m while Givens won the triple jump with a mark of 13.29m.

The Moravian Indoor Meet will begin at 10 am on Saturday while the Villanova Invitational is set to begin at 4 pm Live results for Moravian’s meet will be available on MitchellTiming.com while results for Villanova’s meet can be found on MileSplit.com.