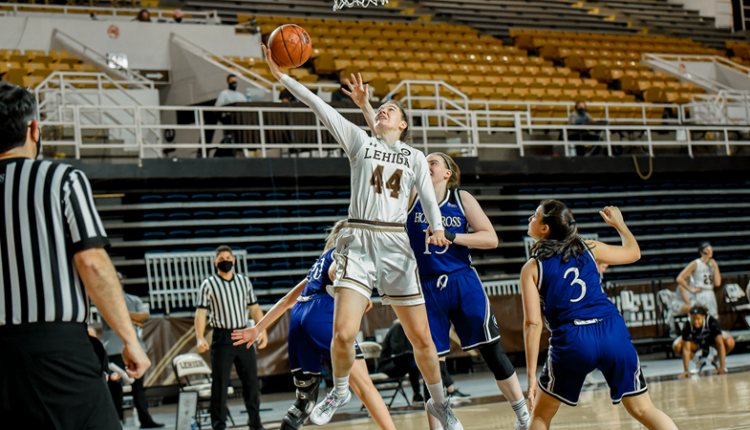 BETHLEHEM, PA. – It depends on one game to determine the champions of the 2020-21 Patriot League tournament as the fourth-filled Lehigh women’s basketball team takes on the second-occupied Boston University at the Case Gym on Sunday at 4 p.m. who will be allowed to enter the league starting next week in the NCAA tournament represented? Playing in the title game for the first time since 2015, a win for the Mountain Hawks would secure the title for the fourth time in program history and for the first time since 2009-10.

With a win over the Terriers on Sunday, the Mountain Hawks would qualify for the fourth time for the NCAA tournament.

Even though Lehigh only played four games last month, he still found ways to fight back breaks and quarantines for consecutive wins at the Patriot League tournament. First with a quarter-final win against Holy Cross and then with a surprise over the then unbeaten Bucknell on Thursday evening in the semifinals in the Sojka Pavilion.

Led by five double-digit Mountain Hawks, including Emma Grothaus, who scored 12 points with 14 career-sized boards, Lehigh led almost all of the competition, keeping the bison for the first time in the entire season and below 60 points, the lowest since 54 points the acquisition of BU at the end of the 2019-20 campaign. Mary Clougherty led with 13 points, Frannie Hottinger with 12, Mackenzie Kramer and Clair Steele with 10 points.

Surprisingly, despite entering the semifinals as one of the five best 3-point shooting teams in the nation, which currently ranks fifth with 10.0 3-point points per game, the Mountain Hawks shot only 25 percent (5-20) from beyond-the-arc, still winning the game, shot 44.4 percent (24-for-54) overall out of the field.

But it was the defense that really shone for Lehigh against Bucknell, forcing 15 bison turnovers and nine steals, including five blocks. The Mountain Hawks only held Bucknell 35.6 percent (21 to 59) off the field and 8.2 percent (4 to 22) from beyond.

Sunday will be a battle between the Patriot League top-scoring offensive (Lehigh, 72.8 ppg) and the top-scoring defense in the league (Boston U, 53.4 ppg).

There are few words to describe how solid Boston University was over the 2020-21 period, and one thing that comes to mind is “excellent”. As with Lehigh, the term “unfinished business” is widespread among Terriers as they want to stamp a ticket to the NCAA tournament for the first time since 2003.

The Terriers won a quarter-final against Lafayette and defeated the Americans in the semifinals on Thursday evening with 72:51.

Boston University received a 23 point try from Sydney Johnson while Emily Esposito added 16 points with four rebounds. Riley Childs finished with a 12-point, 11-board doubles doubles and Maren Durant led with 14 tebounds, six points and a pair of blocks.

Johnson, who led BU offensively on Thursday, had as much success in the quarter-finals against Lafayette as they did against the American, almost ending with a triple double of 19 points, seven rebounds and nine assists.

The irony of this championship game showdown is that it was supposed to be the semi-finals matchup almost a year ago but has been canceled due to the start of the COVID-19 pandemic. Lehigh drove up and down from Boston without playing off the rest of the Patriot League tournament.

Although Lehigh falls 8-9 behind BU in the all-time series, he has an 8-6 lead in Patriot League games against the Terriers from the 2013/14 season. This is the first matchup between the two teams in the tournament game.

The matchup on Sunday begins at 4 p.m. live on national television via CBS Sports Network with Chris Hassel (PxP) and Julianne Viani (Color). The game will also be broadcast live on LV Fox Sports Radio 1230/1320 AM and 94.7 FM in Allentown with Matt Markus in a play-by-play call.