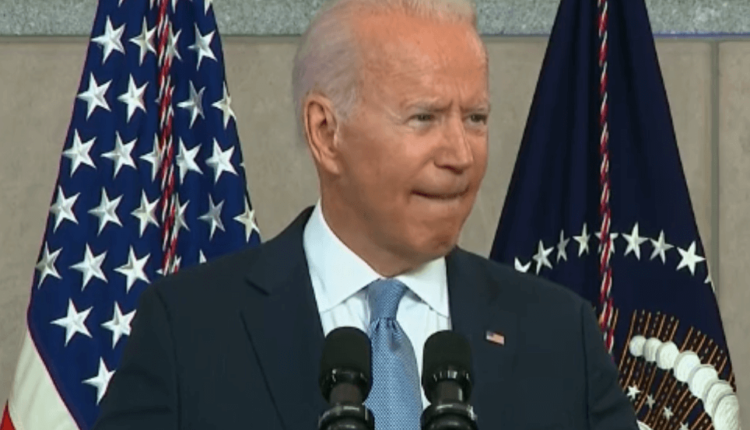 In Philly, questions over whether Biden is doing enough to pass federal voting rights standards

PHILADELPHIA — The national battle over voting regulations heated up this week as President Joe Biden delivered a high-profile speech in Philadelphia where he warned the “21st-century Jim Crow assault is real, it’s unrelenting.”

But while some praised Biden for using his bully pulpit to push for federal voting standards, others questioned whether the president went far enough.

Jay McCalla, a Philadelphia writer and political commentator, said Biden failed to lay out in his speech how he intends to secure the passage of a federal voting rights proposals, noting the absence of any mention of eliminating the filibuster in the U.S. Senate.

“He basically reminded us that he understands the problem,” McCalla said. “OK, great. He had no plan. He offered no hope.”

During his nearly 25-minute speech inside the National Constitution Center on Tuesday, Biden warned that voting regulations enacted in more than a dozen states and proposed in others were threatening to usher in partisan elections and new rules about which votes are legitimate.

The president laid out his case for enacting a pair of federal voting rights proposals that he says would thwart those “new and literally pernicious forms” of voter suppression.

Biden called on Congress — again — to pass the For the People Act and the John Lewis Voting Rights Act, the latter of which is named after the late U.S. representative from Georgia and noted civil rights leader. The proposals would set national voting standards and could overturn some of the recently passed voting regulations.

The proposals would improve access to voting, fight voter suppression, end partisan gerrymandering, and re-establish those protections in the 1965 Voting Rights Act that have been weakened by court challenges in the U.S. Supreme Court in recent years.

Both proposals put forward by Democrats are stalled in Congress. Democrats and independents who align with them control the U.S. Senate thanks to the tie-breaking vote of Vice President Kamala Harris. But legislation requires 60 votes to overcome a filibuster. Pressure continues to grow on Democratic leadership to alter or eliminate the filibuster.

Biden condemned the passage of voting laws in Republican-controlled state houses across the U.S., calling them an assault on the right to vote and the “most significant threat” to the nation since the Civil War.

Republican lawmakers in 17 states, including Georgia, have enacted at least 28 new statewide voting regulations, and an additional 400 proposals regulating voting access are being considered in state legislatures, like Texas, the president said.

Critics say the new voting regulations will make it harder to vote, especially among people of color; supporters counter that the laws will safeguard the voting process and prevent fraud.

“Speeches are good but we need action,” Royster said. “Pennsylvania is the northernmost southern state in America. … And the reality is is that we have a legislature in the state House and state Senate that want to pass draconian, backwards laws that will take us back into Jim Crow deliberately.”

With little chance of the passage of federal legislation at the moment, McCalla questioned whether Biden’s speech was self-serving, saying it appeared to “stem criticism of him for failing to get anything done.”

“Suggesting that election integrity measures such as voter ID and prohibitions on ballot harvesting are reminiscent of Jim Crow is false, offensive, and trivializes a dark period of actual systemic racism in parts of America. President Biden knows that the state laws he has attacked are in many cases less restrictive than that of his own home state of Delaware.”

While Philadelphia, a Democratic stronghold, does not have restrictive voting regulations like in other states, City Commissioner Omar Sabir said disinformation around elections was among the top threats to voting here, which can inhibit people from casting a ballot.

“We have to be vigilant on the disinformation. That’s concerning,” Sabir said, who is one of three elected officials tasked with overseeing Philadelphia’s elections.

Several Democratic-elected officials warned that the Republican-controlled Pennsylvania House of Representative and Senate could put in place voter restrictions in the future.

“What happens in Georgia can happen in Pennsylvania,” Evans said.

“It’s not just in Texas, it’s not just in down South, as people say — it’s up South in Philadelphia, Pennsylvania, and Harrisburg,” Parker said. “It is here.”

The Rev. Al Sharpton said leading up to Biden’s speech that he wanted the president to acknowledge race was a factor in the critical national issue of voting access. He said Biden “needs to go as far as he can” to protect voting rights.

“Everything’s at stake,” the national civil rights leader said. “Everything we want comes from what is voted on.”

Our teachers are essential workers. We need to treat — and pay them — that way | Opinion