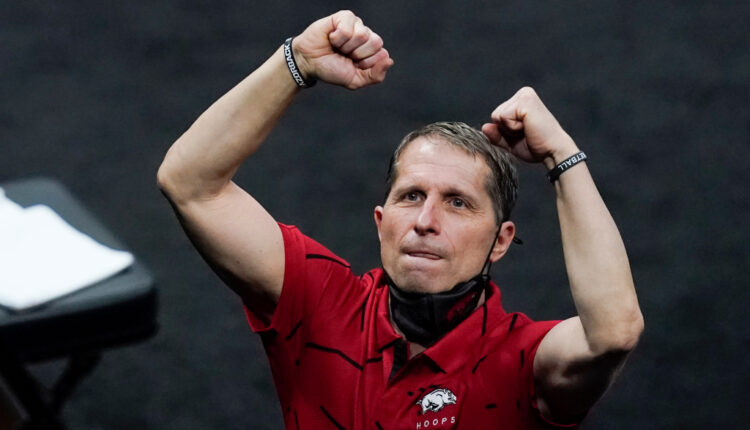 But the university probably waited two years too long for a chance at Musselman.

At the same time — April of 2019 — that Minnesota was giving Pitino a two-year contract extension, inexplicably increasing his annual salary to an average of $2.46 million, Arkansas was signing the son of former Gophers-Timberwolves coach Bill Musselman to a five-year contract averaging $2.5 million after Eric spent the previous four years making Nevada a perennial NCAA tournament program.

Following the current NCAA tournament (Arkansas entered No. 10-ranked), look for Musselman, 56, to sign an extension that could approach $4 million a year.

That’s unless Indiana, which is paying Archie Miller $10.4 million to take a hike, and its manic boosters make Musselman a can’t-refuse offer. Eric’s current buyout is $5 million through April 30; it drops to $1.5 million a day later.

If, miraculously, Minnesota, which is projected to lose some $40 million in its athletics department due to the coronavirus pandemic and still owes $42 million on its $166 million Athletes Village, could find a way to afford Musselman, he’s proven it would propel the program to national prominence.

Eric, then 7 years old, was a part of that on-floor show nearly 50 years ago. Plans are for him to reintroduce it at Arkansas next season. No doubt it would delight fans if he were to bring it back to Williams Arena.

Musselman’s paternal half-brother Max, a Minnetonka grad who was a student manager for Gophers women’s basketball coach Lindsay Whalen in her first season, resides in the Twin Cities, and Eric has a myriad of friends and fans there. Remember, he was a Timberwolves assistant to his father during the 1990-91 season before becoming a two-time NBA head coach.

The big challenge facing Coyle is to find a coach who can recruit and draw ticket buyers. In Pitino’s last season (2019-20) when fans were allowed to attend games before the pandemic, Williams Arena attendance averaged just 10,232 in a 14,625-capacity building.

There’s little doubt that Musselman, with the right in-state recruits and the storied pregame show, would sell out Williams Arena his first season. He did that at the 11,536-seat Lawlor Events Center in Reno. His last season, there were standing-room-only tickets.

By the way, in 1984, there wasn’t a single Division I college boys basketball recruit in Minnesota. Now, in grades nine through 12, there are at least 60.

Successful big-time college coaches will tell you half the job is promoting and creating interest in the program.

When Musselman took the Nevada job, it paid $400,000. After selling out the arena for three years in Reno, the school raised his salary to $1 million. When Arkansas offered $2.5 million a year for five years with all sorts of attainable bonuses, Nevada countered with a 10-year offer of $2 million a year.

Why would Nevada be willing to go from $400,000 to $2 million? Simple: When you make the NCAA tournament three straight years and you sell out your building and your merchandise sales explode, financially it works.

Minnesota would have to figure out financially whether it’s worth investing mega-millions in Musselman or accepting mediocrity. What’s the cost to be ranked No. 8 in the country as is Arkansas?

Bottom line: Retaining Pitino two years ago got the Gophers what they deserved.

Dutcher, 61, considering his success at San Diego State, pedigree and strong local family background, and that he’s got just a $1 million buyout if he were to accept the Gophers job, seems the most practicable choice for a rebuild at Minnesota.

Dutcher has an undervalued contract of $1.18 million next season. His deal runs through 2025-26. He would at least double his salary at Minnesota. Meanwhile, don’t be surprised if San Diego State increases his deal to try to fend-off Minnesota.

Dutcher’s season ended Friday with a loss to Syracuse. He could meet with Coyle soon.

New Mexico isn’t getting just Pitino, but Carson Herron, the Minnetonka golfing star whose father, Tim of the PGA and Champions tours, was a three-time All-American for the Lobos.

Inver Grove Heights’ Sam Udovich, 14, an eighth-grader at St. Croix Lutheran, leaves Wednesday for Atlanta for a junior tournament before competing in the Drive, Chip and Putt national finals at famed Augusta National on April 4, just four days before the Masters, on the Golf Channel. Udovich’s drives are registering 300 yards on Trackman simulator technology.

Cretin-Derham Hall grad Ryan Harris, the former offensive lineman for the Super Bowl champion Broncos and a radio sports talk host in Denver, has been named Colorado’s Sportscaster of the Year.

Frannie Hottinger, who is Cretin-Derham Hall’s all-time basketball scoring leader, is leading scorer as a sophomore for Lehigh University, which is in the NCAA women’s tournament. Father Dave is a former St. Thomas Academy and University of St. Thomas football standout.

Look for Gophers athletics director Mark Coyle to request from Minnesota president Joan Gabel and the Board of Regents enough money to lure a proven coach to replace Richard Pitino.

A little birdie says Craig Smith, the Stephen, Minn., native who coached Utah State to the NCAA tournament and is considered a Gophers candidate, on Tuesday met with Utah. The Utes job is expected to pay between $2.75 million and $3.25 million a year.

Smith’s team lost to Texas Tech on Friday and he’s expected to be interviewed by Coyle soon.

Another coach, Loyola’s Porter Moser, believed to be on Minnesota’s list, is also involved with Indiana as well as Marquette. But there’s whispering that Greg McDermott may end up resigning at Creighton. That’s Moser’s alma mater and he would be on a short list there.

It could cost $2.75 million a year for the Gophers to get Anthony Grant out of Dayton, but he appears destined for Miami if that job opens. Least expensive for the cash-strapped Gophers would be Michigan assistant Howard Eisley, the ex-Timberwolves guard, for $1 million. Ex-Timberwolves coach Sam Mitchell is said to be willing to take $1.5 million for the job and has no buyout.

Mitchell is credited with helping recruit 7-1 James Wiseman, now of the Golden State Warriors, to Memphis.

Insiders say Grant is also in the hunt for the Marquette job made available on Friday with the firing on Steve Wojciechowski.

It’ll be interesting now whether 6-11 freshman Dawson Garcia from Prior Lake considers a transfer to the Gophers. Garcia led Marquette in scoring (13.0 points average) and rebounds (6.6). By the way, 6-9, 255-pound senior teammate Theo John from Champlin Park led in blocked shots (1.5 average).

Race Thompson, the 6-8 Armstrong grad who averaged 9.1 points and 6.2 rebounds playing out of position (power forward-center) at Indiana this season and who has two years of eligibility remaining, has a transfer option if he wants.

Dennis Gates, 41, working on a thin budget at Cleveland State, is an intriguing and more-than-affordable Gophers candidate and was the Horizon Conference’s coach of the year last season. The former Florida State assistant, making less than $400,000, has a buyout of $600,000 before April 1. He is expected to be interviewed but has just two years of head coaching experience.

Look for Mark Madsen, 45, the popular former Timberwolf who is head coach at Utah Valley, to get serious consideration if Mark Pope leaves Brigham Young for the Utah job. Madsen is expected to move up quickly in coaching circles and could end up at alma mater Stanford within the next five years.

Pitino, whose salary averaged $2.46 million at Minnesota, agreed to a six-year contract totaling $4.975 million in base salary with New Mexico. However, the Lobos did fly him from St. Paul to Albuquerque on Thursday in an elegant Falcon 2000 private jet, which is a better aircraft than he got at Minnesota. He’ll make just $775,000 in his first season, but that’s not bad for a 38-year-old.

In Albuquerque, he’ll get a courtesy car and country club membership. At Minnesota, Pitino made about $15 million during his eight seasons, an average of nearly $38,000 a week.

That was the New England Patriots’ Boeing 767 team jet, decorated with six Lombardi Trophies on its tail, parked at the Minneapolis-St. Paul airport on Friday.

Shaka Smart, the Texas coach rumored to be on Indiana’s candidate list, was among those who said no thanks to then-Gophers athletics director Norwood Teague, who subsequently offered Pitino the job nine years ago. Also declining were Flip Saunders after Teague insisted on naming Saunders’ assistants, and Buzz Williams, Fred Hoiberg and Mick Cronin.

By the way, Hopkins grad Paige Bueckers, the 5-11 UConn All-American freshman, is third in the nation in three-point shooting (49.43 percent).

With guard Marcus Carr transferring from the Gophers, seven-foot center Liam Robbins, who led the Big Ten in blocked shots (2.8 a game), might be the Gophers men’s basketball team’s top recruiting priority for next year.

Having QB Kirk Cousins back for next season means he’ll also be back for the 2022 season. That might make it difficult for owners Zygi and Mark Wilf to fire GM Rick Spielman and coach Mike Zimmer because their successors would be bound with Cousins for a season.

Bottom line: Spielman and Zimmer seem essentially locked in for the next two years.

It still looks like transferring Gophers basketball player Jarvis Omersa could end up at St. Thomas, but also as a football player.

It’ll be interesting whether the Wild’s Kirill Kaprizov, after playing professionally in Russia last season, gets legitimate consideration for NHL rookie of the year. Remember Wayne Gretzky, after tying for the NHL scoring title his rookie season (1979-80) with Edmonton, wasn’t considered a rookie because he played in the World Hockey Association the year before.

Buzz among hockey people is that ex-Gopher Grant Potulny of Northern Michigan will get top consideration for the University of St. Thomas Division I coaching job.

One college basketball coach, asked where transferring Gophers guard Marcus Carr might end up: “Wherever he wants.”

A Message from John Simon