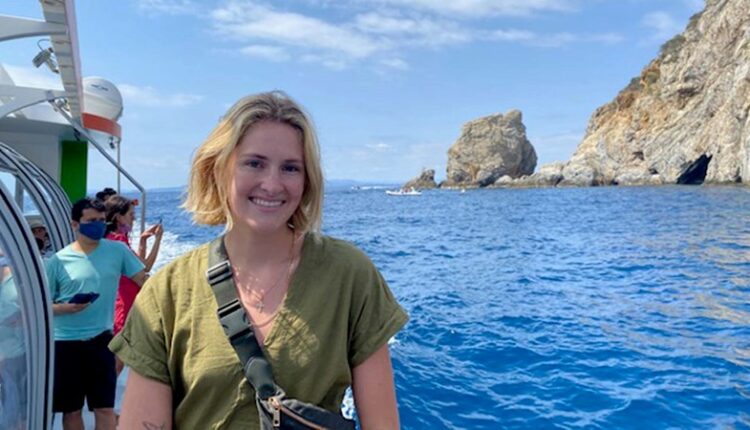 Embracing Challenges Without Fear of Failure

The importance of not being afraid of failure was emphasized over and over again throughout the experience. And it’s something that will pay off in many areas of your life.

“I didn’t know anyone on the trip,” said Hudson. “I was traveling alone and a lot of friends asked if I was scared. I don’t know why, but I wasn’t scared at all. I was just very excited.”

Hudson’s confidence grew from finding herself in awkward situations during her internship at Geeni, a company that uses renewable energy … especially solar.

“I’ve always played it safe,” said Hudson. “But there were times when my boss asked if I had already made the diagram. I hadn’t done it because I wasn’t sure what data to use. He said just do it and he told me if it was correct. “

Hudson’s first thought was … what if it’s wrong?

“He said it’s okay when it’s wrong. He wanted to see how I thought it through myself, then we could talk about it afterward.”

This thought process was different from what Hudson was used to.

“I’ve learned so much more when I show my boss a graph or calculation and he wants me to change it.”

What kind of work was “it” for Hudson?

“On a typical day, my main priority was putting together research on how green roofs – literally roofs with plants – benefit solar panels,” she said. “There’s been research and study on how solar panels can help green roofs, but there’s not much about the reverse relationship. I had to find confident and reputable experiments.” [on that topic], then I do my own calculations, form hypotheses, and test those hypotheses based on some empirical data.

“We then tried to calculate how much the service life of the solar modules and how much the electricity production had increased, put that together and presented it to my boss.”

One of Hudson’s first priorities after starting her internship was to get educated.

“One of the first things I did was learn about the software that is used to map the different energy communities,” she said. “Another big thing was reading Spanish energy legislation because it has changed a lot lately. We had to understand how the whole process works within the real community – within the law and the government – before we got away with some of the energy use. “

Since Hudson was only in Barcelona for six weeks, she was unable to conduct any experiments within that time frame.

The internship forced Hudson to think differently, which led to growth. The growth also came because she was all alone in another country.

Hudson had visited Barcelona in the past and was thrilled, which piqued her interest in returning for an internship. “Last summer I was supposed to be studying abroad with Lehigh in Ireland, but COVID-19 apparently resulted in it being canceled,” Hudson said. “This summer I focused a lot more on an internship because I really wanted to have work experience. I wanted to prove my engineering skills.

“I sat down in my father’s office one day and Googled ‘environmental engineering internships abroad’,” she continued. “The CIS Abroad program popped up, which resulted in my placement with Geeni. At first it seemed too good to be true – my major and my favorite city.

“I just wanted work experience, so I told her if it’s something different or more civil engineering, that’s fine,” said Hudson. “After my interviews, I had to choose between two different companies.

“I’m really glad I went with Geeni,” she continued. “In the end, it was exactly what I want to do (for a career) that I didn’t expect.”

Hudson has always been fascinated by sustainable and renewable energy.

“This has helped solidify the fact that I want to get into sustainable energy and technology,” she said. “I am currently considering studying in Spain.”

While Hudson’s exact career goals became clearer through her internship experience, her extra confidence and fear of failure can take her with her into the coming volleyball season.

“Personally, the most struggling in volleyball was the fear of failure,” said Hudson. “I feel like a very consistent, trustworthy player. I can hold the ball, I can hold my serve and I can perform. But I’m not afraid to hit the ball as hard as possible.” Sometimes I can. It can hit the back wall every now and then, but you won’t get better until you do. “ It’s a message that coaches have repeated many times.

“Ultimately, what you learn most is when you fail,” said Hudson. “If I had never tried anything new and someone was telling me what to do all the time, I wouldn’t learn so much. That’s why I’m going to do it, and you’ll end up learning so much.”

Speaking of learning, Hudson probably learned the most by simply immersing himself in a different culture.

“I was the English-speaking American in a Spanish office so the language barrier made it a little difficult at times,” said Hudson, whose last Spanish class was four years earlier. “I really had to think about how I would phrase my questions. When I was explaining something, I had to understand it well enough to be able to explain it much more easily.”

Hudson spoke some English to those who spoke the language, but as she said, “I wanted to make sure I didn’t get in there and expect everyone to speak English because it wasn’t supposed to be Spanish, but they speak in Barcelona too Catalan. That was interesting because some words sound a lot like Spanish and I wouldn’t quite hear them when I switched. “

One of the big topics discussed in Hudson’s internship course (as part of her six-week stay abroad) was how to deal with cultural differences.

“If you are able to travel I don’t see why you shouldn’t because I think it’s one of the most enriching experiences,” she said.

The experience would not have been possible without Hudson’s willingness to take a risk (by going abroad alone) and not be afraid of failure.

“There were a lot of little things that I could have allowed that I didn’t enjoy my experience as much, but I’ve been to Spain, learned so much, improved my Spanish and met some of my best friends,” she said.

“Having a growth mindset all along has really helped and taught me a lot that I will take with me for years to come.”

In Lebanon, Discontent Grows With Hezbollah’s Political, Military Might | Voice of America