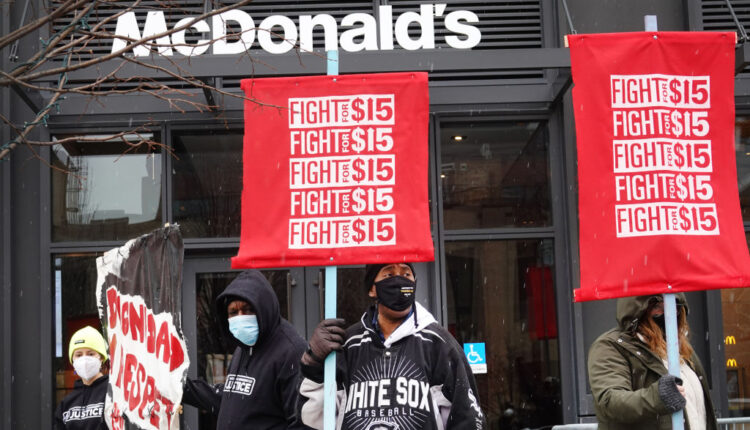 As Pennsylvania — and the rest of the nation — gets ready to celebrate the American worker this Labor Day weekend, too many people are still being left behind as the United States slowly emerges from the pandemic recession.

That’s the bottom line finding of the latest annual survey of the state of working Pennsylvania, put together by the Keystone Research Center, a progressive think-tank in Harrisburg that has been taking the pulse of the commonwealth’s workers for the last quarter-century.

“The United States and Pennsylvania economies are at a pivot point—will we build forward better or will we build back the same or even worse? A glass half full person might interpret the data as evidence we are on a promising path,” the document reads. “A glass half empty person might see us on an unpromising path. But the reality is, the path we will take still depends on policy over the next months and years.”

Below, a look at some of the report’s key findings, and its prescriptions for action.

While it’s come down, Pennsylvania’s unemployment rate still exceeds the national average, researchers noted Wednesday. And the state is still down 360,000 jobs, with the largest losses among low-wage jobs (Those earning less than $27,000 a year). 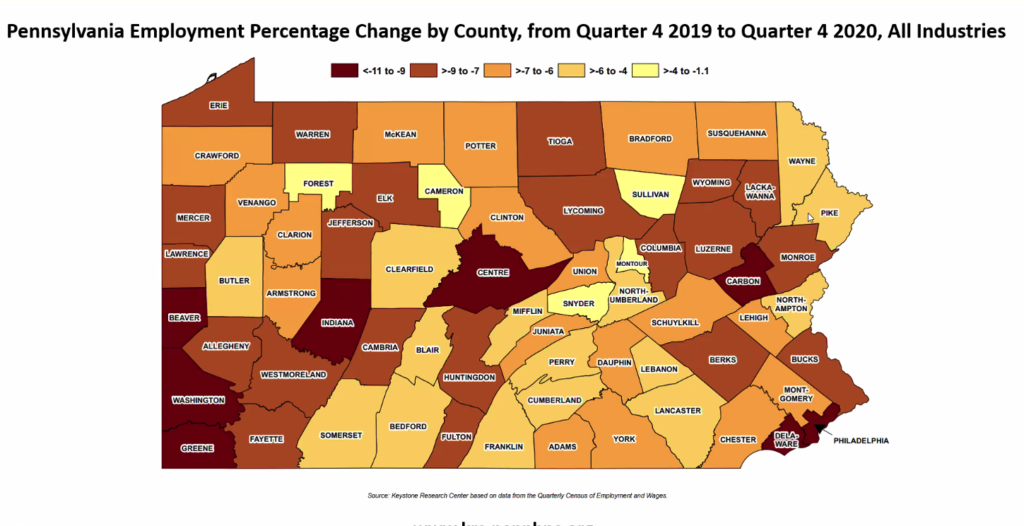 Employment among those workers dropped 40 percent during the first two months of the pandemic, and remains down by nearly 20 percent some 18 months later. Women and people of color have been disproportionately impacted, the research found. 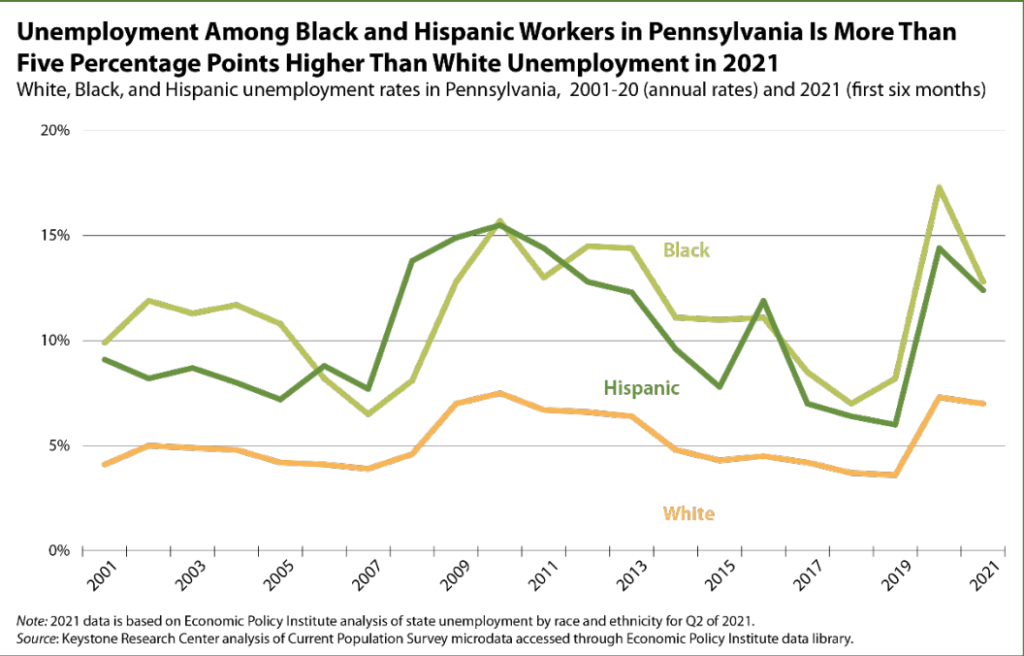 Six Pennsylvania counties: Adams, Allegheny, Armstrong, Beaver, Bedford, and Berks counties, charted the largest drops in leisure and hospitality employment between the end of 2019 and the end of 2020, the report showed.

Adams County is the home of the Gettysburg National Military Park, a major tourism hub. 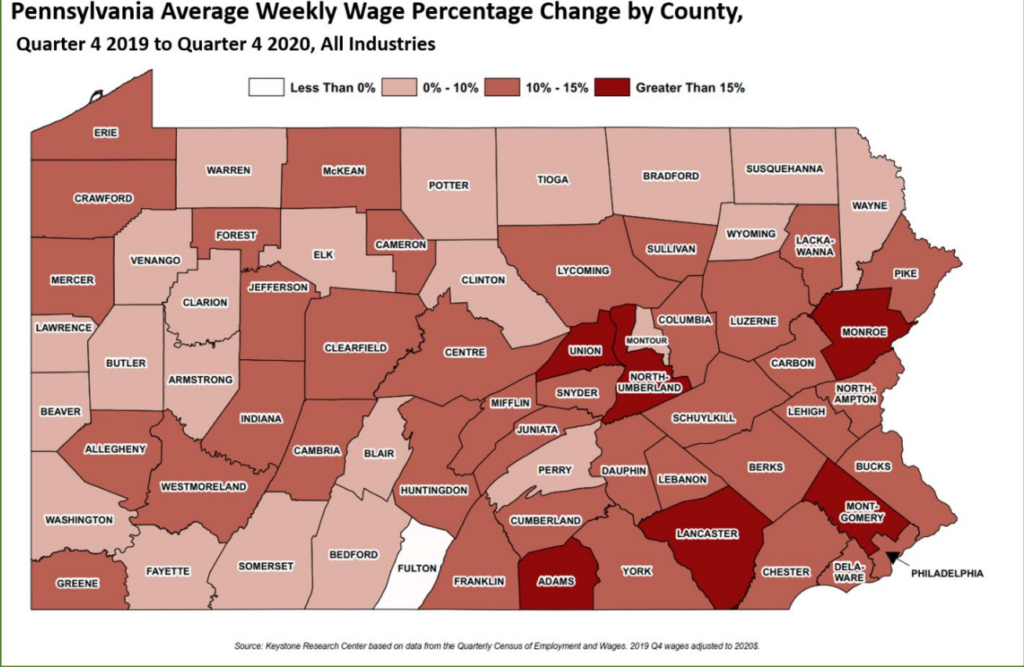 And while wage growth in 2020 appears to have been robust, the report argues that growth is largely a statistical illusion because “the wages of the jobs and people still employed are higher at every place in the distribution (10th percentile, median, 90th percentile, etc.), even though those individuals may not have seen a wage increase.”

The report recommends an aggressive course of action by state and federal policymakers that includes raising the federal minimum wage from the current $7.25 an hour (Pennsylvania’s minimum wage is the same as the federal wage) and passing the remaining components of President Joe Biden’s sweeping domestic policy agenda.

“Don’t quit while you’re ahead,” Stephen Herzenberg, the think-tank’s executive director, said during a Wednesday press call, as he looked to history for a lesson.”[President Franklin D. Roosevelt] took his foot off the gas in 1937 and unemployment rose.”

The report further exhorts Pennsylvania lawmakers to tap the $5 billion in federal stimulus money they socked away as part of the 2021-22 state budget on programs that would improve the lives of state residents.

Pennsylvania’s Republican-controlled General Assembly, which spent only $2 billion of the $7 billion in state-level relief included in the American Rescue Plan, need to “quit while they’re behind,” Herzenberg said Wednesday.

“Use a different policy. Get in line with the federal government and help strengthen the recovery,” he said.

Our Stuff.
Electricity generators will have to pay for the carbon they release into the atmosphere after the state’s regulatory review board approved Pennsylvania’s entrance into an interstate initiative to address climate change. Stephen Caruso has the story.

One day after Republicans who control the state Legislature railed against a new statewide mask mandate in K-12 schools and childcare centers, a group of GOP lawmakers are again eyeing the constitutional amendment process to limit the authority of the state’s top health official, Marley Parish reports.

A Texas law that would ban most abortions after six weeks of pregnancy — before most people even know they’re pregnant — took effect Wednesday after the U.S. Supreme Court declined an emergency request to stop it. Cassie Miller rounds up reactions from Pennsylvania’s political community.

Critical race theory protests in Pittsburgh-area schools have ties to GOP organizing and right-wing media, our partners at Pittsburgh City Paper report in an in-depth investigation.

On our Commentary Page this morning, a University of Texas expert explains how state efforts to ban school mask mandates mirrors resistance to integration. And opinion regular Bruce Ledewitz has a few problems with the national popular vote movement.

Elsewhere.
Under a new contract, Philly’s teachers, counselors, nurses, and other support staff would see their pay rise by 9 percent over three years, the Inquirer reports.

Just days into the new school year, hundreds of Pittsburgh-area students are in COVID-19 quarantine, the Post-Gazette reports.

The Hanover Area schools in Luzerne County have canceled classes this Thursday morning over flooding, the Citizens’ Voice reports.

The Morning Call takes a look at the legislative fallout over Gov. Tom Wolf’s mask mandate for Pennsylvania students.

U.S. Sen. Bob Casey, D-Pa., is standing with the Biden administration over its actions in Afghanistan, the York Daily Record reports (paywall).

New expense records posted online by the Pennsylvania state Senate is not searchable or easy to analyze, Spotlight PA reports (via WITF-FM). 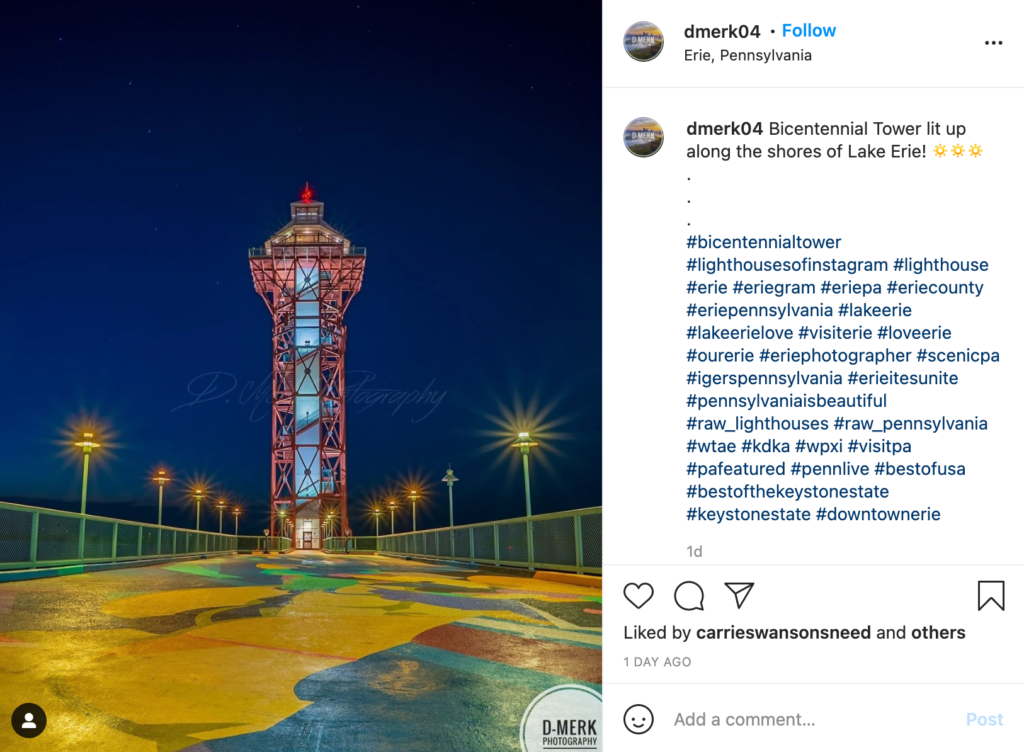 You Say It’s Your Birthday Dept.
Have a birthday — your own, or someone else’s — that you’d like to see celebrated in this space? Drop me a line on [email protected].

Thursday’s Gratuitous Soccer Link
The Womens’ Super League has returned for a new season ‘with its sights set on a big breakthrough,‘ the Guardian reports.