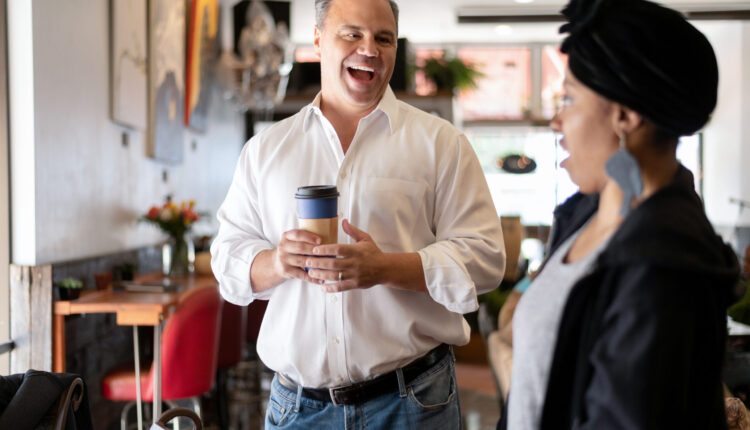 Editor’s note: It’s still 2021, but the 2022 field for Pennsylvania governor is starting to develop. The Capital-Star is trying to sit down with as many candidates as possible to ask them about their campaigns, background, and issues impacting Pennsylvanians.

Feel free to email [email protected] with any questions you’d like to see posed to candidates in the future.

Jason Richey is a 49-year-old attorney with K&L Gates in Pittsburgh. A Beaver County native from Aliquippa borough, this is his first run for public office.

Despite being a newcomer to state politics, Richey has argued he’s the candidate most likely to win — the four elected Republican governors since 1966 have hailed from western Pennsylvania.

His campaign website offers a 12-point “Contract with Pennsylvanians,” covering everything from manufacturing and transportation to policing and election law.

Capital-Star: Why are you running for governor? You know, you haven’t been in elected office before, this is your first run. So why start with governor, and why should you be Pennsylvania’s next governor?

Jason Richey: Because Pennsylvania has been on a 50-year decline. And we need someone that’s not a politician. We need an outsider to come in and shake up the way things are, and look at things in a new way, so that we can start to bring population back, and bring growth back to the Commonwealth.

C-S: How do you see your lack of experience in public office? Do you see it as an asset or do people ask you questions about that?

JR: It’s a complete asset. I’m an expert on government. I’ve been a lawyer for 26 years at one of the largest law firms, and I deal with energy, construction, [and] infrastructure, as well as doing bid protest, which is finding corruption and government procurement. So I am an expert, more than qualified, and ready to lead. But I do think we need a fresh vision for this state.

C-S: You’ve put a very broad plan on your website of policies that you hope to enact. One of the things that really sticks out is a 0% income tax. Why do you think that’s the right policy for Pennsylvania?

JR: I know it is. Number one, we’ve seen states like Delaware, Tennessee, Texas, Florida — when they implement this, they boom. Tennessee is a great example. Nashville was a rundown city, and they slowly over time got [the income tax rate to] zero.

And that’s something that people want and businesses want. Because all an income tax does is penalize people for working. And you should never do that when people have the courage to open a small business, or to get off their butt and go out and work. We want to reward that … The zero percent [income tax rate] will be a catalyst to bring new people here to bring new businesses here, and to help unleash the power of Pennsylvania.

C-S: A lot of plans have called for raising sales tax and income tax to be able to eliminate or reduce property taxes. I bring this up because that is something that there’s been a lot of activism on in the state. There’s a hearing on this in Lebanon [County] from state legislators within the next two weeks. So do you see a way to tackle property taxes in a plan that reduces to zero income taxes?

So first of all, I want to say that Republicans have been promising this elimination or significant reduction of property taxes for a long time. And it hasn’t happened. Because there are different constituencies throughout the Commonwealth …

…The root of the problem is we have 2,463 municipalities — which is the third-most in the country — and 500 school districts. So where it’s appropriate, we want to incentivize local government into getting economies of scale. That could mean regional police [or emergency medical services].

Also we want to — I want to stress the word for all of your readers, the word voluntary — we need to provide incentives for inefficient localities or schools that may be half-empty, to consider voluntarily consolidating with a neighbor. Because we just aren’t getting enough economies of scale out of our local government school district.

If we do these things —  this is completely separate from the income tax — the income tax can come down to zero. At the same time, we can be smarter about how we do local government. And the state has to be a leader, and the governor has to be a leader, on encouraging more economies of scale. And by doing that, we’ll get to the root cause of property tax, and we can reduce the property tax without increasing any other taxes.

C-S: So basically, you see the property tax issue as a systemic problem of a large amount of local governments in Pennsylvania, that sometimes duplicate each other’s work, and that if there is some consolidation of government, there is a smaller government, there isn’t the need to address [property taxes] with state tax changes, it can just be solved on a local level?

JR: The root cause of a lot of Pennsylvania’s problems, state and local, is we have too much government. And a lot of people don’t understand why.

The reason is our state constitution was significantly rewritten in 1870. And at that time, we were the second-most populous state. We had money flying out of all 67 counties. And there wasn’t much competition …

We’ve got a shrink the size of our government so that Pennsylvania is a lean, mean fighting machine. We can bring our taxes down, real estate and income tax, so that our citizens and businesses that come here can compete and we can become an economic power in the United States.

C-S: You’re [campaign website] mentioned hyperloop [a futuristic transportation system using vacuum tubes that’s still being tested]. I bring it up because there’s communities in western Pa. — Altoona, Johnstown — that are just like, “give us an extra Amtrak train.” That’s what they want. And hyperloop, you know, is an idea. It’s a concept that seems very cool, but has not really been implemented anywhere. So why hyperloop?

JR: I am for high-speed rail … communities like Altoona and Johnstown, they are great examples. And the same thing on the eastern side of the state, [such as] Reading.

If they can have quick 30-minute access to the Pittsburgh International Airport or the Philadelphia International Airport, we’re going to breathe considerable life into those communities. And the fact of the matter is, as you’ve seen around the world, [high speed rail] is the future. Whether it be China, the [European Union], they’re investing in high-speed rail as a way to connect.

And so if we want to be competitive in the 21st century, and we want the entire Commonwealth — not just Pittsburgh and Philadelphia — to be successful, I believe high speed rail is absolutely necessary. And these are these are projects that take a long time to plan out, develop and implement. But we need a governor who has the foresight to start planning Pennsylvania for the future.

The reason I mentioned hyperloop is because it is the latest, greatest technology that’s out there. From all indications, they’re getting ready to come online. I’ve talked with some of the top people, for instance, at [the British-founded conglomerate] Virgin Hyperloop about their development. And I think that when I become governor, if that technology is ready to go … the type of high speed rail we may want to choose might be hyperloop … It is a concept, it is an idea and it’s something that I think is worth exploring.

JR: Well, I would repeal Act 77, No.1.. And [pass] a voter ID [law]. Those two things. If you do those two things, you’re going to bring integrity back. We had integrity prior to Act 77. And I believe voter ID is a necessity for integrity.

C-S: With Act 77, is it your  opposition to mail-in ballots or just the way mail-in ballots were done in Pennsylvania? Like, if the General Assembly took up a constitutional amendment to okay the mail-in ballots that looked like Act 77? Would you be supportive of that? Or are you just opposed to the general concept of mail-in ballots?

JR: I am against the public policy of it. There’s a concept called ballot harvesting. Ballot harvesting is when someone can go into an apartment and say, “Did you fill out your form for a mail-in ballot?” No. “I’ll fill that form out for you.”

And then when the ballot comes and it’s sitting there on their desk, “Did you fill out your ballot?” No. “Let me help you with that.” And they can put pressure, or even fill out the ballot for someone else to vote and that’s how you harvest. That’s why it’s called harvesting — harvesting ballots.

[Editor’s note: Ballot harvesting is illegal in most cases in Pennsylvania. Only people with disabilities can designate another individual to return their ballot.]

Our Constitution requires people to vote in a poll booth. And the reason for that is when you’re in that poll, and you’re in that booth, nobody knows who you’re voting for. There’s no pressure, you can vote for whoever you want. So I want to make it easy to vote. I want it to be as easy as possible for people to vote. I’ve called for a statewide holiday so that everyone has access to the polls, because that’s critical. I think we should do better on that. But at the same time, we want to make it hard to cheat.

C-S: My understanding is that you were scheduled to be at an event in Pittsburgh with a group called the Iron City Citizens Response Unit. Also, Audit the Vote PA. They’re a group that claims there’s been a lot of fraud in Pennsylvania’s 2020 election. My understanding is you’ve backed out of that event. Is that accurate? And if so, why?

JR: I was just asked to speak at an event in Pittsburgh. And then when I saw the flyer that came out, and we vetted it, we didn’t think it was an appropriate event, so we withdrew.

C-S: Why was it not appropriate?

JR: Some of the individuals that were going to be at that event stand for principles that are disgusting. And I don’t want to be even associated with it or breathe the same air that they breathe. So we’re very picky. As governor of Pennsylvania, I need to be the leader of all people. And I didn’t want to have anything to do with that.

JR: That’s the purpose of the audit, is that we need to see what happened.