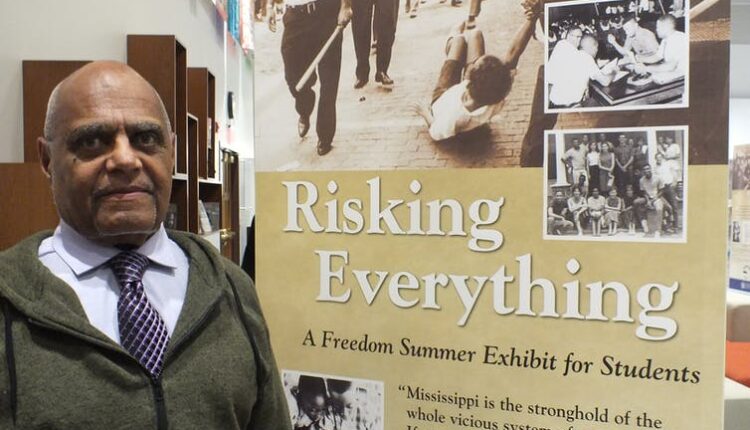 By Hasan Kwame Jeffries
As an organizer for the Student Nonviolent Coordinating Committee during the 1960s, Bob Moses traveled to the most dangerous parts of Mississippi to help African Americans end segregation and secure the right to vote. But it would be tutoring students in math 20 years later at his daughter’s racially mixed middle school in Massachusetts that would lead to his life’s work – The Algebra Project.

The Algebra Project is a nonprofit dedicated to helping students from historically marginalized communities develop math literacy, which is an individual’s ability to formulate, employ and interpret mathematics in a variety of contexts. Moses founded it in 1982.

After researching Moses’ role in the civil rights movement for my book – “Bloody Lowndes: Civil Rights and Black Power in Alabama’s Black Belt” – and later interviewing him for various projects about SNCC, it became abundantly clear that The Algebra Project sprang directly from his civil rights work in Mississippi. That work helped transform Mississippi from a segregationist stronghold into a focal point of the civil rights revolution.

In his book “Radical Equations,” Moses recalls that in 1982 he was surprised to discover that his daughter, Maisha, who was entering the eighth grade at the Dr. Martin Luther King, Jr. School in Cambridge, Massachusetts, would not be taught algebra because the school did not offer it. Without knowledge of algebra, she could not qualify for honors math and science classes in high school.

As explained in his book, Moses had a background in mathematics. In 1957, before joining the civil rights movement, he earned a master’s degree in philosophy at Harvard University and then taught middle school math for a few years in the Bronx, New York, at Horace Mann School, a prestigious private school just north of where he grew up in Harlem. And from 1969 to 1976, he taught algebra in Tanzania before returning stateside to work on a doctorate in the philosophy of math.

Moses asked Maisha’s teacher if he could provide his daughter with supplemental math lessons in class since Maisha refused to be tutored at home – she opposed doing what she called “two maths.” The teacher consented, but on the condition that Moses instruct some of Maisha’s classmates as well, according to his book.

Moses agreed. Like the teacher, he believed that all children, including those from historically marginalized communities, deserved a chance to take advanced math and science classes in high school.

At the end of the school year, Maisha and the three students who studied with her passed the citywide algebra exam. They were the first from their school to do so, according to his book.

Excited by this success, Maisha’s teacher asked Moses to work his math magic with more students.

But it wasn’t magic.

Moses succeeded in teaching algebra to the students who were frequently tracked into less rigorous classes and courses of study because he believed that Black, brown, working-class and poor children could master algebra – or other advanced classes – even at an early age.

He also knew that these same students would be eager to study math if instruction revolved around their lived experiences. Rote memorization would not work; content had to be relatable.

Moses agreed to teach the incoming eighth graders, even though none of his children were in the class. “I was beginning to think I had found my work,” he wrote in “Radical Equations.” And his work was teaching math literacy in the emerging digital age.

Math literacy for African American children was an essential aspect of Moses’ philosophy and work (Ariel Skelley/DigitalVision via Getty Images).

Key to a better life

Moses believed that math proficiency was a gateway to equality in a post-industrial society. He explained in 2007: “In our society, algebra is the place where we ask students to master a quantitative literacy requirement. And so hence, algebra becomes available as an organizing tool now for educational rights and for economic rights.” In other words, math literacy would provide access to the kinds of computer-driven careers that would enable African Americans, and other historically marginalized youth, to permanently improve their life circumstances and the social and economic conditions of their communities.

Moses believed that math proficiency was a gateway to equality in a post-industrial society.

Reaching more youth, however, required a dramatic shift in the culture of learning at the school. Expectations regarding when young children from marginalized groups should study algebra had to change, which was no small task considering many children weren’t expected to study algebra at all.

Just as he once organized sharecroppers, he began organizing parents.

In the civil rights movement, Moses routinely deferred to the wishes and desires of the people he was organizing, so much so that he left the movement in 1965 when he felt people were turning to him too often for solutions to their problems. This was the approach of his mentor, veteran activist and SNCC adviser Ella Baker, who led by asking questions, rather than by providing answers.

The parents were shocked and somewhat embarrassed by the survey results, leading to a consensus for allowing any seventh or eighth grader to take algebra.

Only two years after Moses’ daughter passed the citywide exam, the King school offered algebra to students in the seventh and eighth grades, and even provided Saturday classes for parents.

Today, The Algebra Project is fighting to ensure students receive the quality math education they deserve by supporting learning cohorts in dozens of schools across the country where students have historically performed poorly in math on eighth grade state tests. The impact of the project at Mansfield Senior High School in Mansfield, Ohio, is illustrative. In the eighth grade, the math proficiency of The Algebra Project cohort was 17%. By the 10th grade, that number had risen to 82%.

Ella Baker was fond of saying, “Give light and people will find the way.” Few did that better than Bob Moses, who died on July 25, 2021.

Hasan Kwame Jeffries is an associate history professor at Ohio State University. He wrote this piece for The Conversation, where it first appeared.