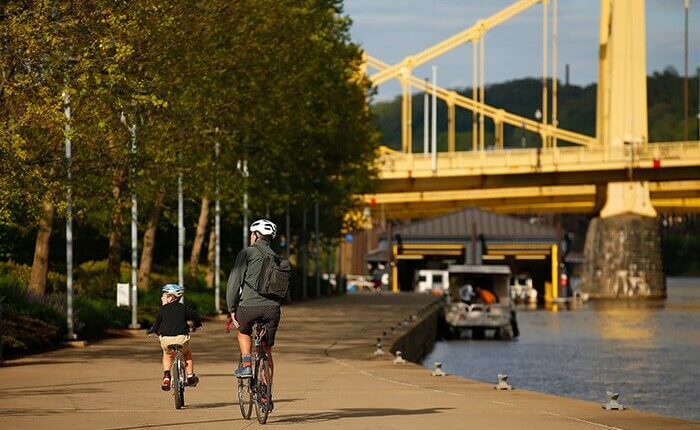 PITTSBURGH — After some confusion about Pittsburgh’s policy over e-bikes, the Port Authority of Allegheny County has announced a pilot program to allow the electric-assist bikes on light-rail cars and the Monongahela Incline, beginning Wednesday.

E-bikes, which are the size of pedal-powered bikes but contain a small electric engine to boost riders, have always been permitted on the front racks attached to Port Authority buses. Port Authority now joins several other public transit agencies across the country in permitting e-bikes on transit vehicles.

In an interview with Pittsburgh City Paper, Port Authority CEO Katherine Kelleman said the updated policy allows for e-bikes on all light-rail cars south of Downtown Pittsburgh’s First Avenue Station (aka all stations outside of Downtown and the North Side) in perpetuity, as well as a six-month pilot program allowing e-bikes on light-rail cars north of First Avenue Station and on the Monongahela Incline.

This pilot policy does not apply to the Duquesne Incline, which is run by a private company, not the Port Authority. Gas-power bikes or other gas-powered vehicles are still prohibited on Port Authority vehicles.

Kelleman is a supporter of e-bikes and said they can be a real solution to Pittsburgh’s multimodal mobility aspirations.

The pilot program part of the e-bike policy is to allow the authority to test out e-bikes on transit vehicles traveling through confined areas that don’t allow for easy exits, such as light-rail cars traveling through underground tunnels or up a hillside on the incline, she said.

“We can live with e-bikes south of First Avenue,” Kelleman said. “But in the tunnels and the incline, there is still some heartburn.”

The Port Authority’s announcement comes after riders were left uncertain over the authority’s policy for e-bikes.

In July, the agency tweeted that e-bikes were allowed anywhere on transit vehicles that allowed regular bikes. But last week, the authority apparently reversed course to say that e-bikes were not allowed on light-rail cars and the Incline, citing concerns over lithium-ion batteries catching fire. (On rare occasions, e-bike batteries have caught on fire.) The August announcement said the original July policy was communicated in error.

Advocacy group Bike Pittsburgh then sent a letter to the Port Authority, asking them to reconsider the e-bike ban. Bike Pittsburgh Director Scott Bricker said the group is happy to see e-bikes will be allowed on transit.

“We’re grateful that the Port Authority heard us, took a step back, and then took a reasoned approach to this policy,” Bricker said. “Allowing e-bikes onboard will be especially helpful for residents in our hilly neighborhoods to better connect to transit and get where they need to go without needing to use a car.”

If no incidents occur during the six-month pilot, Port Authority will allow e-bikes on all light-rail cars and the Monongahela Incline permanently.

One e-bike rider who will benefit from this policy is South Hills resident Ernest Jackson. He is retired and rides his e-bike two miles from his home to Library Station about twice a week, where he takes light-rail into Pittsburgh to visit his brother on the North Side or shop in the Strip District.

Jackson said having e-bikes on transit fits in line with Pittsburgh and Port Authority’s goals of multimodal transit, where people use different non-car mobility options to get around.

He says that allowing e-bikes on public transit is also important for attracting the growing number of e-bike riders in Pittsburgh to ditch their cars and ride public transit instead.

“If Pittsburgh wants to be attractive to the community that is growing, they are kicking them in the ankle as far as not allowing e-bikes on transit,” Jackson said.

Aaron Stein, co-founder of Kindred Cycles in the Strip District, agrees, and says his bike shop has seen a large increase in e-bike sales over the last year.

“It has continually become a bigger part of business and grown to be 30% of our bike sales in dollars sold,” Stein said.

Stein has also heard about the rare problem of e-bike batteries catching fire, but says he has never experienced this himself or received a customer complaint. He says stories about batteries igniting are usually related to people vandalizing the engines, or bikes that are charging or are overcharged. (There are some instances of idle e-bike batteries igniting, but that is more rare.)

Kelleman said her agency spoke to other transit agencies about how to approach the e-bike policy. Transit agencies in Los Angeles, New Jersey, and other cities allow e-bikes onto light-rail and other transit vehicles. She understands that people are not going to be charging e-bikes while on board, so she says it’s worth a pilot to test out how they work on transit.

She is grateful to be able to work with partners like Bike Pittsburgh on the pilot, and says it fits into Port Authority’s goals to get more people to ride transit, and less people to use cars in Allegheny County.

“I really appreciated the opportunity to get this right. These are a game changer for our topography,” Kelleman said, referring to  e-bikes’ ability to climb hills. “An e-bike can totally connect you to [many of Pittsburgh’s] walkable neighborhoods. Freedom is not having to own a car, and we want to be supportive of those other options.”