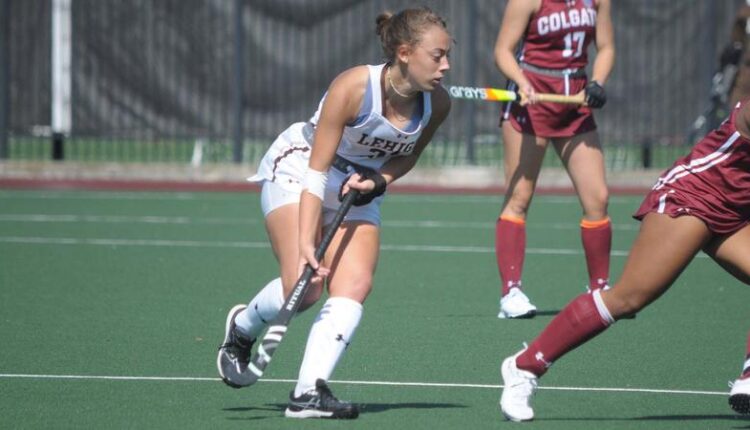 NEW HAVEN, Conn. – Senior Sarah Bonthuis scored two goals and added two assists as Lehigh completed his weekend trip to New England with a 5-1 victory over Sacred Heart Sunday at Yale’s Johnson Field. Juniors Abbie Brown and Julia Gatelein and first-year Maddie Kandra also scored for the Mountain Hawks, who established a season-high for goals and improved to 3-5 on the season.

“We failed to execute our game plan yesterday,” Lehigh head coach Caitlin Dallmeyer said. “We spent the evening discussing the work that needed to happen to see the results we wanted.

“We made adjustments to our lineup and moved Kiki Mes into a center midfield role,” Dallmeyer continued. “As a developing first-year she is getting better with every game and earned herself a spot in the middle of the field. This change allowed us to move Sarah into the attack line, which allowed us to generate more shots in the circle.”

The Mountain Hawks scored twice in the first quarter and added a goal in each subsequent period.

Nearly seven minutes in, Kandra was upended by Sacred Heart goalkeeper Samantha Maresca in the circle. A penalty stroke was awarded to Lehigh and Bonthuis converted for her fifth of the season to put the Mountain Hawks in front.

Just over three minutes later, Bonthuis set up Brown in front, with Brown scoring her fourth goal in as many games to give Lehigh a 2-0 lead after one quarter.

Gatelein got into the act in the second quarter, tipping home a pass from senior MJ Schwab to give Lehigh a 3-0 advantage. Emma Brayford then scored for Sacred Heart (0-6) to cut the Mountain Hawks’ lead to 3-1 after 30 minutes.

Bonthuis netted her second of the day and sixth of the season in the 40th minute, and later set up Kandra who scored her third goal of the season, with just over eight minutes remaining in the game.

“Overall the changes helped but the commitment from the entire team to execute the game plan is what won us the game,” Dallmeyer said. “We have more lessons to learn this season but I’m glad we made adjustments from our loss at BU and can now better understand the commitment to do the work needed to win games.”

Lehigh finished with a 17-6 advantage in shots and a 9-3 edge in shots on goal. Bonthuis had a game-high eight shots, including four on cage. The Mountain Hawks also had eight corners to the Pioneers’ six.

The Mountain Hawks are back at Ulrich Field next weekend to host Merrimack on Saturday and LIU on Sunday. Action both days begins at noon.