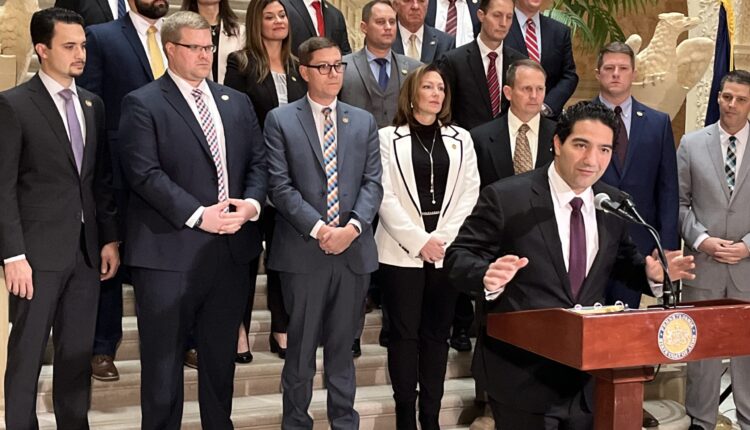 The Republican author of a constitutional amendment to provide legal relief for survivors of childhood sexual abuse called on House GOP leaders on Monday to allow voters to consider the measure by itself in the May primary election.

Speaking against a backdrop of partisan gridlock in the state House, Rep. Jim Gregory, R-Blair, shared details of his own abuse by two older boys when he was 10 years old and of his brother’s death of a drug overdose after confiding with a sister that he had been abused by an adult family friend.

“I’m here to speak for those who can’t or just haven’t had the support or belief that they could speak for themselves. I speak because God blessed me with an opportunity to speak as a legislator and someone who not only survived but is thriving today,” Gregory said, asking members of the House Republican Policy Committee to support his amendment as a standalone bill instead of bundling it with unrelated proposals.

But 20 days into the House’s new session, a vote on anything in the lower chamber appeared increasingly distant. With the lower chamber unable to function, the state Senate approved Gregory’s amendment as part of a package earlier this month and adjourned until late February.

With House Democrats and Republicans unable to agree on rules for a special session to vote on the amendment, Speaker Mark Rozzi, D-Berks, announced he was embarking on a statewide listening tour to gather input on how to break the impasse. The first session is set for 6 p.m. Wednesday at Carnegie Mellon University in Pittsburgh with another session Friday evening in Philadelphia.

Republicans, meanwhile, said the lack of action in the House is the result of Democrats being unwilling to work.

In addition to Gregory’s testimony, the policy committee on Monday heard testimony from Madeline Malisa, a senior fellow at the Foundation for Government Accountability, and Ohio Secretary of State Frank LaRose, who testified in support of a proposed amendment to require voters to show a government identification card at the polls.

The committee also heard testimony from David Taylor, president and CEO of the Pennsylvania Manufacturers Association, and Grant Gulibon, an environmental specialist at the Pennsylvania Farm Bureau, who described state regulatory agencies as an unaccountable fourth branch of government. They testified on a proposed amendment giving  the General Assembly power to veto state regulations if it was necessary to restore the balance of power between branches of government.

The House Democratic Caucus said in a statement that its members are at work in their districts setting up offices and serving constituents while its policy committee is also holding meetings in Harrisburg.

“Republicans ran the House for 12 years, with little to show for it. House Democrats believe in doing things the right way, including taking measures to ensure the House operates fairly for the next 23 months, but when our leaders sought to negotiate House rules and work in special session to help the survivors of child sex abuse, Republicans declined,” the statement reads.

House Democrats said they oppose bundling the sexual abuse survivors’ amendment and remain committed to passing it with no strings attached.

“It is shameful to make that commitment contingent on partisan policy agendas because survivors have waited too long for justice,” the statement reads.

In his remarks, Gregory said he wholeheartedly supports the voter identification and regulatory veto amendments but urged lawmakers to think of the faces of survivors, like the photos he shared with the committee of himself and his late brother as children, and allow the amendment to appear on the ballot by itself.

The amendment would create a two-year suspension of the statute of limitations on civil lawsuits over childhood sexual abuse. The General Assembly passed legislation in 2019 extending the deadline to file abuse lawsuits from age 30 to 55, but it is not retroactive. That means people whose claims were too old when the change was passed still cannot sue.

Gregory’s amendment would create a two-year window in which those people could sue people and institutions they claim are responsible for their abuse.

The amendment has followed a tortured path toward approval by voters in a constitutionally required referendum. The amendment was approved by both chambers in consecutive sessions and was headed for the ballot in 2021 when a procedural error by the Department of State sent the effort back to square one.

Although Republican lawmakers agreed to prioritize the amendment this session, they also are are pushing for the statute of limitations amendment to be packaged with the amendments on voter identification requirements and regulatory review by the general assembly. Gregory has said he fears voter confusion over the three amendments could cause the survivors’ amendment to fail.

The Republican-controlled Senate voted 28-21 earlier this month to send Senate Bill 1, containing language for all three amendments, to the House for consideration.

Democrats, except for Sen. Lisa Boscola, D-Northampton, opposed packaging the proposed constitutional changes into one bill, accusing Republicans of using survivors of childhood sexual abuse to advance the GOP agenda. The minority party unsuccessfully attempted to appeal a decision from Senate President Pro Tempore Kim Ward, R-Westmoreland, to divide the proposals into individual bills and table the amendment package.

But just as voters would decide how to vote on each proposal included in the amendment package individually — if the questions make it to the ballot — Democrats wanted to do the same.

They also said that the amendment package would violate Pennsylvania’s single-subject rule for legislation, which stops lawmakers from grouping multiple unrelated subjects into one bill. A constitutional amendment proposing a bill of rights for crime victims, which voters approved in 2019, was ruled unconstitutional by the state Supreme Court in 2021 for this very reason.

Democrats in the upper chamber argued that stricter voter identification requirements could disenfranchise people of color, seniors, and those with disabilities from voting. The voter identification amendment would also require enabling legislation, leaving some lawmakers with outstanding procedural questions.

Senate Majority Leader Joe Pittman, R-Indiana, noted in his floor remarks that three ballot questions — two about the executive branch’s emergency powers and one prohibiting discrimination based on race and ethnicity — appeared on the May 2021 primary ballot. Voters approved the proposed amendments, which passed the General Assembly in one bill before putting it forth to voters.

Pittman identified the statute of limitations as an important issue, “but it is not the only issue.”

“While I cannot predict the future, I believe that this will be — this should be, this must be — the final time that the Senate of Pennsylvania addresses this matter,” he said. “There is no reason for the House of Representatives to reject Senate Bill 1 — unless whoever is running the House of Representatives seems to think there’s a political reason that two of the three questions should not be put before the voters.”

Sen. Doug Mastriano, R-Franklin, said during a Jan. 11 interview on a conservative radio show that Senate Republicans “absolutely will be the firewall for Pennsylvania” to block the statute of limitations proposal if the voter identification and regulatory amendments do not move forward.

What voters need to know ahead of the Feb. 7 Special Election