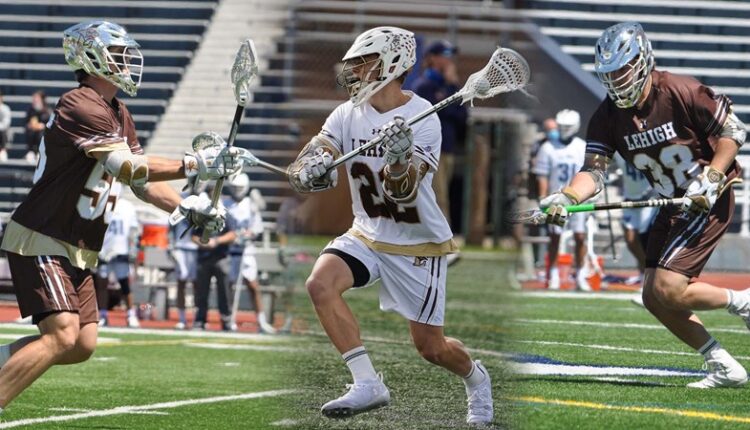 BETHLEHEM, Pennsylvania – A trio of Lehigh men’s lacrosse student-athletes have been named to the Academic All-Patriot League team as graduate student Conor Gaffney received the honor for a third consecutive season while graduate student Andrew Eichelberger and junior Tommy Schelling did the Academic all-leagues received this honor for the first time. Gaffney is two-time Scholar Athlete of the Year, while Eichelberger and Schelling were both named to the All-Patriot League for their performance on the field in 2021. The three winners are tied for a program record.

In the classroom, Gaffney has a grade point average of 4.0 in graduate school after finishing his undergraduate career at 3.95 in a dual major in mechanical engineering and integrated business and engineering (finance). Gaffney is a three-time CoSIDA Academic All-American (to join the second team in 2020 as one of only four Division I lacrosse student athletes to be recognized as Academic All-America). Gaffney is a two-time nominee for the prestigious Senior CLASS Award and a multiple winner of the team’s Scholar-Athlete of the Year Award. Gaffney is a member of the Tau Beta Pi Engineering Honor Society, the Pi Tau Sigma Mechanical Engineering Honor Society, and the American Society of Mechanical Engineers (ASME). He won the Elisha P. Wilbur Mathematics Award for first year performance in engineering mathematics. Gaffney has returned to Lehigh for a fifth year by offering a fifth year of study with no tuition fees as part of the President’s Scholarship Program, which recognizes outstanding academic achievement by undergraduate students.

Gaffney was selected in the most recent Premiere Lacrosse League Collegiate Draft (the very first selection of the Mountain Hawks) and was named Patriot League Faceoff Specialist of the Year 2019 by both USILA and Inside Lacrosse and an Post-Season Honorable Mention All-American. Gaffney received an Honorable Mention All-American from Inside Lacrosse this season. This year Gaffney endorses Junior Mike Sisselberger, who owns the number 1 nationwide faceoff percentages (80.3 percent, which if the season ends today would be an NCAA record).

Eichelberger has an impressive 3.88 GPA in his master’s degree in Technical Entrepreneurship. In the fall semester he was added to the Dean’s List. As a student, Eichelberger was included in the Dean’s List (for one semester GPA over 3.6), in the academic honor list of the Patriot League and the Faculty Athletics Council Award (for one semester GPA over 3.2).

On the field, Eichelberger was named the second team All-Patriot League this season. The midfielder, who was also called up to the second team in 2019, is a two-time team captain. Eichelberger is tied in seventh place in the team (12) and fifth in goals (10) and scored a hat trick against Lafayette on Senior Day. He has scored at least one goal in seven out of ten games.

Schelling has a strong 3.41 GPA in mechanical engineering. He has been included in the Dean’s List several times and achieved a perfect GPA of 4.0 this fall semester. After each of his first two years, he was inducted into the Patriot League’s academic list of honor and received the Faculty Athletics Council Award.

Schelling was named the first team in the All-Patriot League this season as he leads the Mountain Hawks in assists (22) and points (45). He ranks 19th nationally in points per game (4.50) and 21st nationally in assists per game (2.20). Schelling scored five or more points in seven of the ten games, including two seven-point efforts. He was named Patriot League Offensive Player of the Week after five goals and one assist at Colgate.

The No. 9 Mountain Hawks return on Friday when they welcome Colgate to the Patriot League quarterfinals. The game time is set at 4:00 p.m. on CBS Sports Network.

From the permanent record | Latest news