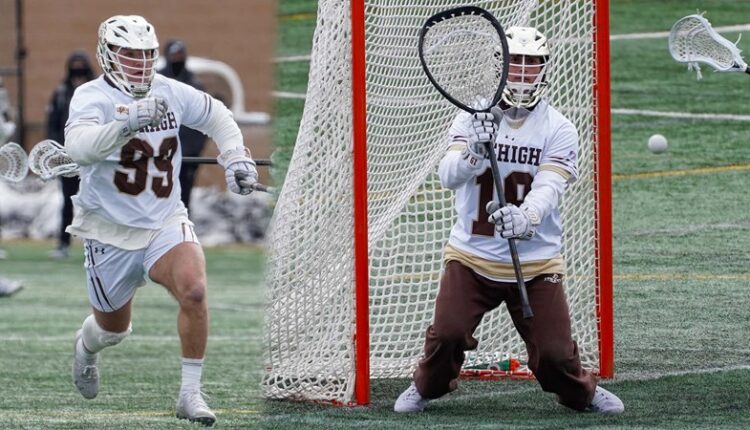 Sisselberger’s performance was really dominant, winning 16 of 19 face-offs with 10 ground balls, with most of the face-offs coming against the third team of the 2020 All-American Baily Savio (Savio was only 1 of 12 against Sisselberger in the afternoon). Sisselberger was 4 out of 4 in the first quarter and 9 out of 10 in the first half, helping the Mountain Hawks control possession. He also scored an important goal in the third quarter to put the Mountain Hawks 8-3 ahead, which rounded out Lehigh’s 6-1 run that made all the difference in the game. For the season, Sisselberger has won 78.0 percent of his faceoffs (32-of-41) with 20 groundballs.

Roll the Tape Sisselberger was sensational on Saturday and became @PatriotLeague Faceoff Specialist of the Week today! pic.twitter.com/BvrUeUoa1j

Spence was equally impressive, posting 17 high-level saves, with 16 of those stops coming in the final three quarters. Included were some timely saves as the greyhounds tried to get back into the game. After Loyola came up 9:16 with the remaining 9:16, Spence stopped the last four shots that got in his way. As a unit, the defense of Spence and the Mountain Hawks kept Loyola on the fewest goals in a regular season game since March 12, 2016 against Duke. For the season, Spence has 6.11 goals against average and 68.8 savings rates. Monday’s award marked Spence’s seventh weekly Patriot League award (sixth goalkeeper of the week).

James Spence was a brick wall on Saturday and that got him @PatriotLeague Goalie of the Week today 👌 pic.twitter.com/mQctEVtZgz

After a 2-0 season, Lehigh will be back in action when it travels to Bucknell on Sunday to face the bison. Game time is set to 12 o’clock

Rural or urban, we all bear the economic cost of gun violence. Here’s how to fix it | Opinion