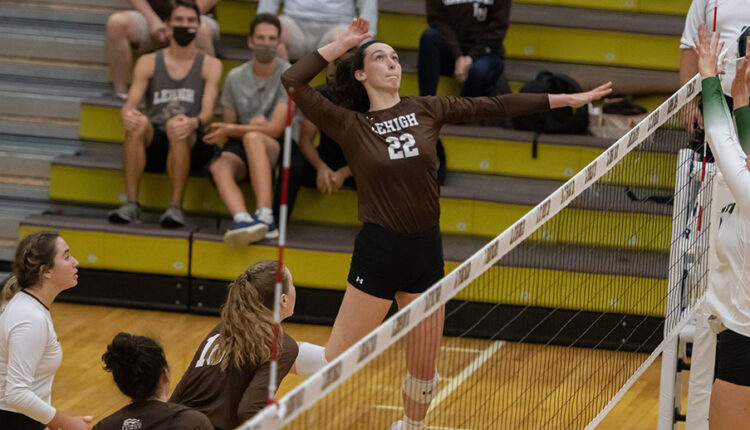 student in the first year Volleyball star Megan Schulte came after the second weekend of her freshman season satisfied with her team’s 2-1 record in the Lehigh Steel Tournament.

She didn’t realize until assistant coach Sarah Gomish drew her attention that she had got a total of 49 kills over the weekend with an attack percentage of 0.328.

Despite her accomplishments, Schulte said it came as a shock when she was named Patriot League Rookie of the Week on September 7.

Schulte grew up playing soccer and basketball, but decided to play volleyball in seventh grade.

“I immediately fell in love with how fast volleyball is compared to the other sports I’ve played,” said Schulte. “It’s such a team sport and something new happens every 30 seconds – that’s what ultimately moved me to pursue it for the long term.”

Over the years, Schulte’s game has evolved with one goal in mind: to play college-level volleyball.

Schulte said that while her mother was playing college volleyball, her mother never expected her to do the same.

After Schulte set this goal on her own, she said her parents were there to encourage her every step of the way.

“I was never forced to become a university athlete,” said Schulte. “My parents simply motivated me to try new things and always do my best. You are still my biggest supporter today. “

Schulte, a native of Boise, Idaho, said she was unfamiliar with Lehigh until she was contacted the summer before her junior year of high school.

After doing research to learn more about the academics and volleyball program in Lehigh, she attended a camp at the university where coach Alexa Keckler had the opportunity to watch her play.

Shortly after that summer camp in 2019, Schulte committed to Lehigh.

Schulte’s commitment to Lehigh worked for both sides.

Keckler said she was thrilled to hear Schulte’s recognition of the Patriot League and that it was well deserved.

“(Schultes) mentality this season has been that there is no stepping back,” said Keckler. “She is an incredibly determined and self-motivated player, which is also a lot of fun for her to train.”

Keckler said she hopes Schulte’s recognition in the Patriot League continues to motivate the team not to hold anything back on the pitch.

Freshman Emily Stewart said Schulte has made a huge impact on the team’s competitiveness and positivity.

“(Schulte) is really great at realigning the team and preventing us from just going through the moves of a game,” said Stewart. “It reminds us of the goals we have for our season, which gives our game that meaning.”

Fifth-year Sabrina Lancaster, who has hit 1,000 career kills, serves as an inspiration to Schulte to set a program record by the time she graduates.

Keckler said Schulte has many great leadership skills that she can’t wait to see progress.

“As she develops her athleticism beyond the front row game, I think she will continue to be a top performer on our team and hopefully in the Patriot League,” said Keckler.

Ask KHN-PolitiFact: Is My Cloth Mask Good Enough to Face the Delta Variant?