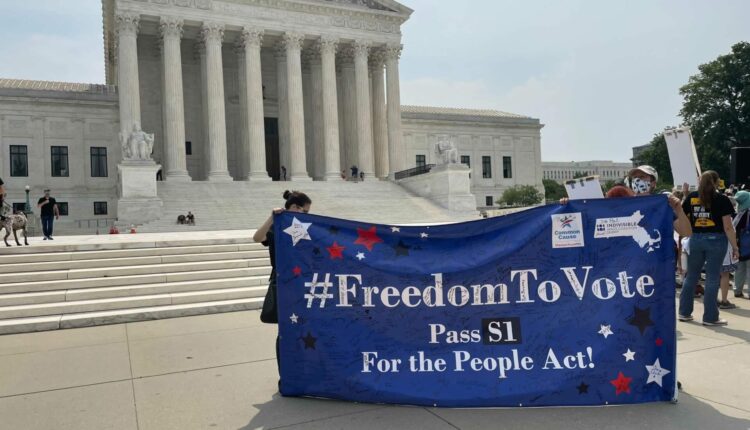 ‘Our democracy is in peril’: Women risk arrest in voting rights protest in D.C.

Protesters from the Poor Peoples Campaign rally outside the U.S. Supreme Court building in Washington D.C., on Monday, 7/19/21 (Capital-Star photo by Ariana Figueroa).

WASHINGTON — Diane Howard of Cleveland traveled to the nation’s capital with hundreds of other women to urge Congress to pass an elections overhaul and undo new state laws that restrict voting access.

A community activist for half a century, Howard said that this is not the first time she’s seen voting rights under attack. “What we did in the ‘60s is we kept protesting,” the Ohio woman said. “A lot of voter rights were restricted in the ‘60s.”

At 71, she was the oldest woman participating in the Poor People’s Campaign protest, titled “A Season of Nonviolent Moral Direct Action,” in front of the U.S. Supreme Court on Monday.

U.S. Capitol Police officers arrested about 100 of the women—although not Howard—for civil disobedience at the march, including Poor People’s Campaign state leaders from North Carolina, Minnesota, Wisconsin, Ohio and Maine. 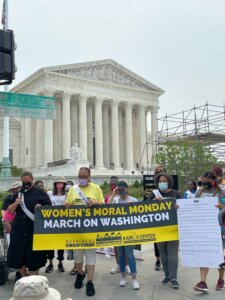 Protesters from the Poor Peoples Campaign rally outside the U.S. Supreme Court building on Monday, 7/19/21 (Capital-Star photo by Ariana Figueroa)

The protest followed the recent arrest of Rep. Joyce Beatty, D-Ohio, the chairwoman of the Congressional Black Caucus, who was taken into custody by Capitol Police Thursday. Beatty led a march to the Senate Hart Office Building atrium to speak out against the assault on voting rights. “Be assured that this is just the beginning,” she said in a statement.

For the Poor People’s Campaign, this was the first event in a weeks-long push calling on Congress to end the Senate filibuster, pass voting rights legislation, raise the federal minimum wage to $15 an hour and pass an elections and voting rights expansion package called the “For The People Act.”

On the steps of the court, the co-chair of the Poor People’s Campaign, Rev. Dr. Liz Theoharis, called on Congress to move on voting rights, warning that “our democracy is in peril.” Protestors taking part in the Women’s Moral March included women leaders representing 42 states.

“In this time, when our voting rights are under attack, and economic justice is being denied, we must, and so we are, calling out the immoral obstructionism of Congress,” said Theoharis, who was also arrested Monday.

The march was part of a nationwide attempt by  Democratic lawmakers, social justice organizations and activists to protect voting rights as Republicans in state legislatures move to introduce and pass restrictive voting laws in response to the 2020 presidential election won by President Joe Biden.

“The right to vote is sacred,” she said.

Michigan lawmakers introduced a sweeping package of 39 bills in March that would restrict the use of early voting drop boxes and require voters to cast ballots with a provisional ballot if they do not have a photo ID with them at their polling place.

“There’s a level of fear that every American needs to possess at this moment,” Taylor said.

She added that the U.S. Senate should get rid of the filibuster and pass the “John Lewis Voting Rights Act,” which would restore a pre-clearance formula set by the Voting Rights Act of 1965 that was struck down by a 2013 Supreme Court decision.

The pre-clearance formula required states with a history of implementing discriminatory voting laws, such as Arizona, Louisiana, Virginia and Georgia, among others, to get federal approval before making any changes to voting laws.

The Brennan Center, has found that as of May, state Republican legislators have introduced 389 bills with restrictive voting provisions in 48 states. Of those, 22 bills have been enacted, with 61 bills in 18 states still pending.

Those state Democrats will have to stay out of Texas for several weeks to prevent a quorum to block the special assembly. In the meantime, they have spent their time lobbying congressional Democrats to pass the federal elections overhaul.

However, the bill’s future is highly uncertain—it passed the House, but was blocked by Republicans in the Senate.

U.S. Senate Majority Leader Chuck Schumer, D-N.Y., has vowed to bring the bill to the Senate floor again, where he will not only have to find support from 10 Republicans to but also bring along Sen. Joe Manchin III of West Virginia, who has publicly voiced his opposition, to meet the 60-vote threshold to advance legislation.

On Monday, as demonstrators marched in front of the Senate Hart Office Building, the Senate Rules Committee was holding a hearing in Georgia on voting rights, with Sen. Raphael Warnock, along with other Georgia officials, testifying. It was the first field hearing held by the committee in 20 years.

At the Washington protest, JaMelle Hill, from Kathleen, Ga., said the recent voting law passed in her state harms not only voters but also low-income people. It’s more difficult for them to have stable housing, and obtain identification cards like a driver’s license, she said.

“Poverty affects everyone,” she said, particularly children and women of color.

The Urban Institute, a left-leaning think tank, has projected that the poverty rate this year will be 13.7 percent, or about 1 in 7 Americans “may have annual family resources below the poverty threshold.” In 2018, the U.S. Census estimated that 38.1 million people in the U.S. lived in poverty, or a rate of 11.8 percent.

Throughout the year, congressional Democrats have held multiple hearings on voting rights.

And while visiting her alma mater, Howard University, Vice President Kamala Harris announced that the Democratic National Committee would spend $25 million on a campaign to protect voting rights.

On Monday, the voting rights protestors formed a circle in front of the Senate Hart Office Building as Capitol Police officers pulled out plastic zip ties and arrested them, one by one.

“Forward together,” the crowd shouted as demonstrators were led away. “Not one step back.”