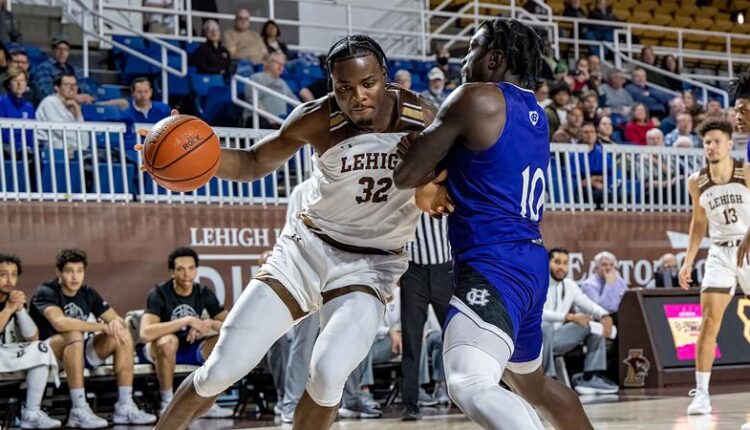 BETHLEHEM, Pa. – The Lehigh men’s basketball squad is back on the road with a trip to Worcester, Mass., as the Mountain Hawks take on Holy Cross Wednesday inside the Hart Center. Tip off is scheduled for 7 pm

Lehigh (11-8, 6-2 PL) comes into the game on a six-game winning streak, most recently defeating rival Lafayette 61-49, inside Stabler Arena on Saturday night. Junior Dominic Parolin led Lehigh in scoring and was one of four Mountain Hawks to reach double-figures, tying his career-high of 15 points and also grabbing three rebounds. This marks his fifth game scoring at least 10 points this season. Senior Evan Taylor recorded his second-straight double-double, totaling 10 points and 13 boards, scoring six points from the free-throw line to go with one assist and a blocked shot. Junior Jalin Sinclair and sophomore Keith Higgins Jr. also scored 10 points each, with Higgins Jr. contributing seven rebounds, a blocked shot and an assist while Sinclair reached double-digits for the second time this season with his 10 points, making two three- pointers and had a team-leading four assists, four rebounds and a steal.

Taylor, Higgins Jr. and Tyler Whitney-Sidney are averaging 13-plus points for the Mountain Hawks. Taylor recently reached 1,000 career points and is contributing 14.7 points with 6.4 rebounds per contest. Higgins Jr. averages 14.3 points per game and 1.9 assists per contest, while Whitney-Sidney is scoring 13.3 points per outing, and a team-leading 30 steals and 2.2 assists per game, along with 4.8 rebounds.

Holy Cross (7-14, 4-4 PL) enters Wednesday night’s game coming off a road win over Bucknell (80-73) to get back in the win column and sweep the series against the Bison, while snapping a four-game losing streak The Crusaders and Lehigh do not have any common non-league opponents, but both squads have defeated Bucknell, Navy and Loyola (Md.) so far this season. Holy Cross has five of its seven wins at home this season and returns to the Hart Center looking for another home victory.

Four different Crusaders are averaging double-digits, led by Gerrale Gates, scoring at a clip of 17.4 points and bringing down 9.2 rebounds in a game. Gates also leads the squad in assists (53), steals (32), and blocked shots (26). Will Batchelder and Bo Montgomery are both averaging 11.3 points per outing, with Batchelder leading the team with 56 made three-pointers while Montgomery dished out 53 assists and averages 3.7 boards per contest. Rounding out the top scorers is Joe Octave with 10.1 points per game with 11 steals and 4.2 rebounds per outing.

Holy Cross leads the overall series with a record of 44-29, but Lehigh is 7-3 in the last 10 meetings. Lehigh had won four straight matchups before falling to the Crusaders last year in the Hart Center on Jan. 28, 2022 (67-65) to split the season series a year ago. The Mountain Hawks claimed the first meeting inside Stabler Arena on Jan. 11 (76-58) and look to earn the season sweep of the Crusaders.

The Mountain Hawks return home to Stabler Arena on Sunday, Jan 29 to take on Boston University. Tip-off is scheduled for 12 pm and the game will be broadcast on CBS Sports Network and Fox Sports Radio 94.7 FM and 1230 AM.