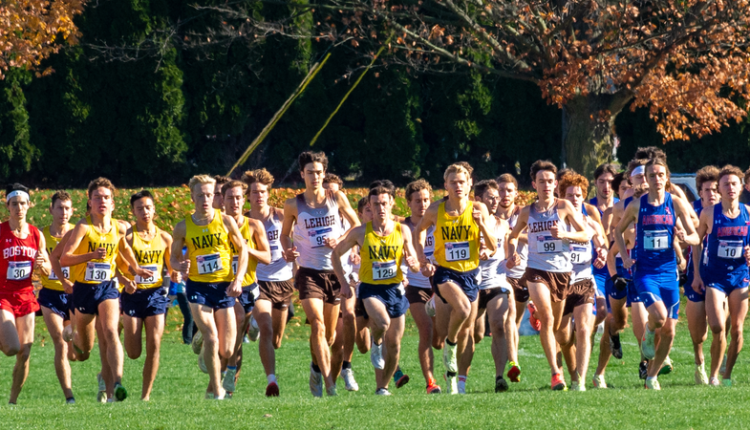 BETHLEHEM, Pa. – The Lehigh men’s cross country team will travel to University Park, Pa. for the second time this season to compete at the NCAA Mid-Atlantic Regionals on Friday at 11:30 am The Mountain Hawks are coming off of a sixth-place finish, highlighted by senior Tyler French’s second-team All-Patriot League performance at the Patriot League Championships.

French is making his senior year count for Lehigh, coming off of a second team all-league performance and also being awarded Academic All-Patriot League honors earlier this week. The senior was the top finisher for the Mountain Hawks at the Patriot League Championship on Oct. 29, finishing 14th overall with a time of 25:11.2.

The Mountain Hawks added six more runners in the top 60 at the championship, with sophomore Kevin Harvey finishing the 20th overall. Harvey was the second finisher for Lehigh, finishing the 8k in 25:22.7.

Senior Connor Melko and sophomore Aidan Lynch were the third and fourth finishers for Lehigh, finishing 31st and 44th, respectively. Melko finished the 8k in 25:42.3 while Lynch finished with a time of 26:04.7.

The Mountain Hawks’ top seven finishers will head to NCAA Mid-Atlantic Regionals alongside three other Lehigh runners. Graduate student Nick Wilson wants to compete in his final regional race for Lehigh on Friday morning. Wilson finished 79th at the Patriot League Championship with a time of 27:05.9.

Senior Riley Williamson and first-year Adam Barbato will also make the trip to Penn State for the second time this season. At the Patriot League Championship, Barbato finished 71st overall with a time of 26:46.2 while Williamson finished 88th with a time of 27:29.7.

Live results for Friday’s meet can be found at the top of the page. Check back on Friday for results and a full recap.

PSERS has delivered for school retirees — and Pa.’s economy | Opinion