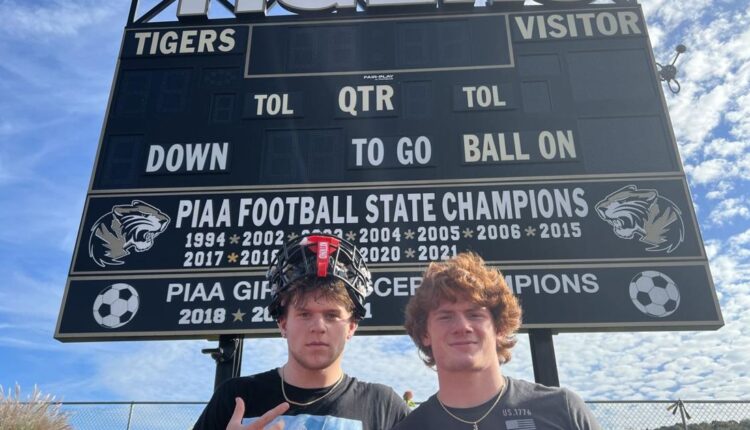 FRANKLIN TOWNSHIP — For a school that is known for its historic list of running backs, Southern Columbia’s never had a stretch quite like the last four seasons.

In last week’s District 4 title victory at Mount Carmel Area, two seniors topped the 3,000 mark in the record 30th district championship for the Tigers on the gridiron.

Fullback Wes Barnes rushed for 182 yards, giving him 3,014 for his career. Braeden Wisloski, who will switch from halfback to wide receiver when he heads to Maryland in college, ran for 193 yards to give him 3,008 yards in his Tiger tenure.

Not a bad run to have four runners rush for a combined 21,474 yards — more than 12 miles — in such a short span with at least one more game to be played this year.

“For both Braeden and Wes to do what they did on a snow-covered field last week, it was very impressive. In our first meeting with Mount Carmel, they handled us up front. Coming in, we knew the line had to hold their own, even with how undersized we were compared to them,” said Southern head coach Jim Roth. “If our line can open the initial hole, they can both hurt the opponent in a multitude of ways. As seniors, you can tell that they have elevated their games to an even higher level in the postseason, which is what you love to see.”

For Roth, the running game has been the catalyst for the championships over the years. He knows that must continue if the Tigers want to add another trophy to their display case.

“Over the years in tough playoff games, we have had backs that have been able to rip off long runs to help change the gam’s momentum in our favor. That can really demoralize a defense when the opposition’s offense has to work a long drive, and then one of our guys can score so quickly on a big play,” said the 39-year coach.

Through 13 weeks, both backs have averaged more than a first down per carry. Wisloski leads the team with 1,544 yards and 22 touchdowns on 12.8 yards per carry. Barnes, who missed six games with a torn ligament in his elbow, has exactly 900 yards and 11 scores on 11.3 yards per attempt.

This is the first year that they have shared the feature back role. The past two seasons, Gavin Garcia had been the focal point, as Wisloski and Barnes complimented him on their way to state championship victories.

“The backfield we had with all three of us together was extremely dynamic. They each have their own unique way to make plays. I believe we had one of the best Wing-T backfields in the nation,” said Gavin Garcia, who is now at Kent State after earning the Class 2A Player of the Year honor in 2021. “Both of these guys have tremendous speed. Braeden is so elusive on the edge and his speed is so hard to stop for any defense whether they know it’s coming or not. Wes has the ability to pound the rock and put the defense on their heels running downhill.”

LEARNING FROM THE BEST

Former Southern Columbia sensation Julian Fleming and current junior Isaac Carter have some things in common. Both have been gifted athletic talents, they grew up as neighbors in Elysburg and they have a competitive drive that any coach would love to have in their locker room.

They also apparently have the same mindset in championship games when their team is trailing 6-0 in the second quarter.

In the 2018 PIAA Class 2A State Championship game, Fleming faked a punt on his own that eventually led to a five-yard touchdown run by Gaige Garcia to give the Tigers a 7-6 lead against Wilmington. Southern would go on to win what was its ninth state title at the time.

If the Tigers can win a 13th PIAA Championship in December, with a lot of work left to do, a 4th-and-12 with 2:13 left in the second quarter last Friday will be considered the catapult play to help them get there.

In the District 4 Class 2A championship, Carter was back to punt. However, he had other intentions.

After providing a huge impact on the defensive line for the past three weeks after his soccer season ended, Carter himself decided what he was going to do as he was in position as the punter at the snow-covered Silver Bowl.

“I went out on the field with the mindset that I was going to fake it because I knew it was important to score before the half for momentum. In practice with our scouting, we recognized Mount Carmel overloads, which left a gap in the middle,” said Carter, who was an all-state kicker last year. “I remember watching Julian make the same decision in a state championship game and it was a similar scenario.”

Making the risk-reward decision a little bit more dicey was the fact that Carter didn’t have a visual of where the first down line to gain stood, as Jazz Diminick Field was coated with snow.

“As I went on the field, I set my eyes on where I needed to get to. The fact that there was a high snap actually helped because it froze their guys for a second. Thankfully, I was able to come down with the ball cleanly after jumping and then I ran. When I was tackled, I heard our crowd cheering loud, so I knew that I had the first down,” Carter recalled.

The coaching staff was presently surprised after the play took place, as it wasn’t scripted. At that point, Southern was looking to pin Mount Carmel deep and head into the half facing a one-score deficit knowing they could take the lead to start the third quarter with the football.

“That definitely wasn’t the call. I didn’t talk to him about it before the play, but it worked out. The last two times it happened, they both worked and were impromptu. I am not big into running gadget plays, but both players had the confidence to do it. Thankfully both of those plays worked for us in big moments,” said Roth with a chuckle.

Lost in the mix, on the very next play, the Tigers almost gave up possession of the football.

Barnes was stripped by Mount Carmel senior Garrett Varano, but junior center Robert Long was able to fall on it before two incoming Red Tornadoes could get to the pigskin.

“To make a playoff run, you have to come up with those kinds of plays. There are so many moments in the playoffs where one or two drives can make the ultimate difference in who advances and who is done for the year,” Roth said.

Barnes would score on the drive with less than 10 seconds remaining in the half to give the Tigers the lead for good, as they want on to beat the hosting Red Tornadoes, 48-18, to move on to a PIAA quarterfinal matchup with defending class 1A state champion Bishop Guilfoyle.

“Both of our programs have played in big games, so I don’t think either side has the edge in that category. It will come down to which team executes the most,” said Roth.