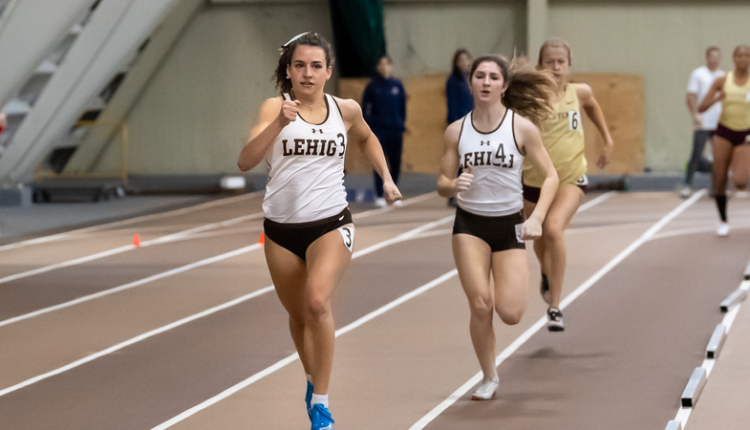 BETHLEHEM, Pa. – In its first two-meet weekend of the season, the Lehigh women’s track and field team showed no signs of slowing down as the team excelled both on the track and in the field at both the Villanova Invitational and Moravian Indoor Meet on Saturday. The Mountain Hawks finished Saturday with over 25 student-athletes earning top ten finishes.

Lehigh dominated at the Moravian Indoor Meet, which was held inside Rauch Fieldhouse on Saturday afternoon.

The Mountain Hawks started the day with four student-athletes finishing in the top ten in the long jump. Leading the way was sophomore Keisha Modi, who won the event with a mark of 5.34m. Senior Avery Roze (5.31m) and sophomore Lauren Roy (5.17m) followed suit, finishing second and fourth, respectively. Fellow sophomore Chelsi Chevannes earned a seventh-place finish with her mark of 5.00m.

Lehigh’s jumpers continued to shine in Rauch Fieldhouse on Saturday morning with Roy (10.43m) finishing second in the long jump and first-year Gretchen Haray finishing third with a personal best of 1.58m.

The Mountain Hawks’ throwers showed their strength in the shot put and weight throw at the Moravian Indoor Meet with first-year Jennifer Whipple (10.79m) leading the way with her fourth-place finish in the shot put. Junior Karina Roze (13.55m) and senior Emma Harrington (13.34m) earned their own top ten performances in the weight throw, finishing fifth and sixth, respectively.

First-years Lena Perlmutter and Sarah Goode were the final two Mountain Hawks to earn top ten finishes in a field event in Bethlehem. The duo finished seventh and eight in the pole vault with marks of 3.19m.

Lehigh asserted his dominance on the track with two Mountain Hawks claiming first place finishes at Moravian’s meet. In the 5000m, sophomore Savanah Beavers won the event with a personal best of 17:50.29 while graduate student Lauren Powell won the 400m with a new personal best of 1:00.67. Junior Abigail Tenreiro joined Beavers in the 5000m, finishing in 18:28.30 to secure a third-place finish.

First-year Elisa Brear was the final Mountain Hawk to earn a top ten finish in Bethlehem on Saturday. Brear finished eighth in the 3000m with a time of 11:00.67.

While some Mountain Hawks excelled in Bethlehem at the Moravian Indoor Meet, others continued to shine at the Villanova Invitational at the Ocean Breeze Complex in Staten Island, NY

Lehigh’s distance runners showed no signs of slowing down as they placed three student-athletes in the top ten in the mile. Junior Christina Yakaboski was the top finisher for Lehigh, claiming a sixth-place finish with a personal best of 4:56.50. Seniors Elena Perez-Segnini (5:03.31) and Andrea Miller (5:04.42) followed suit, finishing ninth and tenth, respectively,

Seniors Ashley Struck and Ashley Griesmeyer led Lehigh’s sprinters with solid performances in Staten Island, NY on Saturday. Griesmeyer finished fifth overall in the 60m hurdles with a time of 8.90 while Struck finished fifth in the 400m (57.47) and sixth in the 200m (25.39).

Lehigh earned his final top ten finish on the track in the 4×400, finishing sixth overall with a time of 3:56.03. Struck competed along with junior Simone Davey, sophomore Stephanie Webb and first-year Amber Barrios.

The Mountain Hawks brought energy into the field events, claiming four more top ten finishes. Leading the way for Lehigh was first-year Laura Reigle, who finished second in the pole vault at the Villanova Invitational. Reigle, who claimed her second Patriot League Rookie of the Week award this week, finished Saturday with a mark of 3.75m. Sophomore Randi Conroy joined Reigle in the top ten, finishing sixth overall with a mark of 3.45m.

Lehigh wrapped up Saturday with three jumpers claiming top ten finishes of their own. In the long jump, sophomore Casey Talamini-Kelemen finished seventh overall with a mark of 11.25m. Junior Kerry Perna (1.60m) was the top finisher for Lehigh in the high jump in her eighth-place finish. First-year Melanie LaCorte followed suit, finishing ninth in the high jump with a mark of 1.55m.

The Mountain Hawks will return to Bethlehem to host rival Lafayette inside Rauch Fieldhouse on Saturday, January 28 in the Rivalry presented by Lehigh Valley Orthopedic Institute.