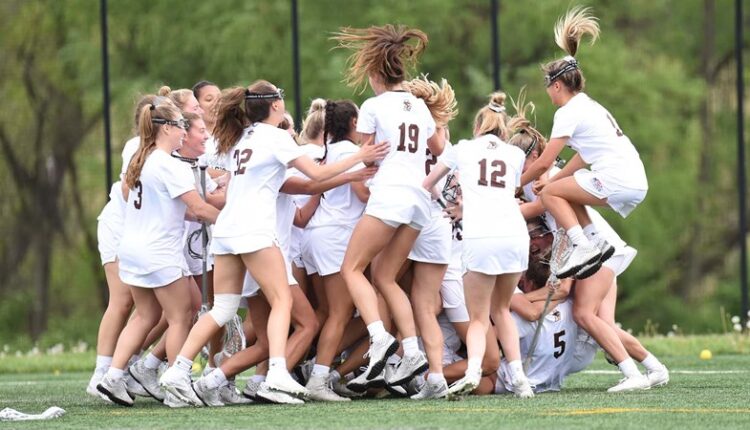 BETHLEHEM, Pennsylvania – Lehigh’s women’s lacrosse head coach Jill Redfern announced Tuesday the new Mountain Hawks class for 2025, which will include eight student athletes. Four midfielders, two defenders, an attacker and a goalkeeper make up the class that will become the Mountain Hawks family in the coming fall semester.

“Our recent deal resulted in a lot of lost production in statistical areas,” said Redfern. “We are confident that this new class will play a role in strengthening these areas. They look forward to coming to campus and we look forward to welcoming them and their enthusiasm for Lehigh.”

DeLitta was a four-year varsity starter and two-time captain at Rye Neck High School. DeLitta broke Rye Neck’s career save record, hitting 559 (54 career save percentage) in three seasons. In 2021, she was recognized as an All Section and Team MVP with 189 saves (62 save percentage). DeLitta was named a second all-star team pick by Westchester / Putnam County and was named a Outstanding Athlete from Rye Neck High School. In 2019 it was given the honorable mention of All-Section and All-League. DeLitta was appointed to the Under Armor All-America Underclass Team for CONNY. She was an Under Armor 150 selection for three years in a row and won the first team awards for the US Lacrosse High School for the Hudson Valley. As a multisport athlete, DeLitta was also a four-year college field hockey starter, was named Captain Senior Year, and received the Honorable Mention of the Entire Section, All-League, and Team MVP. As captain of the very first ice hockey team of the NYS Section One Girls Varsity, she led her team to a section championship and was awarded the All-Section. DeLitta played club ice hockey for 12 years and won seven regional / league titles. In the classroom, she was a member of the National Honor Society, was put on the sports director’s honor roll, and made the honor roll every semester every four years.

Why Lehigh? “I chose Lehigh because of the university’s great academics, beautiful campus and competitive sports programs. I also have the opportunity to learn from great coaches and be surrounded by an incredible team environment.”

DeMarco achieved success as a standout midfielder and captain of Northport High School. Individually she was called All-League and All-Division, while she was also called Northport Lacrosse MVP and the Suffolk County All-Tournament Team. DeMarco received the NESPY Best Female Athlete Award and the NESPY Female Icon Award. She helped her team reach the 2021 league and the Long Island Lacrosse Championships. Two years earlier, DeMarco and Northport won the 2019 New York State Title. DeMarco is an outstanding multi-sportsman and also won the 2021 Soccer League Championship and received the Sportime Travel Volleyball Individual Sportsmanship Award. Strong in the classroom, she received the NASA Directors Award for Excellence in Physical Education and was named Town of Huntington Scholar-Athlete of the Year. DeMarco was a member of the National Honor Society, the National Business Honor Society, and the National World Language Honor Society. She attended the Academy of Finance, Key Club, and was Treasurer of the Physical Education Leaders Club. She was also a founder of the Students for 60K Environment Committee, attended DECA, the ALS Club, and was a member of the Student Superintendent Advisory Board.

Why Lehigh? “I chose Lehigh because of their excellence in athletics and science. When I first walked on campus, I knew it was going to be for me. The student community and atmosphere were top tier compared to other people unsurpassed.” University. The athletics department was exceptionally friendly and welcoming, which ultimately led me to decide where to continue my lacrosse career. I look forward to visiting Lehigh University this fall and discovering new opportunities this university has to offer. “

DiConza was an All-State First-Team Award winner as a senior at Staples High School. They also collected the first team All-FCIAC (Fairfield County Inter Athletic Conference). The senior captain was a four-year varsity starter and Defensive Player of the Year – along with the team MVP – as a senior. DiConza received an Honorable Mention from Gametime CT All-State in her senior year and was an Academic All-American. In the second year, DiConza was given the Honorable Mention All-FCIAC and was appointed to the CT national team. DiConza, also a stellar field hockey player, was a four-year varsity member and three-year starter who received a senior offensive MVP. She was also honored as a second and senior member of the All-FCIAC. DiConza helped her field hockey team to two FCIAC championships and four state titles. In the classroom, she was placed on the first honor roll in all four years of high school, received the Spanish seal of biliteracy, and was a member of the Society of Honor for Social Studies.

Why Lehigh? “I chose Lehigh because of its high academic reputation and its alumni network of business schools. In addition to an amazingly competitive lacrosse program with a welcoming team culture.”

Eby was a four year old college lacrosse and basketball starter at West Potomac High School. She was named the first team all-district and the second team all-region in lacrosse. Meanwhile, Eby was an all-district and all-region first-team award winner in basketball. In the classroom, she was on the honor roll for four years and graduated as an honorary graduate (4.0 or higher every four years).

Why Lehigh? “After visiting the campus and getting a feel for the team, the coaching staff and the environment, I fell in love immediately. The campus has a great feeling that reminds me of a home away from home. Not only that, it was just what I wanted to be academically and athletically and to be very competitive on both ends. “

Why Lehigh? “I chose Lehigh because of the combination of excellent academics and athletics. The team dynamics are so welcoming and friendly, and at the same time create a competitive environment in which I can grow as a student, as an athlete and, above all, as a person.”

O’Connor was a freshman and sophomore college starter at Springfield High School before missing her junior and senior seasons due to COVID-19 and injuries. O’Connor has received a number of awards and was named to the Philly National Tournament Team 2, while she was named to the All-Central League and Honorable Mention All-Delco in 2019. She was the captain of both lacrosse and soccer. O’Connor earned four college degrees in football. Outside the field, she was appointed to the National Honor Society, served on the Student Council, and served on the Community Service. She also received the President’s Education Awards Program (bottom of the top 25 percent in the class ranking – 34/302).

Why Lehigh? “I chose Lehigh because of its highly competitive academics and athletics, as well as the excellent facilities and opportunities for undergraduate students. Lehigh successfully prepares its graduates for life and work after college.”

Pino was a four-year-old college lacrosse and soccer player at St. Paul’s who started out in both sports for three years before injuring himself as a senior. Pino was both a lacrosse and soccer captain in her career and received the Leadership Award for lacrosse as a senior and MVP in her junior year in soccer. Outside of the field, she was class president for three years before becoming all-school president in her senior year. Upon graduation, Pino received the John M. Curley Jr. Leadership Award for her role as President. Pino was strong in the classroom and made the honor roll every semester.

Why Lehigh? “The perfect balance between strong academics and competitive sport and at the same time on a beautiful campus.”

Warfield was a four-year varsity runner and an Under Armor All-American at St. Mary’s of Annapolis. As a team captain, she won the Coaches Award as a senior. Warfield played club lacrosse for Maryland United. A multi-athlete, she helped the St. Mary’s cross-country team win their first conference championship. Warfield holds the school record in the 500-meter run and in the 4 x 400 relay. In the classroom, she was an Honorary Student with a GPA of 3.85 and is a member of the National Honor Society.

Why Lehigh? “When I go to different colleges, I wanted both academically a great school and a very competitive lacrosse program. That’s exactly what Lehigh offered. Not only that, but I love that my family and friends see most of my games because of the conference we’re attending. Also, it’s a beautiful campus that is the perfect size for me. Go Lehigh! “

Roads and bridges aren’t enough. For a strong economy, we need to invest in ‘care’ infrastructure | Opinion