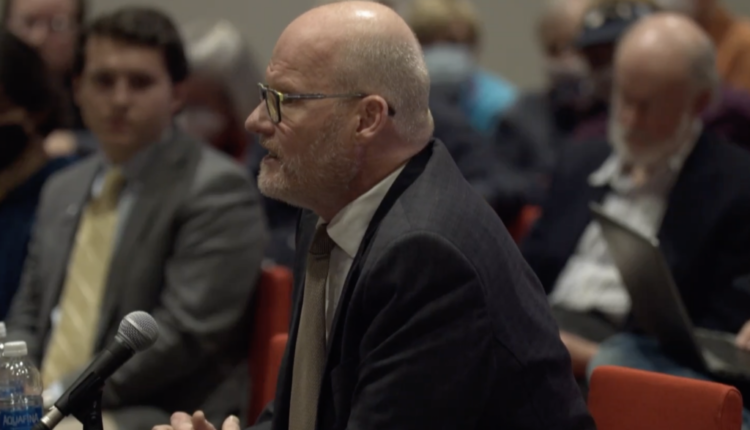 PITTSBURGH – State House Speaker Mark Rozzi  kicked off a statewide listening tour in Pittsburgh on Wednesday night, with his Workgroup to Move Pennsylvania Forward, which he called an attempt to break a partisan logjam in the House over operating rules.

Rozzi and the panel heard from sexual abuse survivors, gun violence reduction advocates, and residents who said they were tired of the gridlock in Harrisburg.

“The purpose of this tour is to hear from you, the people. A decade of ever-increasing hyper partisanship has left Harrisburg in a gridlock,” Rozzi said.

He added that many of his colleagues would be fine with allowing things to continue as they have for the past decade.

“But I refuse to continue to do the same thing and expect different results,” Rozzi said. “Instead, I want to do something that my colleagues may consider radical and that is I want to hear directly from the people of Pennsylvania.”

First up to speak were members of the community.

John Nagle, a Pittsburgh resident, and professor emeritus at CMU, said he was concerned about the power that special interests and their lobbyists appear to have in Harrisburg.

“The rules should require that bills with broad appeal do get public hearings and do get voted on. Of course, special interests could still lobby, but they would have to lobby more representatives in order to generate enough votes in the General Assembly to defeat a bill that otherwise has broad support,” Nagle said. “That would make it appropriately more expensive and help to level the playing field for grassroots supporters and their backbench representatives.”

“It’s a worsening plague that leaves no corner of our Commonwealth untouched, from firearm suicide that most impacts rural parts of Pennsylvania, to community-based homicides concentrated in cities like Philadelphia and Pittsburgh, but also Allentown, Erie and Lancaster,” Fleitman said.

He noted there had been two mass shootings in California just in the past two days, similar to the one at the Tree of Life synagogue in Pittsburgh’s Squirrel Hill neighborhood in 2018 that left 11 people dead.

“We can no longer afford to live this way. And we’re asking you to use your leadership to do something about it,” Fleitman said.

Khalif Ali, executive director of the good government group Common Cause Pennsylvania, told Rozzi his organization is concerned about the way legislators have attempted to use amendments to the state constitution.

“The constitutional amendment process was never meant to be used as a means to advance vetoed and failed legislation, or to punish the court for decisions that weren’t favorable to a party’s agenda,” Ali said.

He pointed to Senate Bill 106, a multi-pronged constitutional amendment package, passed by the General Assembly last year, that seeks to, among other things, change the state constitution to say there was no constitutional right to an abortion in Pennsylvania.

It amounted to “a deliberate move to leverage a very sensitive issue to advance a political agenda,” Ali said.

“We’ve gotten to a point where some elected officials are spending much more time finding loopholes in the system than moving towards a democracy that works for everyone and collectively solving our pressing societal issues,” he added.

“What worries me the most is the fact that we’re getting dangerously close to normalizing this behavior. This listening tour is happening at the exact right time and depending on how the information is used, it could establish a basis for fixing a broken Harrisburg,” Ali continued.

Elizabeth Stelle, director of policy analysis at the conservative-leaning Commonwealth Foundation, chastised Rozzi for adjourning the House until Feb. 27 to conduct the listening tour, which so far has stops planned in Philadelphia and Wilkes-Barre.

“There is an urgent need for leadership and a willingness to move forward right now,” Stelle said. “The pursuit of this listening tour is drowning out the voices of Pennsylvanians eager to make their voices heard through the time-tried democratic process of representative government. If you want to hear what voters think, let their elected representatives vote.”

Sean Dougherty, president of the Survivors Network of Those Abused by Priests (SNAP), said he and other survivors of childhood sexual assault were tired and angry.

“We are tired of being used,” he said. “Why are child sex abuse survivors always being used as a political beach ball?”

He lamented what he called the lack of bipartisanship in the Legislature, and said Rozzi’s assertion that Harrisburg was “broken” was not correct.

“I would argue with you that it is not broken. It is working exactly the way the recent Legislature has set it up to work for the lobbyists, for the special interests, and for the legislators,” Dougherty said.

Rozzi, who also is an abuse survivor, reiterated at the close of the meeting that he wanted to see the amendment that would give legal relief to childhood sexual abuse vicitms pass as a standalone bill, saying attempts to tie up the legislation with a voter ID amendment  was “disgusting” and “shameless.”

“But there’s nothing more than I want to see this institution get up and running,” Rozzi said. “And we’re going to continue the work to get that done.”

The listening tour heads next to the Cardinal John P. Foley Campus Center at St. Joseph’s University in Philadelphia on Friday.