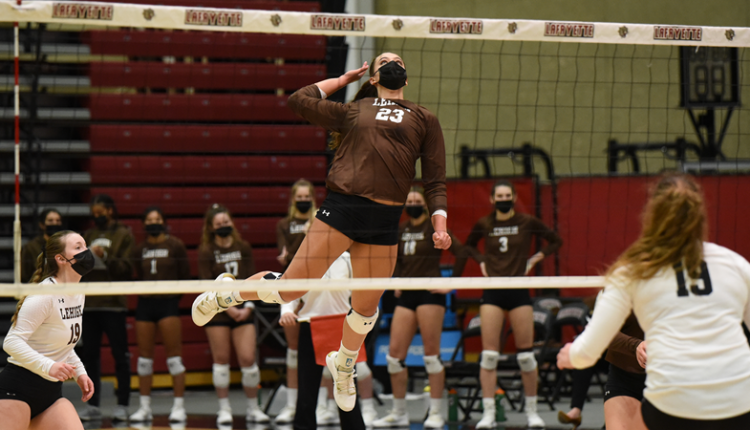 WORCESTER, Mass. – The Lehigh volleyball team, which wanted to get a grip on one of the four postseason berths of the Patriot League tournament next weekend, could not overcome Holy Cross on Friday evening and fell in straight sets (26-28, 13) -25, 21 -25) drop to 3-5, with one game left against the Crusaders on Saturday.

Like most games this season, the Mountain Hawks were led by the three-headed monster of seniors Hannah Wright and Sabrina Lancaster and newcomer Lylah Washington. Wright and Lancaster finished with 11 kills each, while Washington recorded their second straight double-double with 10 kills and 11 digs.

Lehigh got off to a great start in the first set and used a 9-3 advantage early on. The Mountain Hawks took the lead 6-6, but Holy Cross took seven of the next eight points to tie it at 13. Both teams paced back and forth while Lehigh made it 24:20 at match point, but pushing 8-2 to close the set gave HC a 28-26 win.

The Crusaders controlled the entire second set, led with up to 12 points late in the set and held on to a 12-point win with a decision of 25-13.

While Lehigh was able to pull Holy Cross several times in the third set, the Crusaders never let the Mountain Hawks out in front again. Lehigh was within a point at 16-15, but three kills and one offense from Sophia Meagher left the Crusaders up at 20-15. Four direct Lehigh points, led by Wright and Lancaster, had Lehigh back in one, but Holy Cross won five of the last seven points, 25-21 and the 3-0 win.

The Mountain Hawks never really gained a foothold from the end of the first set, only hitting .084 for the match with 26 mistakes.

Alina Lam registered a double-double with 17 assists and 12 digs, while Ally Thaw finished Libero with 12 digs. Sophie Robinson was the Mountain Hawks’ lead blocker with three block assistants when the team ended up as a team with four.