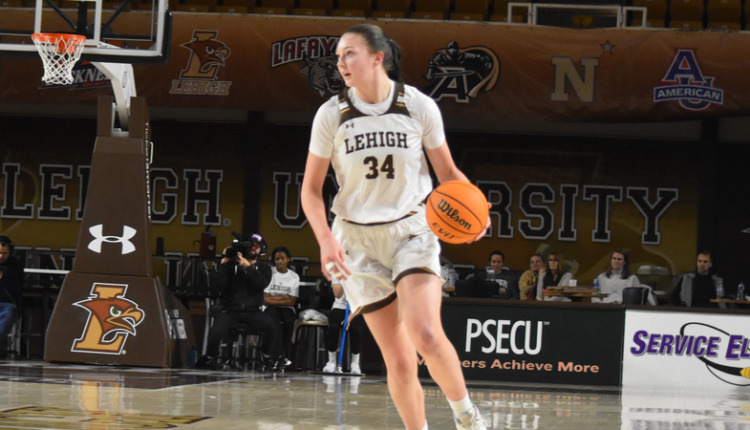 Lehigh Scores 19 Points in Overtime to Prevail Over Loyola

BETHLEHEM, Pa. – The Lehigh women’s basketball team got it done in overtime, scoring 19 points in the final five minutes of the game to come away with a 72-65 win against Loyola Wednesday night at Stabler Arena.

“First thoughts are you gotta find a way sometimes,” said head coach Addie Micir. “Scrap, claw, fight. Really proud of how we ended the fourth quarter. It just showed some resilience, and we looked like us in the final five minutes of overtime, scoring 19 points.”

Down three seconds with 7.4 seconds left, Lehigh had the ball. Mackenzie Kramer knocked down a three-pointer with 1.4 seconds left to tie the game and after Loyola’s last second shot did not fall, the game went into overtime.

“We practice that play call all the time in terms of practicing end of game situations,” Kramer said. “The team always has a lot of trust in me and in that play. I missed the shot before that and a lot of shots throughout the game, so just to know that the team has confidence in me to knock that down, you can’ t not be confident in yourself when you step in to take that knowing the team is behind you.”

This was the first overtime game for Lehigh since Jan. 2, 2021, when the Mountain Hawks defeated Lafayette 81-75.

Not only was Kramer big in sending the game to overtime, but she was huge all around after halftime, tallying 16 points in the second half and overtime. Kramer scored 10 of her 21 points in the fourth quarter alone.

Lehigh had three three-pointers in overtime, which would end up being the difference in Wednesday’s game. Loyola continued to foul Lehigh at the end to try and claw back, but it would not be enough.

While Lehigh held a lead for 32:45, it was a close and back-and-forth game. There would be eight lead changes and six ties. Loyola had a five point lead with 2:57 remaining, which was the biggest lead of the game for the Greyhounds.

Frannie Hottinger was also big down the stretch before fouling out of the game. She had six points in the fourth quarter, finishing with 15 points. Lily Fandre had a three-pointer in overtime and totaled 11 points. Fandre also notched a career-high of six assists.

Loyola controlled the boards Wednesday night led by Lex Therien, who had 28 points and 15 rebounds. Six of those were offensive rebounds. The Greyhounds held a 52-30 advantage on the glass.

Both teams struggled to take care of the ball as Loyola had 21 turnovers, while Lehigh had 18.

At the half, Lehigh held a 28-23 lead. The third quarter would be a defensive battle between both teams. Loyola had 10 points, while Lehigh scored only six and saw his lead cut to one heading into the final frame.

The Greyhounds had 20 points in the fourth quarter, and Lehigh totalled 19 to force overtime.

“We found a way, and that was our goal all year,” Micir said. “We put ourselves in situations, both in the non-conference and early in conference play, where we had to find a way. Seeing our execution level up in the fourth quarter and seeing it level up in overtime, I’m really pumped for everybody.”

The Mountain Hawks will travel to Easton, Pa. on Saturday for a 2 pm game with Lafayette. The game will be broadcast on ESPN+ with audio coverage on Fox Sports Radio 94.7 FM and 1230 AM and LVFoxSports.com.