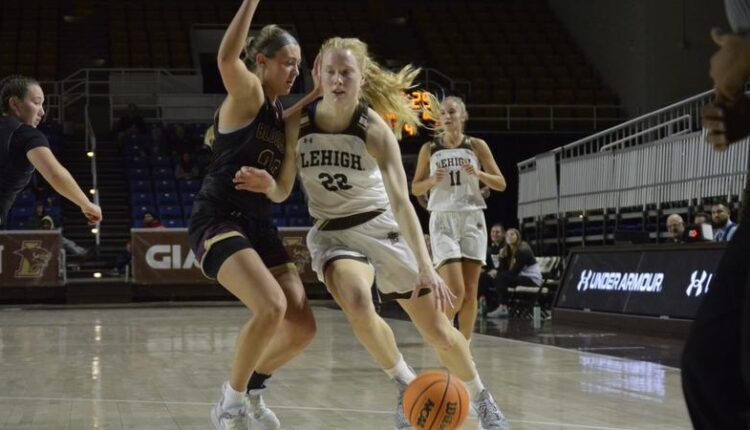 Lehigh Rolls to Victory Over Bloomsburg

The Mountain Hawks improved to 2-2.

It marked the second straight game the Mountain Hawks scored at least 90 points after putting up 99 points against Minnesota.

Mackenzie Kramer opened up the scoring for Lehigh with two three-pointers followed by a three-pointer from Frannie Hottinger. The Mountain Hawks would not return down from there.

Kramer and Hottinger both finished with 18 points. Lehigh had two more players finish in double-figures. Ella Stemmer scored 14 points in 14 minutes. Stemmer was just one off of her career high. Fabienne Eggenschwiler was the other Mountain Hawk to finish in double digits. The junior had a career high of 10 points.

The Mountain Hawks were 16-from-23 from beyond the arc in Friday’s game, which was just one shy of a Patriot League and a program record of 17 made 3-pointers, which Lehigh set against Loyola last season.

“We wanted to have a great inside-outside game as well,” Micir said. “We knew we had a size advantage. I thought even if we didn’t score inside early on, it actually opened up Kenz and everybody from the perimeter and allowed us to have a barrage of threes.”

Lehigh had plenty of contributors Friday night as 49 of Lehigh’s 97 points came from the bench. Eleven different players scored for the Mountain Hawks.

“It’s really important,” Micir said. “We talk a lot about having a tone of depth and that’s our strength. So if we want to run, and we want to play fast, we have got to have a lot of different people able to step up and ready to step up. “That’s what we tell everybody. Whether it’s this game, whether it’s the next one, or if it’s another one down the line, when your number is called, be ready. I thought a lot of our players did a good job at being ready today.” .”

Senior Anna Harvey had an incredible night as well. The senior dished out a career-high of 11 assists. Her previous career-high was four.

Lauren Kirsch’s nine points were a team-high for the Huskies.

Lehigh will head to Drexel on Tuesday for a 6 pm matchup against the Dragons. The game will be streamed on FloHoops.

“A big thing is staying disciplined,” said Stemmer. “Even if we’re not playing a big team that we have in the past like South Dakota State or Minnesota, we still have to bring it each and every day. We have talked about coming in off of off days, we don’t have as much energy, so we’re just going to try to bring the same level of intensity and the same level of energy each and every day.”

Reproductive coercion is a form of domestic violence | Denise Johnson

Lehigh Back on the Road with Trip to Saint Francis