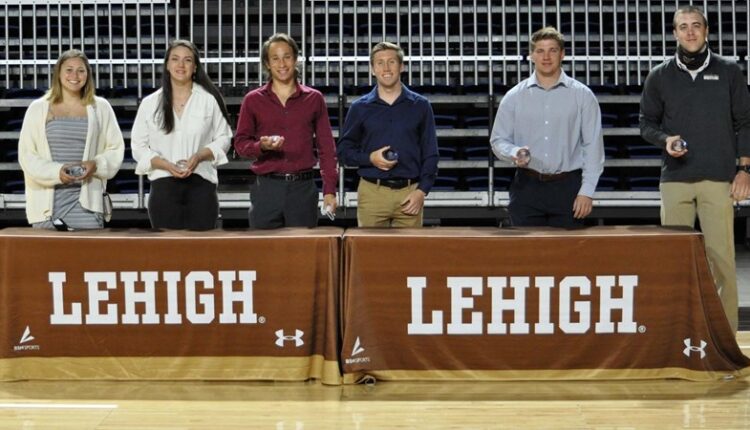 BETHLEHEM, PA. – Lehigh Athletics celebrated the 2020-21 academic year achievements with the return of the annual Student-Athlete Awards convention on Monday May 10th. This year’s gathering included the return of a face-to-face event with a limited number of the student athletes and coaches gathered in the Stabler Arena. The gathering was streamed on Lehighsports.com for those unable to attend.

The gathering included the announcement of the Lehigh Department award winners, the annual year-end highlight video, and recognition of the university award winners and sports students.

Conor Gaffney, of the men’s lacrosse team, received three awards, including the department’s top award – the Graduate Scholar-Athlete of the Year award. Gaffney was also recognized as the Department’s Outstanding Male Athlete and was one of six recipients of the Distinguished Achievement Award.

Gaffney is a three-time CoSIDA Academic All-American who had a GPA degree of 3.94 while pursuing degrees in mechanical engineering and finance. He is a two-time Patriot League Scholar-Athlete of the Year for men’s lacrosse and a three-time All-League Academic Award winner. On the field, Gaffney was a two-time All-Patriot League first-team selection as the Faceoff Specialist and was the Patriot League Faceoff Specialist of the Year as well as an Honorable Mention from All-American as a Junior in 2019. Gaffney is the Patriot The League career leader in floor balls.

The Karen A. Adams Graduating Female Athlete Award was presented to Sondra Dickey of Women’s Lacrosse. Dickey was recently named Patriot League Midfielder of the Year and helped lead the Mountain Hawks to the Patriot League championship game. She is now a three-time All-Patriot League selection and so far a two-time IWLCA All-Region Award winner. Dickey ended her career with a school record of 41 caused sales, aided by a late-season surge on the defensive side of the field.

The John Steckbeck Award, given to the best freshman student, went to Julia Gatelein of the field hockey team. Gatelein was a second selection of the All-Patriot League and stood with three goals for the team leadership, including the only record in Lehigh’s 1-0 win over rival Lafayette.

Lehigh also recognized three sophomore athletes from spring sports who were put on a watchlist last year after the 2020 spring season was canceled. The athletes recognized as finalists are Emily Cimino from softball and Emma Eberhardt and Gabby Schneider from women’s lacrosse.

The finalists for the J. Daniel Nolan Prize, awarded to the best male student athlete in the freshman year, were announced at the convocation. The winner has not yet been determined. Two finalists will start in the spring season. This year’s finalists are Scott Cole from men’s lacrosse, Conor Reilly from men’s athletics and LaTreil Wimberly from football.

Three second-year spring sport male athletes were also recognized as finalists after being placed on a watch list last spring. The three finalists from spring 2020 are Connor Melko from cross-country skiing and athletics, Christian Mule from men’s lacrosse and Adam Retzbach from baseball.

Women’s basketball’s Mariah Sexe received the Mary O’Hurley Leadership Award, given to the department’s best female graduate. One of Lehigh’s team captains, Sexe, was instrumental in leading the Mountain Hawks through the pandemic-stricken 2021 season that culminated in Lehigh’s fourth championship in the Patriot League tournament.

The John A. Cable Award, given to the distinguished male director of the department, went to Divine Buckrham from the football program. Buckrham served as team captain for the spring 2021 season and was also active on campus, where he was a member of the Lehigh Student Senate and held a leadership position in Lehigh’s Student-Athletes of Color organization.

The division’s best service award, the Marlene “Linny” Fowler Service Award, went to Mary Clougherty of women’s basketball. Clougherty acted as co-captain for TIDE (Combating Inclusion, Diversity and Justice) and was piloted by the university as a freshman seminar on the history of racism (with teammate Katie Rice and Buckrham) as part of a “creative ideas” initiative excellent for turning Lehigh into an anti-racist institution. “

In the fifth year, Owen Quinn of the men’s golf team won the division’s Sportsmanship Award. Quinn has served in many areas during his time at Lehigh. He brought leadership and gentlemanly play to the golf course, was active in programming department heads, and brought school spirit and positivity to the athletics department as one of the most visible and vocal supporters of any Lehigh sports programs.

Six student athletes received the Distinguished Achievement Award. These recipients are senior student athletes who have demonstrated a high level of scholarship, significant athletic achievement at the league level (and beyond), and demonstrated service to the institution. The winners included Gaffney, Sean Brown and Jeff Kirshenbaum, both men in cross-country skiing and athletics, Ellie Falk from woman rowing, Megan Fennell from swimming and diving and Jake Jakobsen from wrestling.

Softball manager Michael Chavez was honored with the Phillip J. Sclar Award, which recognizes an undergraduate student employee or manager who exemplifies the spirit and character of the late Phil Sclar.